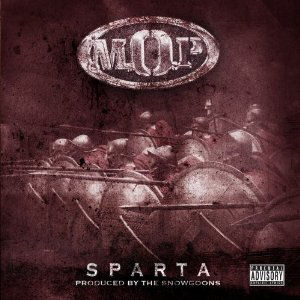 What’s the difference between Sparta and Brownsville? Based on the accounts provided by Billy Danze and Fizzy Womack since their 1994 debut “To the Death,” one might almost confuse the two – both are zones of constant warfare over disputed territory marked by armed combat, mean mugs, horn fanfares, pounding battle drums, and, oh yeah, a lot of yelling. Only two years removed from their celebrated “Foundation” LP in 2009, the Brownsville bullies are back with a lean ten-track album fully produced by the German and Danish production duo Snowgoons, which on paper sounds like a match made in heaven – or depending on your perspective, hell. Snowgoons have made their mark on a bevy of hardcore East Coast rappers’ projects over the past decade, including their full-length collaboration with Reef the Lost Cauze released only two weeks ago, and given their track record a more appropriate title than “Sparta” could hardly have been chosen – their music is loud, epic, violent, and tailored for the battle arena, a description that also captures M.O.P. to a T.

Whether you’ve been down since ’94 or your First Family knowledge only goes as far as “Ante Up,” you know generally what to expect on an M.O.P. outing: furious beats and livid, in-your-face rhymes. Somehow, this formula never gets old, and at this point it’s conceivable that a second generation of stick-up kids and high school football players appreciates the fact that nothing pumps you up or entertains like a Mash Out Posse track. Seventeen years in, their energy remains legitimately unparalleled – I could be sitting in a library and M.O.P. would make me want to smash stuff. Call them meatheads or one-dimensional if you will, but M.O.P. is truly one of a kind. Fame and Danze’s chemistry is on full display from the opening title track, proclaiming “This is SPARTA NIGGA, we the HARDEST NIGGAS,” trading bars over a pounding pipe organ-laden track. At this point I’ll refrain from using caps because it should be assumed that any M.O.P. quote would most accurately be portrayed in all caps. “Back At It” sounds like a piece from the “300” score with its epic horns and builds a hook out of grunting soldiers.

Backed by Snowgoons’ rock-solid production, Fame and Danze deliver some truly memorable performances. Their punchlines are on-point throughout (“I’m the ghetto Mr. Universe, call me Lou Ferrigno / I push a lot of iron, I don’t do it in the gym though”) and the hooks are the type to inspire fist pumps from the Jersey Shore to Deutschland. The menacing chords and tenuous organs of “Opium” give way to the sub-pumping horns of “Hard Niggaz,” a track that needs little more explanation than its title provides:

“You motherfuckas got us mixed up (Wrong dudes)
Billy Danze, Fizzy Womack (Strong dudes)
Make a left, nigga strode back (Wrong move)
Fuck around and get your wig wrapped (Not cool)
It’s past ghetto where we live at (Blast)
Metal’s how we settle where we live at (St. Marxmen)
(We creepin’) We deep in the cut like infections
Hard like erections, faggot did you get that?
Y’all get back to gettin’ money
I like to see you niggas bubblin’
Y’all make it we’ll take it, the script never change
The big boy gang (Uh-huh) the big Cadillac
Muscle through the lane (Mmm-hmm) the nigga (Dumb)
We numb like Novocain
Homey these two can’t be tamed
So we ride on the darkside with legitimate rock
With legitimate ties to illegitimate guys”

“Rollin'” is the album’s standout, an uneasy funker with a ghoulish hook and sinister groove:

“This is my motherfuckin’ house, Mick Jagger in this bitch
Big magnum on my hip, open your mouth
(Vroom) Nigga there it is, next nigga rollin’ up
Bet we go’n fold ’em up, you controllin’ what?
This is my motherfuckin’ house, don’t leave swollen up
M.O.P. print on your face, G’s throw it up
Brownsville throw it up
I’m thinkin’ of tattin’ my city on my back
I’m committed to gettin’ back
In case you niggas don’t know what up
I’m the king of this hard shit
Though I’ve never been an artist I’m just dope as fuck
(What?) The credentials my hood gave me
Potential to rock nations further than Jay-Z
Play me if you want, watch a nigga come up short
Dog, you playin’ ball on the wrong court
This is bloodsport my nigga, ain’t no love lost
If I’m the nigga you cross, it’s just on
and of course I’ll be rollin’…”

“Sparta” is a murderer’s row of ten consecutive bangers – no filler, no frills, no bullshit. With enough gun-clapping for a Tarantino film and enough onomatopoeia for a year’s worth of Marvel comics, Fame and Danze deliver another jewel for 2011. Predictable? Eh, maybe. Consistent? Damn right.

M.O.P. is an American classic like apple pie and muscle cars – a combination so ingenious, timeless, and reliable that it never fails to entertain. Yet like any great tradition, a bit of subtle tinkering to keep the product fresh is always welcome so long as it doesn’t distort the approach, and by hooking up with Snowgoons, Fame and Danze prove that their concern for their art places them on hip hop’s cutting edge. Rap’s in a great place when hardcore street legends are willing to collaborate with acclaimed European producers, especially when they are of such a single mind that the result sounds like “Sparta.”