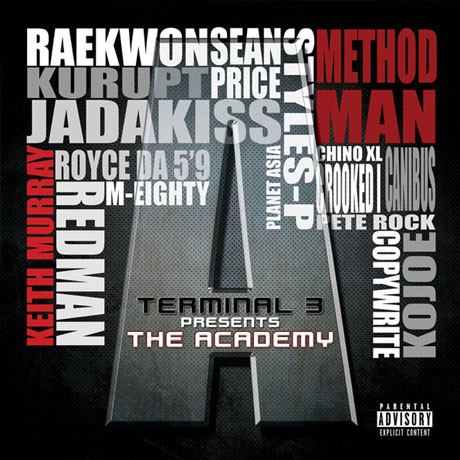 In July RR received a press release promoting The Academy, billed as a new compilation conceived and organized by Kurupt that would be “a bi-coastal merging of the minds that provides an undeniable unity” in the world of hip-hop. I dutifully posted this news, but given it’s one of 50-100 e-mails I get every day promoting singles albums or projects, I quickly forgot about The Academy. The only lingering evidence this album existed on my radar was an unopened zip file labelled “Kurupt exec produced” sitting in a folder full of potential albums to review. As I was compiling what to work on for this week’s update, that old press release came to mind and I double clicked the folder to find out what Kurupt came up with.

I think it’s safe to say “The Academy” turned out to be something of a pleasant surprise. This is quite a weighty project by any measure you like. 21 songs are a ton of tracks, and at over 75 minutes it’s got plenty of kilos for your ear as well. Kurupt didn’t pick out no-name rappers for this comp though, which means the rappers themselves are at least extra large if not XXL. The selection runs from popular mainstream emcees to hardcore underground favorites, often on the same track, such as Styles P rapping with Agallah and Canibus on the first full song “Mashout.” Terminal 3 Production produces the entire album, and on this joint he gives the song a very ‘Bis feel, the kind of punchy electronic sound he loves to drop hundreds of bars over. Agallah and P don’t seem non-plussed by it though – their contributions to the song blend with the beat perfectly.

Some of the collaborations on this album are what hardcore backpacker wet dreams are made of. Chino XL, Copywrite and Crooked I all on one song? The killer C’s collide on the scratch heavy track “Triple Seize.” The dirty and damn near stinking sound for “Code of Conduct” combines New York favorites Pacewon, El Da Sensei and Illa Ghee, though it may be the middle of those three who steals the show. Ever wanted to hear Keith Murray and Sean Price on a track together? The crunk piano keys of “Paperwork” have you covered, where Murray spits unforgettable bars:

“Yo, rappers think they’re a good look
And probably, can’t even balance a bank book
I spit Wes Craven chronicles
My speech amaze you like talkin animals
Shut your fuckin mouth you fat pigeon lookin nigga!
Keith Murray kill rappers, without no trigger
I’m knee deep in the paperwork, you don’t get figures
You just actin black – like a wigga!
You a bitch to the death
Why don’t you stop rappin and be Paris Hilton BFF
I’m a lyricist’s lyricist, gettin ahead of a mentalist
Conspiracy theorist-ist, when I’m spittin this”

There are some straight laugh out loud lines in his rhymes, including the verbal barb “you soft like erectile dysfunction,” and since Sean Price is a humorous and deadly artist in his own right they are well met here. Sean’s partner from Heltah Skeltah can also be heard on “The Academy,” as Rock gets down with Phillie and Ras Kass on the big booming joint “Still No.” Ras sounds more inspired than he has in a minute, bragging that he spits “infinity and beyond like Buzz Lightyear” on tracks while wearing Nike Airs spattered with the blood of his foes. Now there are some tracks on this compilation which do put the O into obscure. Out of the entire list of rappers on “Pick Your Vice,” the only name I even recognize is PackFM. We’ve reviewed precisely one Mudkids album on RR, and that’s the only reason I know who Rusty Redenbacher is on “Change the World.” Most songs try to find a balance between better known and lesser known artists though, such as Kurupt and Ruste Juxx flowing with Tri-State and Kevlaar 7 on “Kill Everything (Squad Up).”

There are certain collaborations on “The Academy” that stick out above and beyond the rest of the songs, even though Kurupt undoubtedly intended to imply that all of the selections here were of equal value. Nonetheless when Royce Da 5’9″, Bronze Nazareth, Sean Price and K-Solo are all flowing over the slow tempo and relentless driving beat of “Let’s Go,” it’s hard not to notice. By the same token the aggressive “Rock This” featuring Copywrite, Pete Rock and Planet Asia stands out, although even in 2011 there are elements of Pete Rock’s flow that suggest his best role is behind the boards – but given who he hangs with on the track he gets cut some slack. One of the album’s heaviest tracks might be “Rich Righteous Teachers.” I don’t think Wise Intelligent will appreciate the name but maybe he’d appreciate the lineup: Billy Danze, Jadakiss, La the Darkman and Sav Killz. It’s songs like these that make “Terminal 3 Presents The Academy” worth tracking down. It’s a big album to digest, and at times the combinations are mind boggling (not always in a good way) but truly interesting compilations are so rare in 2011 that a project like this really stands out.