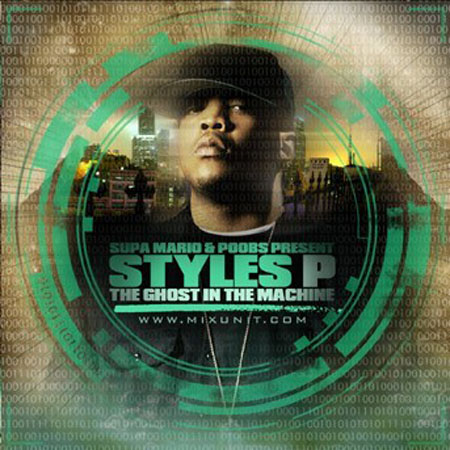 Styles P :: The Ghost in the Machine

Originally a mixtape you could only buy from mom & pop stores and underground websites, the Supa Mario hosted Styles P album “The Ghost in the Machine” has been making inroads at mainstream retail outlets. In fact I couldn’t have told you this wasn’t a regular full-length Styles P album until I took the shrinkwrap off and popped it in my CD player. Gem case, slick artwork, an obviously pressed and mastered disc, the whole nine yards are found here. This is in every respect an album, and yet it’s not. You won’t find Interscope’s stamp of approval on it, and in fact the increasingly widepsread release of this disc may be an indication Styles is fed up with them repeatedly pushing back his “Time is Money” CD.

Some have suggested that due to D-Block’s feud with G-Unit and 50 Cent’s influence at Interscope, it might never get released at all. To no one’s surprise D-Block has gone straight to the streets, a tactic that served them well when they were signed to Bad Boy as The LOX, where they were also jerked around and not pushed. While Jadakiss seems to be okay for the minute, Styles and Sheek Louch are putting out these mixtapes-which-are-not; and thanks to getting into stores they’re getting their message about 50 Cent out to the public. On “The Ghost in the Machine,” Styles is taking a lot of shots, some that are subtle and some that are anything but. For example the hard-thumping short track “Get Your Dream Smash” seems to be about fake gangsters in general, but one could infer that Styles is saying he has more street cred in New York than 50:

There’s nothing subtle about the “Snitching 101” skit though, a direct implication that 50 has been ratting out people he used to be in the drug game with. If there’s any doubt as to the point of including the skit, the song that immediately follows is titled “Pussy Niggas” and talks to G-Unit and Cent directly:

“Ma I’m ’bout to cut up this Yayo
Bring 50 to the Bank then Buck at these a-holes
But, I don’t wanna blam they clique
They don’t stand a chance and I’ma come cleaner like the dance to this shit
Dem niggaz aight, but yell Yayo to vamoose
Let me set you, check you, 50 don’t respect you
On the radio he said your baby mom was a Deuce
I was sittin on the bunk like ‘Damn he a punk’
Don’t make me off niggaz, y’all snitches is soft niggaz”

There are three things to keep in mind about “The Ghost in the Machine” before considering a purchase, particularly if you’re a long-standing fan of D-Block and/or Styles. Item #1 is the fact that since Supa Mario hosted this CD in its more conventional “street release” format, official copies still have the samples he punctuated the album with that are sampled from various Nintendo games. Some may find hearing “Mario?” or “MA-RI-OHHHH!” over and over again irritating, but it’s certainly no worse than the repeated cocking and firing of a gun by a certain OTHER mixtape DJ I won’t name. Secondly because this is a mixtape format, a lot of these “songs” are more accurately described as short freestyles under two minutes set to other people’s beats. In fact in a few cases such as “In My Hood” and “The MC” it’s blatantly obvious where Mario and Styles got their beats from, but to their credit they aren’t trying to hide it either. In fact in the latter Styles namechecks the originator and gives credit where it’s due:

“Kings lose crowns, teachers stay intelligent
That’s what KRS said
[…]
Touch me, lose two arms, nigga you might think you hot
You dead wrong, you just lukewarm nigga
I’m colder than the ice in the freezer
Butcher knife slice and you seize up
44 blunts, I got a right to amnesia
Late night I’m pipin a diva
All my niggaz hyper and eager
In case I miss the hit the sniper’ll leave ya
This case it’s better to give than be the receiver
In the M-6 blowin the weed up
Comin through the hood makin sure that it’s G’d up
I’ma I’ma hustler, you know that I read up
My rap is like coke, so my shit stay ki’d up”

Does P offer anything revolutionary on “The Ghost in the Machine?” Not really. He shows as much charisma as he did on “A Gangster and a Gentleman” though, and his raps seem to have gotten somewhat more clever and less cliche over time – Jada and Sheek are clearly rubbing off on him. While he’s still not the equal of either, it’s clear from this CD that the gap between the three has narrowed considerably in terms of their abilities. Depending on whether you get a retail version or the underground mix this album may be plus or minus a few tracks, such as a remix of the song “I’m Black” plus the one single from the unreleased “Time is Money” that has charted, “Believe It” with Akon. Either way the money is in fact fairly well spent on this album, because I didn’t feel like it was a waste of my time to listen to it. D-Block/LOX fans should be pleased and 50 should watch his back, because if he really is fucking with Styles release date he may be creating a movement which could come back to haunt him – pun definitely intended.