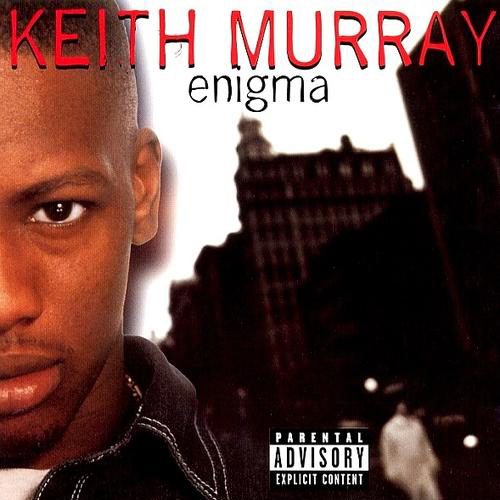 Among casual hip-hop fans, Keith Murray often gets lost in the shuffle of the mid-90’s New York hip-hop scene, stuck behind some of his more well-known collaborators such as Redman and EPMD. Those who are familiar with the Def Squad affiliate, though, know that Keith Murray has one of the most distinct and recognizable flows of the era, with his unrelenting, in-your-face delivery that grabs hold of the listener and makes it difficult to ignore his lyrical prowess. Although his 1994 debut “The Most Beautifullest Thing in This World” remains his most commercially successful work, perhaps his most slept on release is his sophomore album that dropped two years later. Indeed, “Enigma” seems to have slipped through the cracks on RapReviews, as well, and I felt it was appropriate to write a review and attempt to revive interest in this classic album.

It’s clear right off the bat that Keith Murray has something to prove on “Enigma,” as he wastes no time attacking anyone who disses him or threatens his crew on “Call My Name.” Over sinister piano keys, a hard-hitting drum loop, and a bassline that sends chills down the spine, Murray spits three menacing verses to match the gritty vibe of the beat, with lines such as “I think the devil’s in this beat, fuckin’ with my speech/ Makin’ me do his dirty work, makin’ niggas kill each other on the streets.” “Manifique (Original Rules)” has a more laid-back feel, with jazzy synths setting the mood, but Murray doesn’t stray far from his aggressive style of rhyming. In a similar vein, the easygoing trumpet sample from Marvin Gaye’s “What’s Going On” sets the stage for more of Murray’s wordplay on “Whut’s Happinin’,” as he raps “And don’t miss the crispiest nigga in the nucleus/ With futuristic linguistics/ Ballistics be twisted like physics.”

As the album progresses, it becomes more and more clear that the production is lacking when it comes to variety, as most songs closely follow the blueprint for mid-90s New York hip-hop, complete with boom-bap drums, deep basslines, and sampled piano keys, trumpets, and horns. The simplistic nature of the production, though, is by no means a negative, as it allows Murray’s always entertaining rhymes to be the focal point of the album. And despite the fact that the beats grow somewhat repetitive by the end, there are still a number of quality tracks worth mentioning, such as the head-bobbing, almost hypnotic “World Be Free,” with its punchy snare and rolling bassline. “What a Feeling” is one of the most complete instrumentals on the album, with soft jazzy pianos keys in the background and a perfectly orchestrated bassline that plods along the track. Perhaps the only beat that’s smoother is the album’s lead single, “The Rhyme,” which also happens to feature some of Murray’s most impressive rhyming on “Enigma.” The soft, gliding synths and heavy drums are the perfect backdrop for his ferocious flow, as he kicks the second verse:

Given his rather unique style and delivery, it’s difficult to grow tired of Keith Murray’s rhymes, but even so there are a handful of guest appearances throughout the album. Murray goes back and forth with Kel-Vicious on “Rhymin’ Wit’ Kel,” over what sounds somewhat like a slowed down version of the classic bassline from Eric B and Rakim’s “Paid in Full,” as the song has a more playful attitude than some of the other tracks. Then, there’s the upbeat posse cut “Yeah,” which is hard not to like given verses from Redman and the tongue-twisting Busta Rhymes. On the flip side, R&B vocalist Dave Hollister sings the chorus on “To My Mans,” one of the most contemplative and thought-provoking tracks on the album, as Murray reflects on the death of several close friends and family members. The struggle that comes with growing up in the streets is clearly reflected in his second verse, as he raps:

“Hey yo, close the blinds when you cooking
My neighbors be looking
My nerves is shooken so fuck it I’m off to Brooklyn
To my cousin with the devilish grin, devilish way of livin’
But fuck it, he’s still chillin’
Adrissa ‘Knockout’ Beuwright drunk 40’s all night
While I did the mic something right
Catching wreck or we was playing ball
Getting busy in any little hole in the wall y’all
Street soldiers with good heads on our shoulders
Wanted to go to school to be doctors and lawyers
Well I got caught up in the system with two ounces
Had to do a little time in the big houses
Before I even knew it I felt it
Ay yo, yo your cousin Knockout got murdered, what?
Damn, that was my man”

Obviously, Keith Murray isn’t for everyone, and those who favor more alternative hip-hop will most likely be put off by his aggressive style of rhyming. Any fan of golden age New York hip-hop, though, who is still sleeping on “Enigma” should immediately add the album to their collection, as it is arguably the best release from the Def Squad veteran. The energy and hunger he brings to the mic are hard to ignore, and his intricate wordplay and impressive vocabulary give his street-driven rhymes the depth needed to carry the entire album. And while you won’t find the most complex beats on “Enigma,” the production is a near perfect complement to Murray’s style of rhyming, and there are certainly enough catchy tracks to keep things from growing monotonous. Longtime fans are sure to agree — for listeners just discovering Keith Murray, “Enigma” is as good a starting point as any.