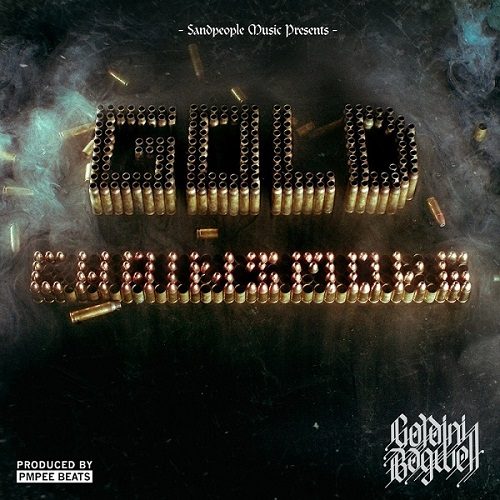 In one form or another the Sandpeople collective dates back to the mid-2000’s. In that time they’ve changed their line-up several times, and much like the Wu-Tang Clan they’ve Debaser, the combination of Sapient on beats and Ethic on rhymes, but as a whole it’s safe to say they’ve all been putting in work and releasing quality material.

Gold a/k/a Goldini Bagwell is the latest member of the crew to drop his own joint, and if the Wu-Tang Clan analogy means anything, that would probably make him Raekwon or Ghostface. If you tried to make them completely analogous chronologically, he’d be Cappadonna or Killah Priest, but neither of these definitions fit Bag well. I’m settling for Ghost, because Rae is well known for his slanguistics, and Goldini doesn’t seem to be out to reinvent the Urban Dictionary here. He’s more of a storyteller, the type of rapper who wants to draw you in to the topics he’s talking about, and that’s definitely the Ghostface Killah M.O. He’s also out for the betterment of hip-hop as a whole, opening “Let’s Grow” with the words “It’s that crabs in a barrel mentality that’s gonna get you PINCHED, homey.” Check out how he breaks it down:

“I can’t take you for a trip down memory lane
The film has more holes in it than a prisoner’s chain
I’ve been self-destructive, wore out the red button
So I’m +Good Will Hunting+ on a mission for CHANGE
(Here we go) But everything different’s the same
Moving at light speed, please don’t visit my LANE
I’m sure this chain smoke stuntin, killin brain cells by the hundreds
but in my reality I think I’m twistin the GAME
Now how can I lead by example?
[…]
It’s too easy, to focus on the negative things
But to rise above, requires more than regular wings
Even though, no idea’s original
We can still plant the seed with hope like LET’S GROW”

A backdrop of jazzy piano music keeps the presentation moving and prevents Bagwell from becoming didactic or preachy. This and the album’s other songs are produced entirely by Pmpee Beats out of Lahti, Finland. If that seems an unlikely collaboration given Gold is from Portland, Oregon then you really need to adjust your mindset for 2012 – this is the globally linked hip-hop world we live in now. In fact after listening to “Chainsmoke” I’m hoping more people link up with P.B. given he seems to have a classic approach to hip-hop production that recalls great hip-hop albums from the mid and late 1990’s. “Wmn vs. Wrk” works all the angles from samples, synths and scratching, creating a humorous hook even as it bangs to a lush and lovely beat. “Speed of Life” has eerie background harmonies that fade in and out over plucked notes and perfectly understated drums. “Words to Live By” featuring Sandpeople member Immaculate is yet another gem, as is the crooning melody and brushed snares of “For Nothing” with Reva Devito. Track after track is an auditory pleasure.

“Chainsmoke” may seem an odd metaphor for such a conscious artist, but what Goldini is attempting to imply is not that he’s a cancer on rap. Instead you should think of these songs as highly addictive, each one making you want to light up the next joint before the last one burns out. That would be easy to say, but I think in fairness Pmpee Beats has almost as much to do with that as Goldini himself, who can at times be a little dry vocally – without the beats to carry the rhymes he could possibly fall flat. The talent is definitely there though, and he’s got an intelligent message, so when put with the right producer the results are certainly above the average. Kudos to everybody involved in rolling up these songs from the Pacific Northwest all the way to Europe.