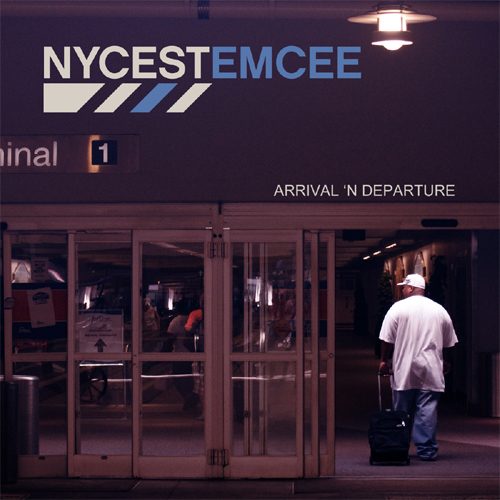 If you’ll forgive the momentary segue, I really wish artists would remember to put one-sheets in their promo packages. The one-sheet has everything you need to know about an artist and their album from biographical data to song production notes. As often as not it also includes quotes from other reviewers, a healthy smattering of hyperbole praising the artist, and suggested songs you should listen to when reviewing the album. Sometimes the extra shit you get with what you need can be overkill, but trust me as a reviewer when I tell you this – more than you need is preferable to NONE of what you need. The term one-sheet became ubiquitous because it’s so easy – just drop one folded up sheet in your mailing envelope and you’re done.

Nycest Emcee didn’t include a one-sheet with “Arrival ‘N Departure.” Instead the back cover of his CD jacket suggests that you search for him on Twitter and Facebook. That wasn’t very “nice” of him at all. I took his advice though and Googled his name hoping to find a bio. Reverb Nation was not helpful. They tell you who is featured on his new album (a fairly impressive list to be sure including Royce Da 5’9″ and Rah Digga) but nothing about Nyce himself. Facebook was only slightly more helfpul. I now know that Nyce hails from Raleigh, North Carolina – and not much else. What are his motives for rapping? Who has he toured with or opened for? Why is he so nice Biggie should throw down some ice? No answers to be found.

There’s only one other thing I can tell you about Nycest Emcee online and that’s courtesy of Amazon.com

– his album was released September 22nd. The rest of what I can learn about him and/or share with you the reader comes from his dust jacket. “All song produced by K Slack unless noted.” (Yes that’s how it was written – singular and not plural.) “Mixed and mastered by King James II for BP Entertainment LLC. Photography by Kathy Ceglowski.” Etc. So should you be interested in an artist you can’t learn anything about before listening to his album, even after he tells you to look him up online?

Fair or not, his song with Rah Digga is titled “We Don’t Care,” and if that’s true for Nycest Emcee that’s his own fault. It’s not because he’s a bad emcee. The North Carolina native isn’t anything exceptional that ranks him among the all-time greats as a newcomer, but he’s got decent breath control and diction and average punchlines. He actually showcases some of his wittier material on said Rah Digga track, so I’ll quote a little of it for you below.

“Digga Digga, with the Nycest Emcee-a
Put that on your Facebook status, go get your tweet up
Greatest collaboration since green ink and paper
The objective for the caper spittin holy water, praise y’all
Whores get Redbox’d, left out in the cold
Full of drama, just lookin for a dollar to hold
This just goes to show your flow is so PG
We R rated, Blu-Ray, 3D on your TV”

Like the artist himself, the production isn’t anything exceptional but doesn’t do anything to embarrass the artist either. The bassline and slight Caribbean feel of “Spread My Wings” certainly starts the album off well. The skatting and finger snaps of “Oh Baby” are also Nyce. The string section of “Damage Is Done” isn’t hip-hop’s best, but it gets the job done and pairs well with Alexis Jones’ crooning. There’s a quiet intensity to “That Hip Hop” and some effective Tupac Shakur samples, a fairly obvious but not hatable Sanford & Son sample on “I Am Nycest,” and “Danger” with Royce Da 5’9″ and K Slack may be the album’s Nycest track.

After 11 songs and 42 minutes though I’m no closer to understanding the man behind the Emcee. It’s as though someone scooped a rapper up with some modicum of talent, dropped him in a studio on a deserted island, waited six months until he came up with an album, then shipped him back where he came from. He arrived, he departed, and somewhere in the middle an album got made. I’m not offended by the time I spent listening to it, just the fact that we’re expected to give a damn without being given any reason to whatsoever. The moniker alone does him more harm than good. It’s certainly a clever name given that everyone knows that Biggie line, but it invites comparisons to hip-hop legends that he’s nowhere near to. He’s competent. Perhaps even above average. And if he’d remember to let us know something about him in the future beyond the fact he can flow to a beat, he might actually move up the rap ladder a notch or two.