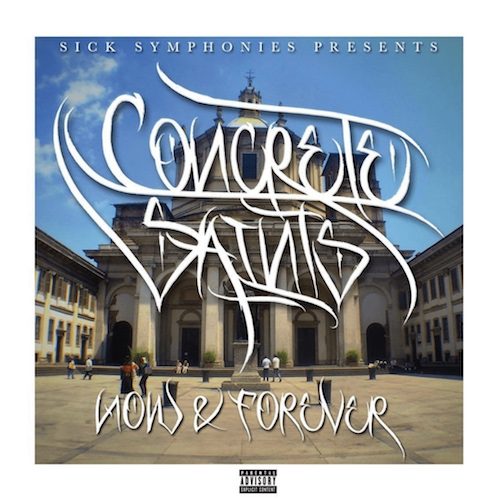 Who are the Concrete Saints? Well I’m glad you asked dear reader, I’ll give you the 411 and then some. They’re a Los Angeles hip-hop group affiliated with the Psycho Realm clique, first appearing on a Sick Jacken solo album back in 2010. Even though that would seem like a route straight to an album of their own, it’s taken six long years for the Saints to finally get their official debut out. Then again if you know anything about Realm’s history it’s not like s–t came easy for them either — they got an endorsement from B-Real then basically got f#@$@d over by music industry politics.

The good news for the Saints is that the old adage “better late than never” still applies. Bacardi Riam, Knosense and their producer St. Louis (of The Druglab) are here with “Now & Forever.” As you might expect given their friendship with Sick Jacken he makes two cameo appearances on this hour long album, showing up to rap on both “The Hustle” and “Rose Colored Glasses.” Here’s a taste of the latter.

That’s not the only cameos on “Now & Forever” though – they got Krondon to join in on “Benefits” and perennial underground hip-hop legend Ras Kass to rap on “Pray.” He says something I’ve been thinking about people who thank God after fights for a while.

“The Vatican, I’m mad again, I chose the dark side like Anakin
Life is bulls–t and shenanigans
Because even in sports, both teams pray
but one lose, one side win, but we all gotta play”

Perhaps it’s not a coincidence then that they have a single and video called “No Religion.”

Actually that might be misleading – I’m not saying they are atheistic but they’re definitely disillusioned by the poverty and violence they experienced in California. Even though that could lead to severe depression it instead leads to personal “Reflections” on the finale, set to a hard pounding drum beat and some background guitar licks. They sip Mo’, blow green and drink fifths trying to medicate their way through the pain, but rapping turns out to be the only real way to get it out.

Now I’m not here to tell you that the Concrete Saints offer some profound insights you’ve never heard before or some next level lyricism the likes of which hip-hop hasn’t seen in 2016. However in an era of hip-hop where so many “rappers” are actually SINGERS a straight up album of beats and rhymes is in itself worthy of applause, and one done well is worthy of recognition. The Saints may have waited six years to debut but they’re still off to a good start.