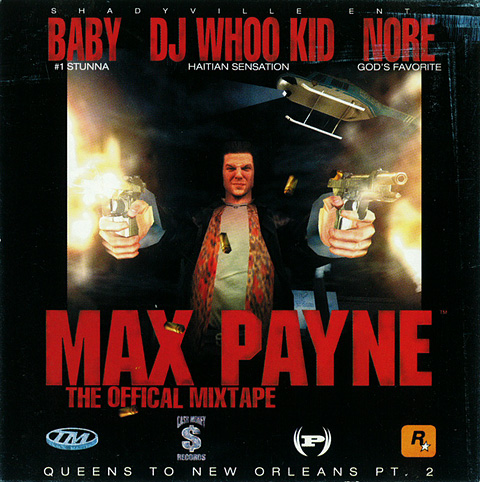 “This is the unidentifiable, badly smelling residue New York rap has boiled down to: grown men bragging about crimes they allegedly have committed, rappers threatening their opponents with physical violence. You might fool kids, but you ain’t impressing me with that type of behavior. What’s worse, you’re fucking up the game.” In a million years, I could never have said it better myself. If those words sound familiar, don’t worry. They were written by my man Matt Jost in his review of DJ Whoo Kid’s last mixtape, and to say that Matt’s prophetic words hit the nail on the head would be a huge understatement. N.Y. rap just IS NOT what it used to be. But y’all know that. Maybe Whoo Kid knows it too, because with Max Payne, he’s recruited some of our friends over at Ca$h Money to help him host his latest tape (CD or whatever) in an apparent attempt to capture some of the heat coming out of the South.

So does it work? Nah, not really. What we’re left with is basically Lil’ Wayne (Weezy Wee, yuh know) dropping unfortunate verses on remixes of “Grindin'” and “Oh Boy”, not to mention various other generic write-offs. Weezy also shows up alongside Baby/the Bird Man and Mannie Fresh between tracks in sad, overlong reminders that you’re listening to the “Max Muthafuckin’ Payne Mixtape, beeatch!” Just in case you forgot, y’understand. Other than that though, it’s all New York and a little bit of Philly and Detroit. What does that mean? That means appearances by (get your checklists ready, kids) Jay-Z and the whole entire ROC (Freeway, Bleek, Chris, Beans, etc.), the Lox, Nore, Foxy Brown, Clipse, 50 Cent, and plenty others. So what does THAT mean? That means the usual: a few nice cuts, and 70% filler bullshit. Gunplay? Check. Drugs? Check. Unbelievably explicit references to sex? Check. Aimless beef? Check. There’s plenty of gangsta to go round on this tape, so don’t sweat yourself.

The are a couple of good reasons to peep out Max Payne Pt. 2, though. At the top of that list would be the aforementioned “Grindin'” remix. You’ve no doubt heard it already. Sporting all-new verses from Malice and Pusha T, as well as Nore and Lil Wayne, 2002’s best rap track (that’s right, son) may not have gotten better, but at least it’s fresh again. Funny that the runaway best cut on this New York mixtape came from Virginia. A sign of things to come? Hmm.

Also kinda hot are Gilly Da Kid’s “Gilly Chill” (I am still lovin that Ad-Rock sample) and Shyne’s verse on “What You Know.” Worth mentioning also is Jigga’s Jaz-O dis, creatively named “Jaz-Ho.” Jay’s got the whole crew rapping over the “Guess Who’s Back” beat, and it works. Not as a single of course, but beefin’ shit like this is what mixtapes are for, dammit. But the very best reason to check out this mixtape would be to hear Nore’s commentary on some of his favorite videogames. Nore’s reviews of Max Payne and Grand Theft Auto are hilarious. Man, trust me, shit like that is priceless.

Still, the truth is that the bad outweighs the good here. There’s no two ways about that. Never mind about shit like “Stylin'” with Foxy, Nore, Loon and Gavin. The beat is nice, granted, but that’s it. I mean, I never though it’d happen, but Loon actually makes me miss the days when Mase was on Bad Boy’s roster. Equally unimpressive are 50 Cent’s “I’m a Soldier” (with production by Eminem), “Lick Shots” by the Lox, and Big Noyd’s “Maximum Payne.” Sadly, even Freeway comes across duller than ever on “Free.” But it’s okay. I’m still anxiously waiting for that Freeway album. Any day now, I’m sure.

Going from bad to just awful we’ve got the Trackmasters-produced “Shorty” from newcomer Exo. For a clearer view of what this track sounds like, imagine this: Ashanti and Mariah combined, but stripped of ANY sort of vocal talent. Then throw in Lil’ Kim’s uh, “charm” and a drunk-sounding man shouting “shorty!” over and over. That’s music to my ears, I don’t know bout y’all.

But goddamn man, Max Payne Pt. 2 delivers 73 minutes, 73 MILLION fuckin’ corny-ass gunshot sound FX (Matt covered that in his review also, to his credit) and 30 tracks. After a while, you’ll have to forgive me for thinking it all just starts to sound the same. Let’s hope something comes along to shake the East coast out of its stupor, because it’s getting ridiculous. This mixtape is proof that thuggin alone just can’t cut it anymore. What we need to see is more talent, or at least more variety, for things to get better. I understand that this is not a professional release, but damn, mixtapes are supposed to deliver hot shit straight to ya, no middleman. Overall though, that ain’t happening with Max Payne Pt. 2.