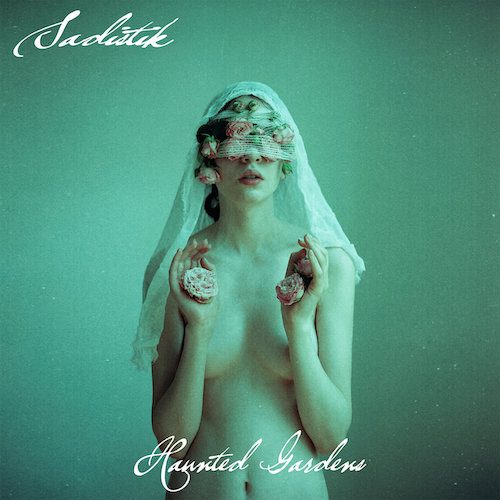 Someone once told me that there are people in this world that are so smart that they’re uncomfortable in it. As though the accretion of both emotional and sensory experiences are overwhelming for a single driven mind to handle. Seattle emcee Sadistik personally explores this notion with himself as the subject on his fifth album, “Haunted Gardens”. The title is oxymoronic, but the meaning is evident after multiple listens: The album is akin to lyrical diary entries, with each song representing a particular emotion from a troubled psyche. While this album is an excursion into a worried mind, it’s a different animal than his 2017 album “Altars“, in that it’s not angry and dark. In fact, there’s a certain elegance in Sadistik’s elegiac lyrics and the music that reflects it. Although that statement can be made of almost any of his albums, “Haunted Gardens” stands with a sharper contrast to Sadistik’s 2017 effort.

“All My Poisons Sit In Frames” is the introductory song and Sadistik lyrically conveys how he retreats into his own world when this world becomes too much for him. Laced by Shrimpnose, the production has something of a distorted music box type of feel to it. Another aspect of this album is that it deserves credit for putting on some relatively unknown beatmakers, some of them even had their hands producing several tracks on here. The Boston-based Vague003 held sway over two beats, one of which was for the album’s first single, “Eden”. The beat has layered synths which sound reversed throughout, but the way Sadistik slides his flow into a seemingly breathless one onto the track is amazing. He comes in with his customary alliterative rhyme schemes, wordplay, and imagery (especially in regards to flowers, plants, and gardens on this song) laced with dense poetics (try and imagine an amalgamation of Robert Frost and Charles Bukowski). But as to the song’s meaning, it could be about a failed relationship given the Virginia Woolf imagery in the accompanying video:

The album’s second single, “8 1/2”, was produced by former Blue Sky Black Death producer Televangel with an atmospheric electro-sonic stratum. The song is comprised of two verses and they feel like polar opposites to one another. The second verse is better than the first, especially when Sad Vicious switches his flow to spit rapid-fire tongue-twisting rhymes without fail. The video that was released for this track features him performing only the second verse. The song covers a relationship with the protagonist’s low-self image taking center stage. It kind of reminds of a scene from season two of the HBO series “True Detective” in which Rachel McAdams’ character told Colin Farrell’s Ray Velcoro that he’s not a bad man, with the latter simply responding, “Yes, I am”. New York-based beatsmith Foxwedding laces the beat for “Burning Lakes”. Foxwedding inserts ethereal vocals into the beat’s production while Sadistik adopts a flow reminiscent of the one he used for 2017’s “Salem Witches”. With comparisons to oysters hiding in their shells and a song title that’s a reference to perdition, it’s not that difficult to surmise why isolation seems like a viable solution to Sadistik at times.

With the mournful strings on “Daisies” courtesy of Bubbymane, it almost feels like a spiritual call-back to Sadistik’s 2010 EP “The Art of Dying“. The track “Man’s Best Friend” is also a song about mourning, but its piano keys, strings, and lush vocals give the eulogizing track its musical beauty. The song’s beat changes up by the time he gets to the second verse, thus becoming more up-tempo. The track “Alcoves” is interesting as it’s an instrumental interlude with no rapping. It’s pretty much a no-brainer for any fan listening to Sadistik to know that he wears his heart on his sleeve. He’s never been shy about emoting, especially his grief. The Vague003-produced “Koi” is a dedication for his deceased father. Though it’s not the first time he’s talked about it, I can only imagine how devastating the loss of a parent can be, and it remains more so for Sadistik considering how close he appeared to be with him. Even the seemingly small things have big impact as Sadistik raps:

“Your scent lingers like orange peels
It’s still your face when I see reflections
It cuts me open like koi gills
Underneath the mask is flammable like an oil field, still
I miss the sausage egg McMuffins
You got me on my birthday to watch my face adjustments
Father’s Days, holidays & functions
The days before I got afraid
Look, here’s another song for you”

For the most part, the album’s production has a heavy electro-synth influence to it, but there are two tracks on the album that can be considered “traditional sounding” compared to the more unconventional production. The VVitch-produced “Sistine Chapel” has a dope beat with its hi-hat driven drum patterns, reflective of the manic theme of longing in the lyrics. “Gallows Hill”, produced by Kodyak, is the least unconventional sounding beat on the album and is a nod to “Salem Witches” with its title. For many, “Haunted Gardens” is a therapy session in that they identify with Sadistik’s mind state. For this listener, I can identify to a certain extent. As an emcee, Sad Vicious experimented with his rapping ability quite a bit on this record, particularly in being able to adapt his flow to these productions. Also, while “Haunted Gardens” isn’t a quote-unquote “happy record”, it’s certainly not completely in the dark either.