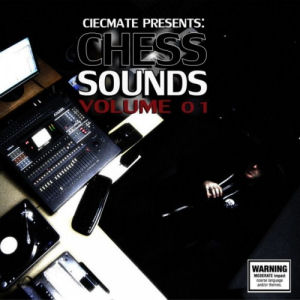 “But you know how that old saying goes right?
Beware of the devil that’s hidden in plain sight” – Newsense

Australian hip-hopperCiecmate has quietly been raising his profile as a full time producer and part time emcee over the past few years. With “Chess Sounds Volume 01” he’s attempting to raise it even further, procuring a selection of talented rappers from both Australia and North America, then providing the audio backdrop for all of them to showcase their skills. He wastes no time on the above quoted opener “Cause and Effect” featuringNewsense, a conspiracy theorist tale of state-sponsored terrorism and New World Order harrowing enough to please even Immortal Technique. “All aboard for the war on terror, waterboarding […] all in the name of the game of border protection.” Things are rugged right from the jump.

Ciecmate doesn’t let up on the throttle much over the next 16 tracks, but the line-up changes from song to song along with the sonic landscape that he procures. Brad Strut gets a rock’n’roll injection on “I Need Change,” Tame One gets cavernous booming beats for “Once Again It’s On,” and Kid Selzy gets a beat dirty and dusty enough for Killah Priest on “Trashem.” The one thing you could argue they all have in common is that these are not sunny, cheerful pop tunes. In some ways they’re a throwback to the 1990’s era of underground rap songs on independent record labels, where each emcee seemed pressed to outgrimey the hot single of the man or woman who came before. One can hardly be colored surprised when Termanology, Artisin and Gauge try to one-up the entire album to be the ruggedest of all on “The End of the World”:

“It’s fucked up, no love for a real cat
See where the shit is at, they pull them triggers back
It’s a wrap, snitches whacked, killers pack, shit is whack
D’s creep the town, your shorty’ll creep around
Young shorty he keep the pound, they lowered him to the ground
In this nightmare, don’t fight fair, we got them pipes here
Bullets ain’t nice here, take you out your Nike Airs
We sellin white here ’til we got them white hairs”

Some might argue that “Chess Sounds Volume 01” is just TOO bleak. Cynics would even say the Australian artists featured on the album are overcompensating in an attempt to get the same notice and recognition of their American counterparts. I’ve heard enough Aussie hip-hop over the years to argue differently, and would say the selection of artists like Maggot Mouf, Fluent Form and Tornts are actually par for the course on that rap scene – with the added benefit of Ciecmate’s beats backing them up. It may not be the kind of hip-hop music you dance to at the club or play in the background while you’re making love to a woman, but it’s the kind of hip-hop that keeps you nodding your head and paying attention to each bar said. While Australia tends to dominate the flavors, rappers like Little Vic and his song “Fly Him to God” keep the international breadth in full effect. Ciecmate’s “Chess Sounds Volume 01” is good enough you’ll want to check for “Volume 02.”