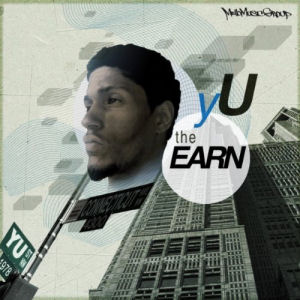 DC rapper yU (government name Michael Willingham Jr) first made his mark in 2009 as part of the Diamond District with Oddissee and XO. He released his first solo album in 2010, the excellent “Before Taxes.” He dropped his follow-up, “The Earn,” in the last weeks of 2011. As good as “Before Taxes” was, “The Earn” is an even stronger offering.

He calls himself the Humble King, and the tag fits. In both beats and rhymes, yU is subtle, understated, professional, and expert. He is a strong lyricist and rapper, peeling off complex lines effortlessly. He gives a masters class in how to write a rhyme on “First.”

“I look at it like its my first time
My first breath if air
My first glimpse at daylight, becomes a first stare
Folks thirsting for what’s found in my verses
I’m a merchant with the product
Pushing it like it’s my first sale
I’m building a foundation, wit the first nail
My first win, that’s the result of my first fail
Stories in first person, never 2nd or 3rd
You live & you earn, my first album was first concern
I was the first sperm to break through
Some get into this just to make the loot
but first you’ve got to pay your dues
A father for the first time, back in ’03
My first child, first smile in a while that I showed teeth
The first song that I was on, I did for no fee
low-key, nobody knows me style of an O.G.
The first street that I lived on was Porter Avenue
The rent’s due on the first, so I does what I have to do”

Song after song offers insights and reflections that you rarely see in pop music.YU manages to make these observations without seeming cheesy or preachy. “Blind” talks about how we don’t see the things in front of you; “I Believe” is about believing in yourself and something bigger than you; “Better Man” is about striving to be best you can be; “Delay” is about the need to slow down and not rush through life, with it’s chorus of:

“It seems like folks now want it right away
They need to slow it down, and ride the wave
To act out of haste, the price we pay
What’s destined’ll come, with slight delay.. slight delay
You do stupid shit when you move too a fast
Take a minute to think, and get your foot off the gas
Each and everyone wanna have some fun
You’re living under the sun, goals we got to get done”

Production is handled by yU along with 00Genesis, Kokayi, and Slimkat. For the most part it follows the Dilla template: snapping snares over chopped up vinyl. No one is breaking any new ground, but all 18 tracks are done well. They oscillate between uptempo bangers like “Fast Money” and “Even If” and slower, more contemplative tracks like “Time Machine.” YU gets some help on the mic with his Diamond District bandmates in “Delay,” and Duff on “I Believe.” Many of the tracks have sung hooks, which, along with the deep subject matter, creates a soulful vibe on the album.

YU is similar to artists like Q-Tip and the Roots who mix solid MCing, intricate rhymes, and musical beats to make hip-hop for grown ups. Hip-hop heads will be drawn to yU’s mic skills and the solid production. “The Earn” will also appeal to casual hip-hop fans who think the music lost it’s way when Tribe broke up. The album is soulful, accessible, and devoid of the ignorance and shallowness that are trademarks of mainstream hip-hop. It is an excellent album, and not to be slept on.