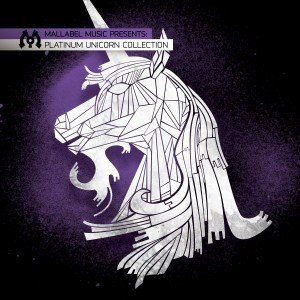 Mochipet. Skulltrane. Zombie-J. HD4000. These names lead one to believe “Platinum Unicorn Collection” is something other than a typical hip-hop album. Even though it’s dangerous to make assumptions based on nothing more than artwork and artist names, in this case those assumptions are entirely correct. Limited information can be gleaned from the official Mallabel Music website, which has tons of information on their artists, yet contains no “about Mallabel Music” page explaining who they are. Looking at one artist after another gives the same impression that looking at the album itself does – these are dubstep, neo-techno, futuristic musicians who believe in digital manipulation for audio excitation.

Another dangerous assumption made by many people is that dubstep != hip-hop. That is to some degree understandable if you hold the narrow view that if there’s not rappin’ or record scratchin’ it doesn’t belong in the genre. If on the other hand you remember that the roots of hip-hop’s musical side belong at least in part to Jamaican soundclash deejays, it’s not hard to see dubstep as at the very least a kindred spirit. Dubstep’s hallmark “warbling bass” fits that format – a loud and rhythmic sound intended to drive a crowd into a dancing fury. The difference of course is that there are by and large no “toasters” or emcees exhorting the crowd as well. Dubstep relies on big booming sound over hard-hitting beats, throwing in audio samples from pop culture or hip-hop as needed. At times it leaves one feeling like they just stuck their head inside a video game rave – and indeed if one was going to acid trip while having a Halo LAN party “Platinum Unicorn Collection” would be the perfect soundtrack.

Within that expansive definition, there are songs on “Platinum Unicorn Collection” that even the most ardent opponents of electronic music could easily identify as rap-related. The DZ remix of Dr. Knobz’ track “Purple Gangsta” sounds like a time trip back to the late 1980’s, with the same kind of drum machine sounds you’d hear on songs like Sir Mix-a-Lot’s “Posse on Broadway.” Helicopter Showdown’s “Get Tuff” certainly has the swagger its title implies, while reminding one of the electronic singing you’d hear on a Whodini track back in the day. El Diablo’s “Rolling With My Crew” even breaks into a rhyme from an unnamed female emcee – or at least I assume her name is not “The Devil”:

“Rollin’ with my crew and big bass bangin’
Pop that cork off, don’t leave me hangin’
Other players, they they be hatin’
But my shit is REAL!! … I ain’t playin’ this shit is REAL!!”

Even her slow flow sounds like a throwback to the halcyon days of 1980’s hip-hop, although nobody would have been spitting to something this electronically grimy and twisted. These songs at least prove that everything old can be new again, although when they come back they’ll be presented in a way no one could have imagined. If you’ve been listening to Bomb Hip-Hop and Ninja Tune albums over the years the kind of electronic soundscapes of tracks like Downlink’s “Deep Space” won’t throw you a curveball at all. On the other hand I could understand those who aren’t dance or house fans thinking Ceeker’s “Body Rocker (Zeno Remix)” isn’t their thing. That’s fine. I’m not out to convert non-dubstep listeners to liking the genre, but I imagine “Platinum Unicorn Collection” could do just that if you’re open-minded enough to check it out. To me this is exactly the kind of music a trendy Las Vegas nightclub would be playing while encouraging you to buy overpriced drinks. I mean that in the best possible way – sometimes, atmosphere is everything.