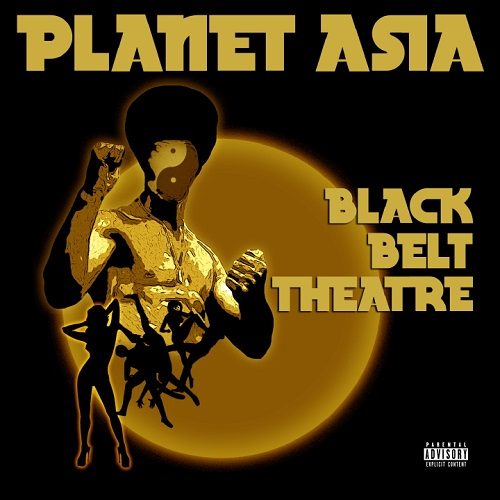 Indeed “Black Belt Theatre” is precisely as Planet Asia describes. Inspired by classic kung-fu and blaxploitation films, Asia’s latest album is a 20 track odyssey of thick, dusty soul loops served with a side of brash, intelligent gangsterism. As his ultimate goal for this album was to make it feel like a movie, Asia recruited a lengthy list of guest stars to fill the various “roles.” The guest list is as lengthy as it is diverse with Talib Kweli, Paul Wall, Raekwon, The Jacka, Mistah Fab, Ras Kass, Torae, and Fashawn being some of the names featured here. The result is an epic experience that is sure to please Planet Asia fans and gain him some new ones along the way.

As seems to be the recurring theme for many underground lyricists like Planet Asia, production has always been the one weak point in Asia’s catalog. Listeners were reminded of what Planet Asia can do over an album’s worth of dope production with “Pain Language” and “Black Belt Theatre” is just as solid musically. Of the big name producers on here, both Khrysis and Oh No deliver as promised. “Lost and Found” (produced by Khrysis) is a sweet, soulful mix of stuttering drums and vocal samples. “No Apologies” (produced by Oh No) is short, but hits hard with a mellow combination of chopped vocals and horns. “Stay Ready” finds Oh No pumping more energy into a similar formula of chopped vocals and instruments. Twiz The Beat Pro, who made a name for himself by producing MF Grimm’s last album, shows up for three beats. Dirty Diggs provides most of the beats on the album with 10 tracks contributed and does an excellent job of tying the album’s sound together with a varied, but consistent collection of sample based beats.

Lyrically, Planet Asia is in top form. Always the one to keep his ear to the street, Asia shows his versatility on tracks like “External Motives” where he exchanges street tales with The Jacka and Mitchy Slick:

“Pounds of the D, never would have guessed in a million years
Never turned up, I keep a bag of three
Fuck ringing my name, I’m out the way
Catch me in Paris with a couple notches swinging my chain
Swiss watches, my entourage all frosted
All bosses – mob niggas that never lost it
We got the torch lit
Dollars meaning much more sense
Cautious – the four fifth will leave your torso split – for yapping
I ain’t that nice guy that you vision
External motives of mayhem is how I’m living”

Not the one to alienate his long time fans who’ve grown to love Planet Asia for his deeper subject matter, the album also contains plenty of rewind moments. “Grown Folks Talkin” features Talib Kweli providing the hook and Planet Asia lacing the first and third verse:

“This is black belt
Jim Kelly in the Phantom
Afro shining from sheen
I spit fire to make the track melt
To make man, woman, and child bow
I’m proving every line – the king
Four finger ring, gold chain marine
Try to scheme and get blown to smithereens
Out of mind niggas swine like Jimmy Dean
And I’ll be damned if you play me like a jelly bean”

Planet Asia even finds a way to flip a familiar topic on “Furniture” as he addresses the ladies:

“Excuse me sugar, can I have a word with you
Let’s get away from here, I just want to swerve with you
Move some furniture, baby you can learn something
All you gotta do is look right in front of you”

There’s a little something for everyone on the album as Planet Asia mixes things up from track to track.

There is little to fault on “Black Belt Theatre.” It is a hefty serving of tracks, but given they are all quality and Planet Asia hasn’t dropped an album in four years this is one instance where the quantity of tracks is understandable. Though the tracks rarely stray from being either reflective street raps over soulful beats or boastful lyrics over aggressive beats, Asia switches up between the two with enough regularity to keep the tracks from blending into themselves. Overall, this ranks right up there with “Pain Language” as one of Planet Asia’s best albums and is one of the stronger albums to drop in 2011.