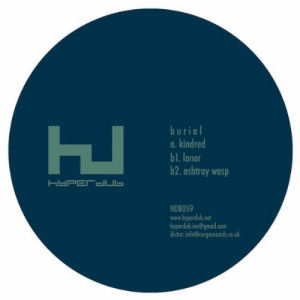 British dubstep producer Burial is a reclusive figure who is as mysterious as the music he makes. His identity was unknown until recently (Londoner William Bevan, if Wikipedia can be trusted), and the only information anyone had about him was the trail of singles and albums that he left behind. “Kindred” dropped unannounced earlier this year, adding another piece to the Burial puzzle.

One way to describe Burial is that he is the anti-Skrillex. Where Skrillex is loud, bombastic, and simple, Burial is subdued, intricate, and introverted. He is Shabazz Palaces to Skrillex’s Waka Flocka Flame. I don’t know how often he plays out, but I’m willing to bet that Burial doesn’t have 10,000 chemically enhanced kids jumping in unison at his shows, a common sight at a Skrillex set. Burial makes headphone music, the kind of stuff you listen to alone after a long night.

“Kindred” starts off with the cracks and pops of a record. A drumbeat starts in, playing the usual off-kilter dubstep beat. Burial then starts adding elements as deliberately and sparingly as a four-star chef creating his latest masterpiece. There’s a keyboard swell here, a pitch shift there, and finally the vocals come in. One of Burial’s trademarks are the filtered vocals that feature heavily in his songs. They are so processed that you can only make out some of the words, and they sound ghostly and haunted. The song has an 11-minute running time, but it never wears out its welcome. Burial continually adds and removes sonic elements, creating a compelling piece of music out of relatively few components. I’ve had this song on repeat for the past two weeks, and each time I get something new out of it.

The second track, “Loner,” immediately switches things up. It is more uptempo, has a shuffling beat, 90s keyboards, and a diva singing “Set me free.” It is one of the more danceable tracks he has done, but retains Burial’s sense of isolation and longing. The EP ends with “Ashtray Wasp.” It has a bouncing beat with the line “I used to belong” repeated over and over. The effect is house music made by a depressive. It also has an 11-minute running time, but doesn’t do enough to utilize it.

Dubstep gets a lot of hype these days, and Burial demonstrates what can be done with the genre. “Kindred” isn’t about making noise, moving asses, or channeling adolescent energy. It’s the sound of a composer showing just what can be done with a sampler in the right hands. Hip-hop producers should take notes.