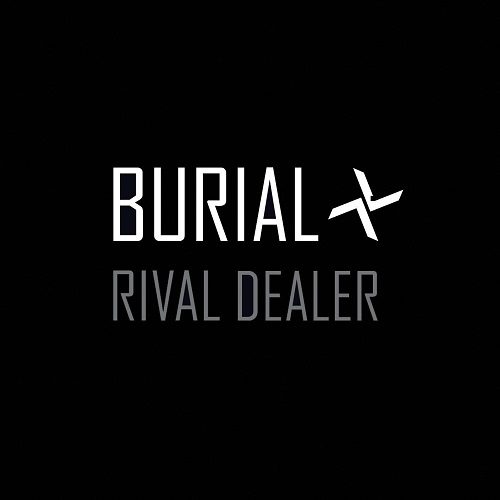 British producer Burial came on the scene in the mid-2000s, making dubstep that channeled urban loneliness. His critically acclaimed 2008 album “Untrue” combined dubstep’s shuffling beats and wobbling bass with filtered vocal samples that evoked a sense of yearning and romantic longing. It was the soundtrack for walking home alone from a club at 2am feeling disconnected from the rest of the world.

Burial hasn’t released an album since “Untrue,” but he has been busy putting out EPs. In 2012 he released “Kindred” and “Truant/Rough Sleeper.” On those EPs he experimented with longer running times and more complex arrangements. He also started moving away from the confines of dubstep, exploring 90s rave and abstract compositions.

“Rival Dealer” is yet another leap forward for Burial. He completely abandons any semblance of dubstep, replacing it with 90s-influenced techno and house. The title track has a driving beat that references the late-80s dance/R&B of Soul II Soul and C+C Music Factory. It is aggressive and confident, which is a change from Burial’s previous music. He samples Gavin DeGraw’s “More Than Anyone,” repeating the line “I’m going to love you more than anyone.” The completely changes at the five minute mark, becoming a haze of static bass while samples of “this is who I am” and Lord Finesse declaring “You know my motherfucking style!” play. Seven and a half minutes in, everything goes silent, replace by ambient synthesizers and sample of a woman talking about looking at the night sky.

“Hiders” is the shortest song on the EP, but still manages to switch moods and tempos in its four minute running time. It’s a song that conveys feelings of joy, empowerment, and overcoming obstacles, albeit in Burial’s own skewed way. A triumphant piano plays over heavily filtered vocals. An 80s synth drum beat finally kicks in at the 2:40 mark, and barely sticks around for a minute before the song devolves into ambient noise and silence. It’s a gorgeous, triumphant piece of music.

“Hiders” blurs into “Come Down To Us,” one of Burial’s most ambitious and explicit songs to date. Its 13 minutes are mostly built around a pretty synthesizer melody, again with heavily filtered vocals telling the listener “tonight you feel alive.” The song starts and stops several times, adding new elements. Like “Hiders,” the song feels joyful and empowering, the kind of song that might be playing in your head after you stand up to a bully, break up with a partner who was dragging you down, or come out to your family.

Burial makes the theme of coming out explicit by ending the song with part of director Lana Wachowski’s 2012 speech to the Human Rights Campaign about being transgender (Wachowski is probably best known for making the “Matrix” trilogy with her brother back when she was Larry and they were the Wachowski Brothers; Her speech about what it was like growing up transgender and why she decided to transition makes a powerful argument for trans rights http://youtu.be/crHHycz7T_c).

In a text to a British DJ, Burial explained “I wanted the tunes to be anti-bullying tunes that could maybe help someone to believe in themselves, to not be afraid, and to not give up, and to know that someone out there cares and is looking out for them.” That’s a lofty goal, and the EP largely succeeds. It is a moving piece, and transcends the confines of dance music. However, as good as “Rival Dealer” is, I personally hope that Burial starts to move away from these long-form epic tracks. He’s released six songs that are all over the 10-minute mark, and I think he’s taken the concept of a longer, more intricate track about as far as he can. There is a frustrating formlessness to Rival Dealer” and “Come Down to Us” that takes away from impact of those songs. Burial has been moving farther and farther away from the physical joys of dance music into a more cerebral space. This more cerebral music is interesting and challenging, but it is missing some of immediacy of his earlier work. “Hiders” hints at one direction Burial could go in: making dance music that could get asses moving but also give you something to think about. That isn’t to diminish “Rival Dealers;” but I do hope his next release sees him going shorter rather than longer.