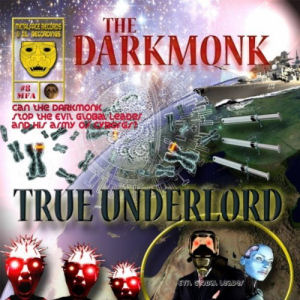 Adam Bernard: Let’s start this interview by talking about your mask. What is it made out of and what does it represent?

The Dark Monk: It’s gold and it’s just to cover my face.

AB: Have you ever tried to travel with it in carry-on luggage? I’m guessing security might not like that.

TDM: They usually don’t mind. I guess they don’t think I’m gonna put it on on the plane. They assume that maybe I bought it and it’s something I’m going to put on my wall, maybe.

AB: So the old woman with her knitting needles, she’s gotta let go of those, but keep the metal mask.

AB: When and how did you link up with DOOM’s Metal Face Akademy?

TDM: Metal Face Records, DOOM… that’s all part of Metal Face Akademy. That’s kind of where the mask fits in, too. It’s to cover the face. It’s to make sure you obscure the identity because the cameras are always watching. DOOM created Metal Face Akademy, it’s been several years now, maybe five years, and I was granted admission, that’s maybe the appropriate term. It’s long hours of study, practice, and then upon completion of your studies you’re able to direct certain energy into the world.

AB: It kind of sounds like pledging a fraternity without all the homo-erotic hazing.

AB: You mentioned the mystery and wearing the mask. Not a lot is known about who you are and where you’re from. I Googled you and did quite the extensive search. Why all the mystery?

TDM: You know, right now we’re talking about the arena of entertainment and music; remember when you used to like an artist and you had actually go find the record, or wait until the video came on, before you could discover what that person’s identity was? I remember they said some time back in the day Rakim did a set of shows before anyone even knew who he was, but maybe it was, maybe it wasn’t. Who knows? Kind of one of those things. It’s not necessarily something that’s new. Everything repeats itself.

AB: In the age of Facebook and Twitter and everyone telling everyone else every move they make, what do you think can be gained by under-sharing, rather than over-sharing?

TDM: I think you gain everything. We’re in an age where everything is ADD, everything is right now, and then you kind of chew it up and spit it out before you even know if it’s good for you or not. Let’s just figure out if it’s good. If it’s good, then keep eating, and then as time goes by you might understand it wasn’t just the fact that it’s organic, it’s the fact that it has certain vitamins in it, it was grown with certain principles. It’s like if you have good smoke or bad smoke, you know what that do.

AB: Moving to your music, you recently released an album, True Underlord. Tell everyone what it’s all about.

TDM: In terms of The Dark Monk, The Dark Monk comes into the story as kind of like the henchmen character, if you’re talking about the character in terms of who The Dark Monk represents. Therefore, I would say the Dark Monk is the truest of the underlords, a very pure hearted villain, always in deep meditation, but always ready to strike.

AB: There’s a political lilt to some of the content of this album. What issues are you most concerned about, or do you find most pressing?

TDM: I would say, to the politics, I really try to stay away from politics. Saying I try to keep everything on real life, and what fits into the natural order of things, is more applicable. Outside of the natural order of things, I don’t want to really deal with that. Some things are just right, some things are just wrong, and (I prefer to deal with) those particular universal principals as opposed to the politics. Politics change, and people change, and opinions can be bought, and votes can be cheated. Anyone in the United States, anyone anywhere, knows they be trickin the votes, trickin the machines, getting who they want to in there. The other day someone reminded me when George Bush got in the first time, how they kinda tricked it. Everyone had a consensus like they tricked, he got over on Al Gore, just regular politics, but they reminded me of the second time when it was John Kerry, and Bush got over again! That’s twice. He got over both times. Nothing happened. Is it wrong? Is it right? Do you have to be a politician? Do you have to deal with politics to understand is this bad, or is this BAD? No. {*laughs*} What’s wrong is wrong, what’s right is right, what’s bad is bad. That would be my answer. I don’t really deal with the politics, I just deal with what is right, what is wrong, and what is good, and try to stick to that, try to stay focused on that.

AB: What do you feel people focus on instead of that, that maybe overshadows the idea of what’s right is right, and what’s wrong is wrong?

TDM: I would say overall, everything. It’s like the plastic world that we live in. The consumer world, that’s really like a blessing and a curse, so what do you do? I don’t know. I don’t have the answer, but I’ll pose the question. I think the general disregard for common sense is really the biggest problem. Kind of like the herd mentality. (Lack of) common sense and the herd mentality, that’ll like destroy the world.

AB: Common sense has become a misnomer. It’s not that common.

TDM: It’s not. Common sense is like the most extraordinary genius possible.

AB: Moving back to your album, and the back of your album, in the back photograph you’re carrying a skateboard. Are you a skater?

TDM: I have a skateboard, but I’m not a skater. In the skater category, what that might mean to a reader, or an average person, no, not at all. Did I ride there on the skateboard that particular day? Yeah.

AB: So you use it as a mode of transportation.

TDM: I have and will. Amongst cars, busses, planes, boats, it depends on what’s appropriate at the time. Sometimes when you feel like you maybe are drinking too much beer and gotta get your blood circulating, especially with the mask, it’s a little heavy, too, so you have to make sure you breathe properly.

AB: Make sure that you breathe properly? Your performances must be crazy on you.

TDM: Health and fitness, the number one rule. After deep meditation and training, and making sure that you’re fit, and you have proper breathing techniques, it’s no problem, believe me.

AB: Take a minute to sell your album to our readership. Why should people pick up True Underlord?

TDM: It’s just a dope hip-hop record and that’s that. If you like hip-hop, and you like dope music, then that’s what it is. Besides that, everything else is subject to opinion. In this age of you can click it and listen, go take a quick listen. Obviously we have some ill beats and shit, but that’s that. Good, pure, hip-hop. None of the filler, none of the bullshit, and not ODing against any particular cause, or any particular reason. It’s just how hip-hop’s supposed to be, where it’s just you do you and if people think it’s dope then they gravitate to that, and that’s what it is.

TDM: Hmm. Good question. {*laughs*} Sometimes those are the questions that are the illest ones because it’s always a perspective of the day. Today I’ll say, I happen to be in Atlanta right now, and it’s like 77 degrees, so the pretty women, dark beer, and some good smoke.

AB: That sounds like a good day any day.

TDM: You have to add the sun, though. One of the key elements out of the four was the sun. The sun definitely adds to the mixture.