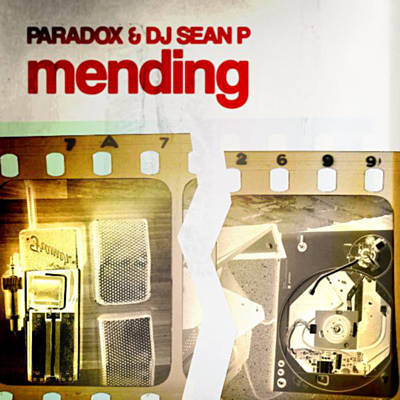 Until two weeks ago, my familiarity with Christian hip-hop was nearly nonexistent, having never even listened to an album all the way through. After reviewing CY’s “High Wire Act,” though, I found myself more open to exploring the subgenre, and when I received the submission of “Mending,” a collaborative effort between emcee Paradox and producer DJ Sean P, I was intrigued to hear another album in its entirety. And after doing some quick background research, it became clear that Paradox was not your average emcee, as the high-school teacher and father of two made his music in part to set an example for his kids and his students. I was interested, then, to see how his unique perspective would influence his music, as well as how much of a role his religion would play in his lyrics.

The first thing I noticed after checking out the track listing, though, was that there were a number of guest appearances to complement Paradox’s rhymes, with eight of the twelve tracks featuring other artists, as well. Going into “Mending,” I wondered whether this would give the album a disjointed feel, as it can sometimes be difficult for a single producer to try and tailor his production to accommodate the lyrical styles of so many emcees. What’s more, the opening track, “Paradox X DJ Sean P,” made me question both the production and the lyricism. Soulful trumpets and horns in the beginning of the song give way to a slightly irritating instrumental that grows harsher on the ears as it continues. At times, there is simply too much going on with the track, and as a result Paradox’s lyrics are difficult to fully comprehend.

Luckily, though, my initial impression of “Mending” would soon be disconfirmed, as “Paradox X DJ Sean P” proved to be an anomaly rather than the norm. Those who appreciate the sound of hip-hop’s golden age will recognize the influences in DJ Sean P’s style of production, which features the heavy use of samples that give the album a vibrant and authentic feel. His ability to stick to his roots while still providing enough variation to keep the beats sounding fresh throughout gives the album a cohesive feel, and the range of sounds he incorporates is truly impressive. “Man vs. Self” features a sparse drum loop, with a slow hi-hat and a simple kick and snare drum, along with perfectly placed grand piano keys and a crooning vocal sample, as Sean P scratches in lyrics from the likes of GZA and Kanye West, among others, for the chorus. “Go Outside” has more of an upbeat feel, with an uplifting flute accompanying orchestral strings that are reminiscent of those from Lupe Fiasco’s “Daydreamin’.” In a similar vein, “Forecast,” pits old-school drums atop what sounds like soft xylophone keys and crooning horns to create a flowing backdrop for Paradox’s rhymes. Finally, there’s “I Don’t Believe Them,” which sees Paradox speed up his delivery considerably to match the face-paced feel of the funky, Caribbean-style drums.

Of course, Paradox’s rhymes are no slouch either, and although his flow is sometimes overshadowed by the arguably more impressive production from Sean P, he still holds his own on a number of tracks. Although it’s among the shortest songs on the album, “Last Call” is still one of his more impressive displays of storytelling, as he chronicles the pitfalls of abusing alcohol over an instrumental that is admittedly a little too cheery given the subject matter. On “Here Lies,” one of the smoothest tracks on the album, he teams up with Relic and Griffin to spit about political and social issues ranging from government corruption to media propaganda to the mistreatment of veterans returning home from war, as he raps “Nothin’ is free, just ask the old man suffering/ Cause of preexisting conditions, the whole fam’s wondering/ What they’re gonna do when he’s gone, dang/ Here lies a man who fought for his country and his country just left him in harm’s way.”

Overall, save for a few stumbles, Paradox comes with thought provoking and often introspective lyrics to complement Sean P’s production, and the various guest appearances keep the lyricism from growing stale. The core of the album lies in tracks such as “He’ll Come Back,” “Bless Broken Shared,” and “Not Worthy,” which see Paradox openly express his strong faith and Catholic beliefs. For listeners such as myself who are not very religious, his prevalent discussion of his faith in most every song can be somewhat difficult to relate to, but true Christian hip-hop fans will certainly feel right at home with the subject matter. Religious or not, there are still a handful of quality beats than any hip-hop aficionado is sure to appreciate, as DJ Sean P’s production alone makes the album worth checking out. The bottom line, though, is that an appreciation for Christian hip-hop is necessary to truly connect with Paradox’s latest album.