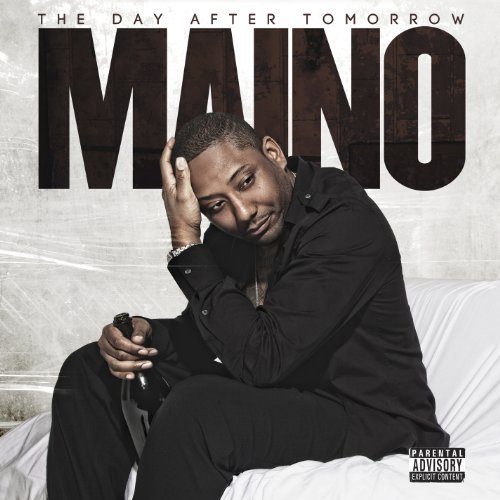 Maino :: The Day After Tomorrow

As far as backstories go in hip-hop, Jermaine Coleman’s past has to be one of the most fascinating. The Brooklyn-bred emcee, b/k/a Maino, represents the epitome of an underdog after spending 10 years behind bars, while later struggling as an independent rapper and eventually facing label troubles when he was signed to Universal Records. After going through so much drama, Maino’s hustle finally paid off with his 2009 Atlantic Records debut “If Tomorrow Comes…” and his single “All The Above” achieving platinum status. Three years later, he is back with his second studio album “The Day After Tomorrow” with hopes of continuing his improbable success, while trying to come to grips with his newfound fame.

Much like the Brooklyn native’s previous album, the narrative of “The Day After Tomorrow” is highly effective. Even though you may not like all 16 tracks on this album, every song flows in sync with the next one. From the “Intro,” Maino admits that although he is lucky to be successful, he still hasn’t found the true happiness he’s been seeking out of life. The following track “Never Gon’ Stop,” illustrates Maino’s consciousness as he is haunted that many of his comrades are dead or in jail, while feeling guilty about his lifestyle of excessive spending, partying, and womanizing. The melancholy, tinkling keys combined with melodic synths make this one of the best tracks on the album.

Aside from all the self-analysis, “Let it Fly” featuring the hook man du jour Roscoe Dash proves Maino can create a celebratory crossover record that will bang in the clubs and on radio. “Cream” featuring T.I. and Meek Mill is a good street record with a menacing synth-laced beat where Maino steps up his lyricism and flosses hard throughout the tune. Similar themed tracks like “Make That Money” and “Gangstas Ain’t Dead” featuring PUSH! Montana and Mouse fall flat as both feature underwhelming production and hooks, while the latter song has poor guest verses.

The turning point on the album comes at the end of “Nino Brown,” when a girl mentions to the Bed-Stuy emcee to not forget where he came from. The ensuing, chilling tune “Need a Way Out” featuring Mista Raja describes his highly dysfunctional childhood, which ultimately led him to become a criminal and land in jail as a teen. “Glad to Be Alive” is the standout track on the entire album and features bottom-heavy drums, atmospheric keys and buzzy synths. On this song, Maino finally discovers that family and surviving the hard times has made him successful:

“Glad to be breathin’, enjoying my freedom
Hugging my son, me telling him I need him
Looking in his eyes while I try to plan his future
Praying that he never does the things that I used to
He won’t be no dope boy, not a gun clapper
He won’t go to jail, he’ll be better than a rapper
Many tears lost on my home boys caskets
Fatherless sons in this world, young bastards
Holding on my champagne bottle as I think back, hustling
In and out of town, man I did that
Picture me sitting in the cell through the night
On the floor quietly sharpening my knife
Product of a violent neighborhood in the ghetto
Got above the street but it seems I can’t let go
Many different times that I could have been gone
But I got a chance to really live on”

“Day After Tomorrow” is another solid introspective track where the rapper apologizes for getting caught up in the high life and proclaims that he’s out to stack as much cash as possible, though he refuses to ever sell his soul. Unfortunately “Heaven for a G” is an unoriginal and uninspiring track where the Brooklyn emcee attempts to channel Tupac Shakur by asking whether thugs can pass through the pearly gates. As well, “Heart Stop” could have been a better track as it features a solid minimalist beat and concept, yet it is hindered by an aggravating chorus.

Aside from a few missteps, “The Day After Tomorrow” is another solid record from Maino. The duality of fame and fortune is explored in several clever ways as the rapper is able to bare his soul either through various pieces of dialogue or music. For the most part, the album shifts from low to high moments effectively as every song flows well into the next. Working with a set of top-notch producers on his next album would assist Maino in taking his rap career to another level as he continues to defy the odds.