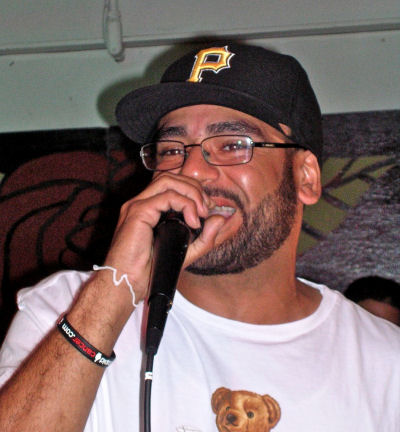 If you’ve ever heard the term “an emcee’s emcee,” then you have a little bit of an idea of the kind of artist Roc Doogie is. Originally hailing from Brooklyn, NY, but having resided in Connecticut since 1996, Roc is known for not just rocking crowds, but for having the other emcees who are on the bill with him become fans of his work, as well. As a member of Phenetiks, with deto-22 and The Protege, Roc has seen success with his team, as well as with his larger crew, the Ant Farm Affiliates. Now, with his first solo release, Roc Paper Scissors, the dynamic emcee is ready to be front and center on his own. This week RapReviews caught up with Roc Doogie to find out more about his solo album, how being a perfectionist became a hindrance to releasing it, and what he learned from Phenetiks being a part of the Rawkus 50.

Adam Bernard: Let’s start by talking about the album. How well do you think people will get to know you by listening to Roc Paper Scissors?

Roc Doogie: Hopefully they will get to know me pretty well. I’m a happy dude, so I like to have fun and I express that in all the songs. Regardless of what mood it might be in, you can get a feel for exactly who I am.

AB: Was there a specific vibe you were going for when you were putting this album together?

RD: Originally I was working on My Mom Thinks I’m Awesome, and that’s a more intimate piece. While writing that I needed some motivation, I needed a boost. I needed to get out of that for a second, and there was a certain sound I wanted to hear. Besides diggin through crates, and fishing through new and fresh music, I felt like “why not do it myself?” I took that direction with Roc Paper Scissors. I just went for it.

AB: When I hear you reference it, it’s a clean reference, there isn’t a curse word, so I could totally imagine them picking it up and scratching it into an intro or a commercial.

RD: That would be awesome.

AB: This is your first solo album after years of releasing music as a member of Phenetiks. How does it feel to have this one all on you?

RD: It feels good. It’s an accomplishment. I’m proud of it. Somebody told me you have your whole life to put your album out, but I figured, with what I was doing with the original project, I had taken a turn and I needed to get this out in order to complete that. So with this being the first piece, I’m extremely happy, extremely excited, extremely proud, and humble at the same time, so I have zero complaints.

AB: You’ve performed a lot as a solo artist. At any point did it get on your nerves that you didn’t have an album to sell to fans when they came up and asked how they could get your music?

RD: Yeah, it did. {*laughs*} I got tired of shooting off links. It became too much. “It’s comin, it’s comin, it’s comin.” As an emcee I just write. I focus on that aspect, the emcee aspect, and there’s a whole lotta shit that goes with putting out an album that I didn’t really know about it.

AB: What were some of the things you ran into that you didn’t really expect?

RD: Just the whole setup process. Even though once you get in the flow of it, it’s simple, it’s everything from obtaining barcodes, to making sure everything is in order as far as artwork and the smallest details, even down to the font. It’s just a whole bunch of shit that you really don’t pay attention to as an emcee. As a writer you just want to focus on the product itself, and I was kinda taken aback by it, so I had to reach out to people like Dirt E. Dutch and deto-22 that have been through it, that usually handle that side of the business, and they helped me out a lot, so I’m grateful for that.

AB: You are a bit of a perfectionist. How did that play into the time it took to release Roc Paper Scissors?

RD: Man, I would have to say the worst thing I did was start recording at home {*laughs*}, because when you have it right there you’re so critical of your own shit. I think that’s with everybody, but that delayed a few songs, that delayed some mixing. Even when it was done and it came down to the mastering of it, if one little thing was out of place, just from hearing it so much and knowing exactly what it was that I wanted and having full control over that, it was crazy.

AB: Would you be going to bed and at 2am be like “no, I need to change this tiny little thing” and get up and head back and change it?

RD: Yeah, and sometimes I would get up in the middle of the night, you know how sometimes you wake up in the middle of the night and you don’t expect it, and you’re up and you want something to drink, and you get a snack? I’d go upstairs and listen to something I did that night, not like it at three in the morning, and erase it, or say “damn I need to touch that up and fix it up,” and then I’d be up till five o’clock in the morning re-recording the whole song.

AB: How on earth did your family put up with you while you were making this album?

RD: Well, it’s just three of us, and it doesn’t happen all the time, plus I keep everything in the headphones and we try to schedule things like that, like giving myself one night a week where it was just that night to myself, no interruptions, no one home. That way I was able to bang things out. On top of that, when I’m on call with my job I can’t have any real commitments, so I have to get a sitter for my son in the evening, cuz his mom works in the evenings, so when I’m on call I don’t have him, so all I’m doing is writing, recording, touching up, pre-mixing, more writing, more recording, throughout that week. If my phone rings I go to work, and once I’m done I come right back to it.

AB: Going back in time a bit, Phenetiks was a member of the Rawkus 50 back in 2007. What did you take away from that experience?

RD: Do it yourself. No disrespect or nothing to nobody, it was just a one shot distribution thing where they exclusively had the rights to that project for one fiscal year. That means they were responsible for promoting it, advertising it, all that shit. I kind of felt that not everyone on the 50 got their fair share of that promotion and advertising and all that shit.

AB: Do you think it was just too tough with that large a roster?

RD: Yes. That was a HUGE effort on their part to take 50 independent, practically unheard, acts, and give them a deal to be able to put something out on their label, which at one time was the leading contender for underground hip-hop. That was like their comeback, and big ups to all of them, but I felt like they just overextended themselves.

AB: When I heard they were going with 50 artists I was like that’s a lot of acts.

RD: Yeah. It was a learning experience, and we enjoyed it, but all in all, what I took from that was do it yourself. It was a good thing for the exposure, and for the learning, but it was like yo, we could do this shit ourselves, we don’t need anybody for that.

AB: Is there another Phenetiks album in the works?

RD: We pretty much are building at the moment, and when I say building I mean literally building, like sheetrock and all that shit, but deto has been back at the boards and we’ve been throwing some things out there, we got a few joints done, not sure what we’re gonna do with them yet, but we’re always working on music, that never stops.

AB: Are you planning any out of state performances to promote Roc Paper Scissors?

AB: Finally, you used to wear a shirt that said “my mom thinks I’m awesome,” and that phrase is written on the inside of your album. Now that you have a solo release does she think you’re even more awesome?

RD: I like to think that as the days go by the hand on the awesome-ometer is going up. My mom, I just try to make her proud. I’m the oldest, so I have an example to set.