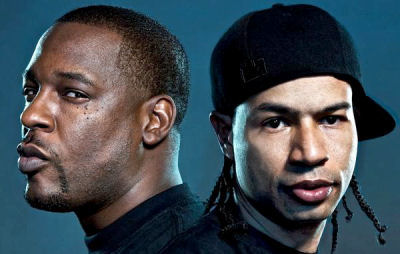 The Diggin in the Crates crew is one of hip-hop’s most respected, and legendary. After collaborating on the song “Weed & Drinks” on O.C.’s Bon Appetite, DITC members O.C. and A.G. felt a musical chemistry they wanted to explore further. The initial results of that exploration hit stores in November in the form ofOasis

, the first of what the duo says will be many O.C. and A.G. collaborative efforts. This week the two emcees sat down with us at RapReviews for a collaboration of a different kind; an interview, as both O.C. and A.G. opened up about their work, what’s been going on with DITC, and why they feel that sometimes the price of success isn’t worth the reward.

Adam Bernard: I know you’ve been working on something big, so tell me about the new album.
O.C.: We kept this a little under wraps. If you look at the title, Oasis

AB: Is there a dual meaning to it?
AG: If you ever look in a dictionary, an oasis is something that provides refuge, a relief, or a pleasant contrast. That’s what this album is, definitely, but we all have different explanations for it.
OC: You can take from it whatever you want. That’s where we left it at. As far as representing what we started to do with it, Oasis

is representing who we are and who other people are, too. We’re all in the same path, probably not the same road, but different paths lead to the same road. For example, a lot of people grow up in certain situations, no money, no food, no parents with good jobs, and you have to make your surroundings like an oasis. You might not have a million dollars, you might not come from a wealthy family, so you have to make do with what you got. That’s what I take away from it, keeping in mind that if we didn’t have a G.I. Joe doll when I was little I probably would have made me a G.I. Joe doll out of paper or something like that. There are so many meanings and layers to it, it can go on and on.

AB: What inspired this project?
AG: It started with an idea of doing a song about God and the devil. That’s how extreme we were and how deep we wanted our concepts to be, but for this first album we said we gotta take it a little bit lighter so people can get used to the group.

AB: What ended up happening with the song about God and the devil?
AG: We haven’t even recorded that song. That just shows that everything starts with a thought and an idea, and that was the original thought and idea. O had done a song called “The Crow” and he was so descriptive in it. When I listened to that song I was like “I gotta do a whole project with this dude.” He got so descriptive within the song that I knew we could max out if we did about God and the devil, but I don’t think that either one of us wanted to represent the devil and I think that’s why that song didn’t come out.

AB: C’mon, that’s what Auto-Tune and vocorders are for. Nobody would have known it was you.
AG: {*laughs*} Nah, I could never do that. I would die in my heart.

“It’s a blessing for me. It keeps me going. We ain’t never broke up.”

AB: I find it really interesting that even though you’ve worked together so long as a crew it sounds like you can still surprise each other.
AG: Yeah. It’s not surprised thinking that they’re not that dope, it’s just surprised like damn, that’s some shit I woulda did, and to be around some dudes for over ten years we’re still thinking the same… yeah, that definitely opens my eyes.
OC: It’s a blessing for me, man. It keeps me going. We ain’t never broke up. We ain’t never went through the traditional thing of having financial crazy blown out of proportion success and then everybody getting on their brand new shit.
AG: {*laughter*}
OC: It happens, man. Groups get so much money and fame and fortune and then it kinda ruins their family thing. We always stayed grounded with each other.
AG: I want to make sure this is said in the interview, man. I really love this nigga O.C. We came from Chicago yesterday and after the show we came back to the hotel, maybe two o’clock in the morning, and me and this dude were just talkin till four or five in the morning about life, about fun, nothing about music, just about us, his life, my life, our friends, our enemies, and this is a nigga I see everyday! Especially with the album coming out, we’re doing everything together, but yet three in the morning after a show we’re sitting down talking for a couple hours. It’s a real bond here and that’s why there’s going to be a saga with this O.G. and A.G. shit. We are a group and we plan on doing album after album after album, like on some Rae and Ghost shit. At this point I think it takes both of us. DITC is so big, one person can’t bring it to the forefront and keep carrying it.
OC: Not at all.
AG: It’s gonna take both of us to carry this. My shoulders aren’t that big to carry this alone and neither are his, but being the forefront rappers and the flag holders of this… just check this interview a year and a half from now and you’ll be like damn, these dudes were serious. Everybody in Diggin is back on their shit. We’re not quite ready for the Diggin album yet, but when I vibed with Diamond D his passion is there, he’s kickin freestyles to me over the phone, he’s about to be ready. So we gotta do our part and keep it afloat until everybody is ready to rock on the same page. I think that’s really gonna be the defining moment like damn, they were great already, they were legendary already, but no one ever did that before. I think we’re gonna be able to do that.

AB: I remember I was writing for Elemental back when we did the whole bunch of DITC covers.
AG: Elemental always showed us love. When they had Finesse on the cover, that’s dope shit, that’s real hip-hop to me. If a magazine can put Lord Finesse on the cover then they know what time it is and they know their history. Any outlet that’s representing that real hip-hop, me and O.C. support that. We’ll go out of our way to make sure whatever they need to keep going, doing what they’re thing is, that we play a part in that. A lot of people are on their solo individual shit and that shit just can’t get uplifted that way. We gotta come together.

“A(G) gotta keep me on top of that whole internet thing.”

AB: With so many outlets closing down, and with the internet being so vast, how do you go about finding where you want to be now?
OC: That’s a weird thing in my mind. A(G) gotta keep me on top of that whole internet thing because I really really try to stay away from it.
AG: {*laughs*}
OC: A(G) is the one that’s always like “yo O, it’s not that you gotta be a part of what everybody else is doing, but you gotta make sure you peep out and do your research on this shit, man, because you gotta stay up to date with certain things.” I listen to what he says sometimes. I do my homework and I do my research on it. You gotta get in the mix, but you gotta get in the mix in a way that you feel comfortable.
AG: At the end of the day, when you come home and close that door and you’re by yourself, if you’re not likin the shit you’re doing, then it ain’t supposed to be done. You can’t dangle some shit in front of nobody in Diggin and expect us to jump and respond. We care more about our integrity and our music than that, so if O sees some shit on the internet like “yo A, it just don’t feel right,” I totally respect that because I, honestly, on some days, don’t know if the internet is good or bad, to tell you the truth. When you’re trying to reach out to some people and do some things, yeah, it’s good because I can vibe with a nigga in China in five seconds, but at the end of the day I’m like, this is other shit killing my music. Some days you have mixed emotions and like O said, not everything is for everybody, but we definitely try to stay on point. At the end of the day, though, if you don’t feel good about doing something then you’ve lost the reward, you’ve lost the fight before its even started, so we try to make sure that anything we do is really representin us. You won’t really see us do too much shit that we don’t feel personally. I’ma be honest, I’m all on that internet shit, but none of that shit is me. That’s my peoples, an extension of myself, on Twitter and all of that other shit. I don’t have the enthusiasm for that. I have enthusiasm to write some muthafuckin rhymes and listen to some beats, throw on somebody’s dope album. That’s where my passion lies. And another thing, I hate when shit gets over-saturated, and it ain’t your fault and it ain’t mine, but in any interview you know what’s gonna come up – what’s your Twitter, what’s your MySpace, what’s your email; that’s gonna come up because that’s the norm right now. We’re the type of dudes that try to stay away from the norm, and sometimes that’s held us back. We could have definitely been much more successful, but sometimes that success might mean sacrificing your integrity, or your trueness to yourself, or your niggas. That’s too high of a price for me.

AB: As you said, there’s the happiness factor.
AG: Hell yeah. I listened to Get Dirty Radio the other day. I made that shit like four years ago, man, and I get chills when I listen to it because I feel the same way now.

AB: Since I opened with a totally ridiculous question about television, I’m going to close with a totally ridiculous question about television. O.C., are you mad that a nighttime soap opera used your name and you didn’t even get a role?
AG: {*laughs*}
OC: The O.C.? That’s crazy! You know, there was an O.C. before me, so you gotta ask him that. O.C. Rodriguez, from O.C. and Krazy Eddie. You gotta ask him if he’s mad at me using his O.C. But he was DJing and I’m an emcee, so those are two different things.
AG: We’re gonna have to holler at Sesame Street and The O.C.!