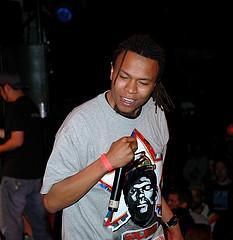 As a city Chicago has officially become a launching pad for Hip-Hop artists. From Twista to Common to Kanye the home of the deep dish pizza has been serving up artists the masses have been embracing for years now. One emcee who’s been calling Chicago his home since the early 90’s is Pugslee Atomz. Fans who go way back might remember him from the Nacrobats, a group that also included Psalm One. Others may know Pugs’ work from his solo albums, Thanks For Not Rhyming, 24 Years Later and Playing With Matches. Not content with just recording music, for the past seven years Pugs has also be been a presence as a radio personality on the University of Chicago’s WHPK-FM. Ludacris made the jump from his gig in radio to being a full time MC, and with Pugs’ latest effort, Conversations With a Chamelion, which is due out August 28th, many in Chi-town are thinking one of their favorite sons could do the same. This week RapReviews caught up with Pugslee Atomz to find out how the growing fame of his city has been changing the scene, why he spelled his album title the way he did, and what are the chances we’ll get to hear him over a sample of MC Hammer’s version of The Addams Family theme.

Adam Bernard: Being from Chicago is it easier or harder to get shine now that Kanye West, Common and Twista have blown up? How has the scene changed and how has that change affected the artists in the city?
Pugslee Atomz: I feel It’s easier in the sense of people want to know more about our city, or want to check out the similar artists to those you mentioned. The grind is a little harder in the sense that everybody is a rapper or producer with a CD or group now, but I think it’s definitely given us the chance to have more of an opportunity. I guess we will see as time progresses.

AB: What do you feel makes you different from the other artists from the Windy City?
PA: I’m different because I’m Pugs! No, seriously though, I have always been true to myself and consistently growing as an artist. I’m involved in graffiti, fine art, video editing, hosting battles, hosting a TV and radio show, fashion design, teaching classes in graf and MCing, and all types of promo work and all of these things help me to be well rounded in terms of music, which in turn helps me to attack it from a lot of different perspectives. But most importantly I realize I can never be more than an artist.

AB: You have an album coming out on August 28th called Conversations With a Chamelion. Talk to me about the album and why you decided on that particular spelling for Chamelion, when it should really be Chameleon?
PA: Blame Hip-Hop for the spelling. Ha ha! I spelled Chamelion this way to separate it and make it my own. I’m a Leo (Lion) and Chameleon X Lion = my new album on Gravel Records.

AB: You explained the Leo portion of the name, but in what ways do you feel you’re a chameleon?
PA: I stick out, but blend in. From experience when people can’t see you coming you tend to catch them by surprise in the end.

AB: With a name like Pugslee Atmoz when can listeners expect a remix of The Addams Family theme, or better yet, the MC Hammer version of it?
PA: Well, real talk, I couldn’t clear Hammer for my album, but on my first solo record, Thanks For Not Rhyming, in 2000 on Galapagos4, Panic of The Molemen flipped the sample for me and I did a joint called “True Lies.”

AB: Awesome. So when worldwide fame hits what’s the first thing you’ll do?
PA: Thank the Most High, invest for my family, start a multimedia company, fill my closets some more, and hire a pizza chef.

AB: Finally, I have to ask, Cubs or White Sox?
PA: I’m a Southsider, so I got to run with the Sox. You know they got a few trophies.