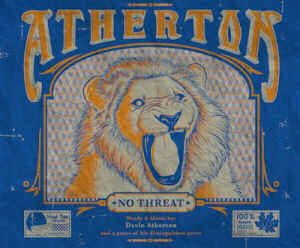 Four years ago when I first met Atherton, I knew less than I would have liked to about him, even though I’m a self-confessed fan of most things Canadian ranging from hockey to hip-hop. To be fair though it seems to be one of my foibles to be a “grass is greener on the other side” kind of guy, as I’ve long believed that Japanese animation is more intriguing than its American counterpart, and if you gave me a choice between a German beer and one from here there’s a good chance I’d take the former first. The older I get the more I recognize this is a fairly common human failing – the desire to seek out that which is different from what we know, what we are, what we’re accustomed to in daily life. It’s easy to overrate something than what you know as better, just because the sheer difference is itself enjoyable. It’s only through experience that you learn to appreciate the subtle differences. There’s thousands of hours of anime out there, but some are clearly better to watch than others. There are hundreds of German beers, but some clearly exceed others in the quality of flavor or alcoholic potency when consumed.

In that same fashion I’ve come to appreciate that although Atherton can be defined as “a Canadian rapper,” that there’s an incredibly deep and wide variation in what a rapper from Canada can be. A first time listener might simply be impressed that dopeness springs forth from his beats and rhymes, but upon deeper inspection and comparing him to his peers, it’s clear that he’s something special. If Canadian hip-hop is Oettinger, then Atherton is Paulaner. If Canadian hip-hop is Speed Racer, then Atherton is Chobits. It’s not just enough that Atherton dares to be different than what you know, it’s that among what’s different he is EXCEPTIONAL. He’s from the same rare breed as D-Sisive, a Canadian rapper who may culturally reflect the place that he’s from, but whose artistic choices speak to a much larger human condition. The title “No Threat” is an intentional middle finger to a world filled with hip-hop stereotypes, and the humorous song finds the protagonist exposing himself as a fraud.

“I tamed that lion for all to see
They clapped and cheered ‘Oh revere me!’
‘What courage!’ they’d say on their feet all applauding
But behind the scenes the beast had false teeth
Hip dysplasia, and two bum knees
A tad bit more fierce than the house cat breed
The gig was too sweet to give up foor simple truth
I was three ring circus headlining Babe Ruth
Young men were moved, inspired by my bravery
And young women swooned when I glanced at ’em aimlessly
Place no blame on me for puttin on a show
Taking nothing from nobody no threat – oh
I’ll stick with the fiction ride it out ’til the death
Place my head in his jaws and only fear bad breath
Knowing clear in my head it’s all a white lie
How could it be be wrong when it feels so right?”

The song also flips the script on the truth, claiming that cigarettes don’t cause cancer and “this economy’s flawless, everybody’s getting richer.” The technique of saying the opposite of what’s true might seem obvious at first, but in a world of rap albums which brag about excessive conspicuous consumption of material goods, it’s an actual threat to the status quo to suggest that everything you see is built on a lie – and telling you that what you can’t believe what you see could put a lot of rappers who are nothing more than the Bentley they drive out of business. Atherton’s ability to provoke thought doesn’t come at the expense of delivery – the flow and diction are crystalline and the music is easy to enjoy. Even though he relishes the ironic twist, the sentiments Atherton spits on “Paul Simon Songs” are surprising and daringly sincere:

“Sound of silence took on the tone of noise
On the Earth’s surface where they birthed, girls and boys
Little pearls of joy, a bundle of lovely
Sometimes I cannot see the beauty right in front of me
I don’t wanna be another apathetic asshole
Noose on neck, losing grip, Lucifer’s lasso
Last hope coincides with my last laugh
Knowing that I’ll get happy before my last lap
[â€¦]
All I wanna do is live my life
Make music eat good find a wife
All I wanna do is sing along
to each and every single Paul Simon song”

Throughout the album interludes are narrated by Atherton’s Uncle Bob, who sounds like your grandfather’s grandfather, with a twinkle in his eye from having found poetry to be the answer AND the question to life. He either belongs on the mic at the coffeehouse down the street, a PBS special about the last of a beat generation hanging on long enough to grab a new audience, or both. Production is dope throughout, and almost entirely Atherton’s own, although Fresh Kils gets some incredibly cripsy drums for Atherton’s autobiographical “Kid on the Corner” while Uncle Fester cuts up the wax. His self-reliance makes the album all the more bold and flavorful, because he’s pouring his all into it and leaving nothing out. Even when it’s bitter like “Miserable December,” it’s still refreshingy honest.

“Roller coaster never passed inspection
Keeps rolling over rusted track sections
Massive pressure – elephant on a thimble
Bones do break when made so nimble
Simple – stuck in her sadness
And I was in love with her lack of fantastic
Classic case of a devil and an angel
Obsessive reflections of each others opposing angles
Mangled tangled dementia’s apprentice
Never broke my heart but boy did she ever bend it
And it mended to my skin with an unbearable weight
So this lopsided style is how I walk today!”

I’m going to find myself humming the chorus to “Miserable December” all summer long, and if you buy Atherton’s “No Threat” you will too. There’s only one song with guest rappers, they being PBrain and Patience on “Hate Her Face,” but that’s fine because Atherton is more than capable of handling the 33 minutes of this album on his own with a little help from his friends to cut the wax or sing on the hooks, as Whitney Delion does on “Good Gone.” In fact to end this review, we’re going to quote from that song, because the darkness of it is a defining moment for whether or not Atherton is your cup of brew or Vampire Hunter D. He might be too honest or too raw for some, but if you’re of a mind to appreciate something extra special, his truth is quite addicting.

“I’m thinking, who killed the 60’s? Now it’s all Disney
Pre-packaged plastic wrap on anything uplifting
There’s an, air of fraudulent in each and every argument
that negates deviant ways and puts pride in honest men
nonsense when you got love but can’t show it
cause the skepticism in ’em looks for ulterior motives
Showing anything other than the depth of my depression
I begin to question my own artistic direction
Each sentence this is my attempt at prevention
of pigeonholing these flows for what they can and can not mention
For that matter sound like, be it synth, sample or soundbite
give a fuck about the method if in the end I’ve found light
It’s downright completely most truancy I’ve ever had
Put it on my mother’s yet to be engraved epitaph
You better laugh now while there’s still wind in you
If you can’t say it with style no one cares what you’ve been through
I’m into and all about those prolific writers
No one there to tuck me in, I still got them to say goodnight to”