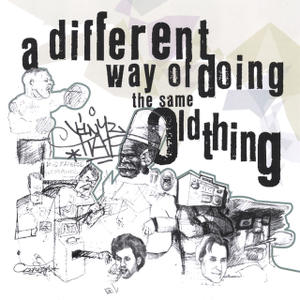 This is one of three discs I got free at Sunday night’s Ice Bears Tour in Omaha. This one happened because I struck up a cordial conversation with the rapper himself, as we were both chilling at the club long before the show even got underway. All I knew about Atherton going into the evening was that he was replacing Edreys on the tour, which I admit being mildly frustrated about given Jesal Padania had written a glowing review of his last release. To his credit Atherton was not sweating being a substitute, was happy to discuss his experience coming up in Canada’s underground rap scene, and showed the kind of polish that a five year veteran of the game should have even in front of a difficult crowd (read the concert review for more on that tip). He gave away “A Different Way of Doing the Same Old Thing” to anybody who could name the video game sample in a song; needless to say being the nerd I am I got that it was “Mike Tyson’s Punchout” right away. Somebody else had the same guess behind me though so I politely passed it off to the next man, but Atherton was kind enough to give me another copy on the strength. I promised him I’d review the album this week in return.

While Atherton is the lyrical maestro of this CD, he and Sire are generally interchangeable on this album’s production. It’s not surprising that an Ottawa born and Toronto based MC would learn to be self-sufficient in crafting dope beats – something that should be familiar to fans of Dan-e-o and other similarly situated artists. That rugged self-reliance is one of the reasons Canada’s hip-hop scene shocks the know-nots hearing it for the first time, and anyone hearing the smooth drum tap and piano rap of “Everything” would feel the same way. Lyrically Atherton is a little bit Slug and a little bit Saukrates rolled into one – proud of his roots but also looking to reach beyond them to achieve more:

“Everything is here, six years of our lifes
From bum tracks and weak sessions we work the gears ’til it’s right
From rough draft to re-edit to what you’re hearin tonight
I love rap! This expression did not appear overnight
Ottawa light, a whole scene yearnin to prove
there’s more to this than burnin spliffs and determine some booze
The chorus hits and nervous kids work into the groove
We’re forming grids where torment has been a permanent truth
Running with kids who don’t take the time to furnish their roof
We’ll decorate the cityscapes, spraypaint burners in blue
I turn on the news, speak Olde English etiquette
Sire connects wires and shapes soundwave measurements
Treasure this like you’re the guy who finally figured it out
Ottawa’s dope and dedicated without a flicker of doubt”

And so is Atherton. “A Different Way of Doing the Same Old Thing” is deceptively volumnious at first with 18 tracks, but Atherton & Sire subscribe to the old GZA “half short and twice strong” philosophy and provide short gems with a harder dose of dopeness. Many of their songs tend to be under three minutes long and I’m just fine with that. “Fans and Friends” rocks a soulful wah wah trumpet break and features guest vocals from LS. “ATM” is one of the jazziest piano rags I’ve heard in the backdrop of hip-hop for a long time, almost (but thankfully not quite) overwhelming Atherton’s strong vocal performance. “This is crushing funds the fun way; to me ATM’s just Another Tough Monday.” I’m feelin’ that. “Bold Fashion” features a cameo by Patio Decks and scratched in samples from Nas’ “Represent” that disses the “cookie cutter kids in Von Dutch.” I’m feelin’ that too. Of course any time hip-hop artists are willing to rock classical violins on a track it’s gonna get me open, and “Audio Oxygen” is one of the best to date. I’m sure I know the sample on Atherton’s self-produced “Three Simple Words” but his verbals draw me out of such thoughts into his intricately woven tale of woe:

“Nowwwwww when I finally fought for someone, that one special girl
I want to be her everything, her everyone, her world
Not hesitating (nahh) I’m trying hard to be patient
for a feeling that lasts longer than a month of infatuation
Interpretation of love has yet to be interpretated
Viewpoint is what some would de-SCRIBE as overrated
Somewhat jaded perhaps, chances that flew by
Now, I’m a man that stands beneath my standards too high”

Not to worry Atherton. There may be crowds and venues that front on you on long and arduous tours, but it’s likely that a cult following of Atmosphere style proportions will catch on in the end, and somewhere in there will be a woman who can say those three simple words. Then again one of the album’s longer songs “Mean Miss Treater” suggests he may not be in a hurry, seeing the downside of emotional scarring in past and present relationships as much from the woman’s point of view as his own. It’s not commonplace to find artists who are capable of that much thoughtfulness lyrically, but it’s dangerous for me to overrate Atherton given that I like him personally and feel he’s out there hustling hard and doing things the right way. It’s also a little bit embarassing to know Atherton’s been on the scene in Canada for five years and I had never heard a single song of his before Sunday night, but I’m not going to let any of those things get in the way of making a positive recommendation for “A Different Way of Doing the Same Old Thing.” Fans of the Rhymesayers or Def Jux camps will dig this joint right away as much as I did. Give Atherton a chance and see what Ottawa’s got cooking North of the border.