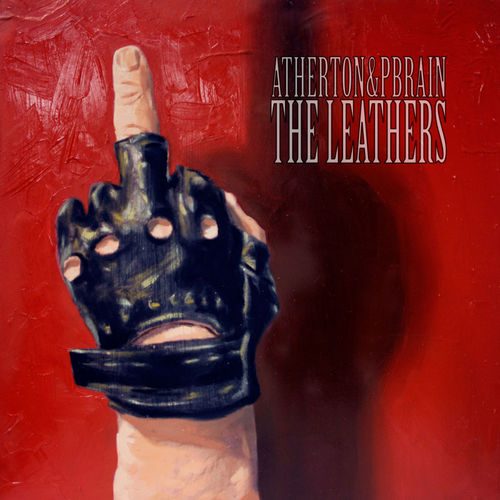 Having first been introduced to Atherton almost a year ago to the date of this review, I was pleasantly surprised to learn of his new group The Leathers. While Ath is certainly dope enough to hold down any project on the solo tip, collaboration is definitely where it’s at in 2009, so I can’t fault him linking up with a like-minded artist named PBRAIN to drop a group album. Their self-titled debut is described as an EP, but at ten songs long it’s a little more than what I usually think of as an extended play – yet simultaneously a little less than what I think of as a long player. Perhaps that just goes to show how outdated these terms are as vinyl holdovers in a largely digital age, even though neither this reviewer nor either of the artists on it would knock the value of wax to hip-hop. In fact Atherton initially offered to send The Leathers to me that way, but to save a buck or two we both agreed that a digital zip file would be easier than dealing with the Canadian postal system… or easier than following the opener, where each artist pretends to be the other!

Atherton: “My name is Paul, I like tattoos ‘n stuff
Don’t often read books that aren’t cluttered with pictures
Got big burly arms if you’re into warm hugs
Find bikes by the side of the road and I fix ’em
My business is burritos, I make ’em on the gusto
My friends are all fans of the music that I make
If you’re a fun girl then I’d love to love ya
My cinnamon beard will kiss your cute face, I’m Paul”

PBRAIN: “You can call me Devin or you can call me Ath
I don’t drink to get high but I still have a blast
Eggs over medium and butterfly sausage
I wrote an LP, my computer crashed and lost it
Troubadour spirit movin city to city
Check my Facebook status and you can live with me
Got a sister, a brother, I Skype with my mother
I’m often a lover but I’m not gonna love her, I’m Devin”

That’s how The Leathers introduce themselves to the listeners on the opening track “Paul & Devin.” Since Atherton is the type of artist to eschew pretentious imagery for heartfelt lyricism, it’s not surprising that he and PBRAIN open their self-titled release by shedding any conceptions you may have had about the lyrical alter egos they operate under. Oh wait – you didn’t HAVE any conceptions about their alter egos yet! PBRAIN is as new to this scene as he is to this label, and a majority of those of reading are (sadly) unfamiliar with Ath at this point. Perhaps it’s not as useful to disarm your image when nobody knows it to begin with, but you can’t accuse The Leathers of not being baldly honest.

Atmosphere fans will recognize this vibe as Slug tends to deconstruct himself over and over again, occasionally trying too hard to come off as nothing special even though he’s clearly one of a kind. One can say the same of Devin and Paul as they’re clearly on their own shit, making somewhat personal music that almost seems to have gotten released accidentally, leaked out from studio sessions when they got too high one night. “Heart Attack” sounds like a hospital monitor beeping out arrhythmia to rhythmic drum rolls and chanted/sung choruses, punctuated by video game noises and wrapped in an ambient blanket. To be sure it’s dope, but to be fair it’s a little out there for a lot of listeners. The PBRAIN produced “Hair Loss” is a little more down to earth, if sounding like an El-P limited edition seven inch single is more grounded. The heavily electronic track has D and P playing roles of psychiatrist and patient, until the patient snaps: “Don’t push me Doc! My skin’s startin to crawl/Keep talkin shit, I’ll Tie Domi * your wall.” The psychiatrist responds calmly: “Don’t try me Paul, all it takes is one call/And you’re back out on the street again with nothing at all.”

To say that this Vinyl Tap release is experimental, ruggedly underground and intended for only the MOST hardcore of backpacking rap fans would be a gross understatement. It’s not intended for anybody OTHER than this niche, and not even necessarily all of them. While the song’s title and topic matter are intended for humorous effect (as are many of their tracks) “Self Sabotage” seems like an apt title given that Atherton and PBRAIN take being underground to an extreme that will make their music hard to market outside the cultest of followers. That’s not to say songs like the whistling P produced “Bridge Breaks” or the guitar riffs of Dean Povinsky laced “Sweetener” aren’t dope – just that you won’t find a mass audience for it any time soon. If Vinyl Tap is trying to be the Def Jux of the great white North, the self-titled release of The Leathers definitely puts them on the right path – I just hope it’s not one paved with retail frustration.

* Tie Domi – 16 year veteran of the NHL known as an “enforcer” on the ice, famous for getting in a brawl with a fan after spraying a heckler with a water bottle.