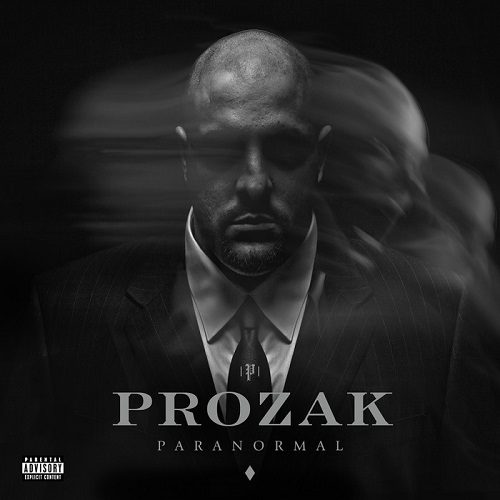 “Throughout life’s journeys
You will encounter saints as well as the heartless
But remember, in order to appreciate the light
One must spend time, in darkness”

So begins the latest opus from Sagniaw, Michigan’s own Prozak. “Paranormal” is the long awaited follow-up to 2008’s “Tales From the Sick,” an album that received high praise from RR staff writer Pedro ‘DJ Complejo’ Hernandez. While admitting the hyperbole he heaped on Prozak might SOUND excessive, he nevertheless declared the following: “Prozak flawlessly weaves through a dark, but political, world of despair, hope, love, hate, consciousness, and insanity.”

The sound blasting out your speakers on “Paranormal” will suggest that DJ Complejo hit the nail on the head. Stylistically you might be tempted to compare him to fellow Strange Music compatriot Tech N9ne, but that would only be paying him a compliment while simultaneously understating his appeal. “End of Us” is the kind of song that completely turns rap music on its ear in a good way. Sid Wilson from Slipknot provides the scratching, while Brad Fielder & Joe Kotts play guitar, and Jason Arnold pounds out the live beat. Even though Pro’s theme is darkness and gloom, the song is so energetic that jumping in a mosh pit and throwing caution to the wind sounds like fun. It’s that juxtaposition of death and life intertwined that makes his rhymes so compelling:

“How many times must you try and must you fail?
Freedom is a state of mind transcended through Hell
Give it up, walk away, you must conform to the norm
You’ve been a slave to the grind long before you was born”

The song reminds me of the potential to reinvent hip-hop displayed on “Judgment Night” that so many people could have capitalized on, yet so few successfully did. Not all of Prozak’s songs have a cutting metal edge, but all of them have the intensity of his delivery. The name really suits him – he sounds a little bit manic, like he probably needs to be medicated before he totally loses his grip and totally flips out. He might be the Edgar Allen Poe of hip-hop. Songs like the majestic “Tell a Tale of Two Hearts” pair his haunting prose with eerie pianos:

“For a, second I feel so alive
But then it, sets in that I’m nothin besides a ghost
My God – it’s empty – I wish I was set free
Afraid to leave, she will forget me
I scream in vain, and speak your name
It’s so hard when I see her in pain
And there’s nothing I can do to comfort her
Death itself couldn’t take my love for her”

It would be both easy and incorrect to bust out the cliched “horrorcore” tag for his music. Quite frankly a lot of the rappers who get that tag should not even be taken that seriously, because they simply grind out an endless parade of body parts and gore for shock value, and end up sounding like bad parodies of the very genre – schlock with no substance. Prozak is exactly the opposite – he is nothing BUT substance – turning out meaningful music and avoiding being unnecessarily macabre. “On your headstone, there will be two dates/all that matters is that line in the middle” is a typical sentiment that reveals his true secret: he may talk about death a lot, but he’s relishing every second of his life and encouraging you to do the same thing.

There are a minimal amount of guest artists on “Paranormal,” and that’s arguably because Prozak is a strong enough artist that he really doesn’t need the help. It’s not unwelcome to hear Tech N9ne on “Enemy” and “One of These Days” though, or Krizz Kaliko on the latter track as well. Twiztid also appears on “Line in the Middle” though, and other than Sid Wilson that’s it. If you have any doubts as to whether or not a rapper you may be new to can pull off an hour of music almost all by himself, the Michael ‘Seven’ Summers produced “Fuck You” should completely answer all doubts:

“I wrote this anthem for those who can’t fathom
For them industry schmoes who don’t know talent from Adam
And it’s, becoming obvious that they’ve been plotting on us
Tryin to stop us from accomplishing, profiting dollars that are ours
We underground man, we do it ten times harder
Hella shows, paying dues, we true to life artists
Hustle mentality with confidence to reap heartless
Straight to the top, defy gravity to reach farthest”

There are ’nuff moments I could praise throughout “Paranormal.” The crunchy sound of “Wake Up You’re Dead” is what Ice-T wishes Body Count had been or could be. “Until Then” shows Prozak’s versatility by spinning his own version of a bluesy Everlast track and doing it better. “Turn Back” is both melodic and heavy, while “Farewell” is a disturbing skin crawling tune which suits his critique of domestic abuse (something that should give ALL of us the creeps). A majority of the production is by the aforementioned ‘Seven’ Summers, and he deserves praise for teasing out just the right notes for this artist. He may be marketed as a modern day hip-hop Michael Myers, but don’t let the packaging fool you – Prozak is both dark AND upbeat. If that sounds impossible, swallow his pill and feel the effects for yourself.