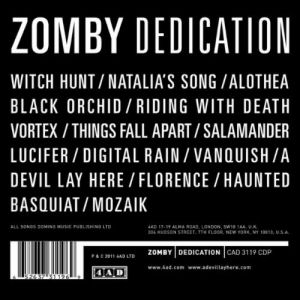 The line between instrumental hip-hop and other types of electronic music gets hazier every day. Producers like Clams Casino and AarabMuzik make hip-hop beats that draw from ambient and electronic music. On the other end of the spectrum are albums like British electronic producer Zomby’s latest, “Dedication.” It is classified as dubsteb, but it sounds an awful lot like hip-hop.

The album opens up with “Witch Hunt.” With its skittering hi-hats and gunshots, it sounds like Southern street rap. “Alothea” has icy synths and the pulsing beat of downtempo dance music, but it has a bounce that you could imagine A$AP Rocky rapping over. “Vortex” has a nice grimey feel, and the gunshots, hi-hats, and snapping snares return in “Things Fall Apart.” Even some of the more straightforward electronic songs, like the sinister and stripped down “Riding With Death,” throw in what sounds like Lil Wayne saying “Yeah!”

Not all of the album could be mistaken for hip-hop. “Natalia’s Song,” a collaboration with Brazillian producer Reark, has a hiccuping beat, female vocals, and swelllng synths. “Vanquish” is a straight ambient piece; “Lucifer” sounds like 90s rave music; “Black Orchid” is a 90-second keyboard solo punctuated with video game sound effects.

Zomby’s first album, 2008’s “Where Were U in ’92?” was a much more dance-oriented record. Fans expecting more adreneline from Zomby were no doubt confused by the downtempo and reflective “Dedication.” Much of this album is seeped in sadness, and there is very little here that could get people on a dance floor.

The explanation for both the melancholy and album title can be found in the sole liner note: “Dedicated to BDM 11.11.46 – 25.06.10.” The dates refer to Zomby’s father, who died soon after Zomby was signed to 4AD and started work on this album. The resulting album was dedicated to his father’s memory, and contain music that was made while Zomby was in mourning. It may not be great dance music, but it is a moving and beautiful elegy. “Haunted” lives up to its name with piano, strings, and a barely audible beat. “Basquiat” is even barer, with just a lone piano and some ambient noise.

The album ends with “Mozaik.” It is more uptempo than most of the last half of the album, but still retains the sense of loss. Pulsing keyboards play over a marching beat, getting more and more upbeat until abrubtly cutting out at the 3’12” mark. It’s a jarring end to the disc, one that startles me every time I listen to it. It seems to evoke the sudden sense of loss of the death of a loved one. One minute they are moving forward, and then, without warning, they are gone.

Zomby probably didn’t mean “Dedication” to be understood as a hip-hop album, and it may be a stretch to interpret in that way. Still, he uses some of the same musical vernacular as Southern hip-hop producers. More importantly, he made an album that uses synthesizers and programmed beats to evoke geniune emotions. In that sense, it fits on your record shelf next to Dilla’s “Donuts” or Madlib’s “Dil Cosby Suite.” Whatever genre you want to label “Dedication” as, it is a remarkable album.