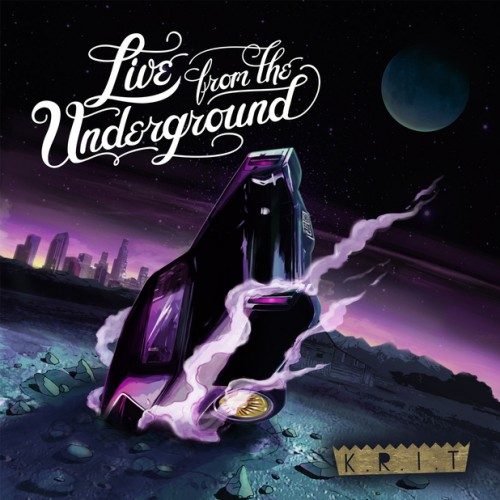 Big K.R.I.T. :: Live From the Underground

Reading those lines from 2005 now almost seems prophetic, but that was the attitude that Big K.R.I.T. has always seemed to inject into his music. Most of the world, self included, didn’t really take notice of him until 2010’s “K.R.I.T. Wuz Here,” but Krizzle was doing his thing way before then. Years prior, K.R.I.T. dared the world to picture him being a success with his “See Me On Top” and “See Me On Top II” mixtapes. It was a pretty lofty goal, being that Justin Scott was only 18 years old at the time, but he remained focused. Back then, K.R.I.T. was still developing his voice and the sounds of others that certainly influenced him could be heard in his flow. Southern legends like T.I., Juicy J, MJG and even a bit of Pastor Troy definitely appear to have left their mark on the younger BK, as he then sometimes would call himself. On the production side, Kritikal was the name and the beats weren’t always as soulful as they can be now. On the other hand, many of his beats had a Hypnotized Minds feel to them, so there were always glimmers of his potential. For example, “Just Touched Down” first appeared on “See Me On Top II” before undergoing several tweaks both lyric and production-wise before the release of “K.R.I.T. Wuz Here.” With that release, the internet world began buzzing about a dude from Mississippi that wasn’t David Banner and sounded a hell of a lot like Pimp C. I usually don’t feed into hype but on a whim, I decided to give the project a listen. Honestly, initially I gave K.R.I.T. a chance because of where exactly in Mississippi he was from. Meridian is not far from the state line at all and I have family on the other side of that line over in Alabama. When I visit down there, we go to Meridian to do our shopping at the Bonita Lakes Mall. I’ve taken photos at the Bonita Lakes Park. Very nice place. In any case, I listened and thoroughly enjoyed both the regular and chopped & screwed versions of the project. On the strength of “KWH”, K.R.I.T. ended up landing his deal with Def Jam and began to work on his major label debut album.

Time continued to pass and the “Return of 4Eva” project was supposed to be the warm up to the aforementioned major label debut but the album ended up being pushed back. The delay didn’t seem to bother fans too much as the praise continued to come in and K.R.I.T.’s notoriety continued to flourish. On the next date that “Live From the Underground” was supposed to hit the streets, the fans had to settle for the chopped & screwed version of “R4” instead. K.R.I.T. continued to tour, produce and make appearances on the albums of others but wondered if his would ever see the light of day. Citing sample clearance issues this time, the album was pushed back until June. In the meanwhile, another critically acclaimed mixtape, “4evaNaDay” was released. This time being powered by the inspirational single and video for the track “Boobie Miles.”

Now we have come to that point that every artist dreams of…their debut LP. After giving away what many people have considered to be three albums for free, the question is whether or not K.R.I.T. can still deliver the same level of quality that his fans and critics are accustomed to hearing. For what it’s worth, “Live From the Underground” has been in the works for twenty-five years (more like only two in reality, however). Featured guests on the album include Ludacris, Bun B, 8Ball & MJG, B.B. King, Anthony Hamilton, Melanie Fiona, Devin the Dude, recent phenomenon 2 Chainz, partner in rhyme Big Sant and K.R.I.T.’s dearly departed grandmother Ms. Linnie. In some ways, the album comes off as a dedication to K.R.I.T.’s fans that have been down with him for the longest. The track “What U Mean” gets its title from one of Krizzle’s most famous bars from the “K.R.I.T. Wuz Here” project, “My Sub (Pt. 2: The Jackin’) is a continuation of the first song from “R4” and the familiar voice of his grandmother was previously heard on “4evaNaDay.”

With a space-age funky track as the backdrop, Vashtie recommends turning the volume to maximum velocity before giving way to K.R.I.T. who opens things up with a poem, setting the tone of the album on “LFU300MA.” The “300” represents the 300 block where K.R.I.T. hails from. On the last few releases, there has been a theme song to encapsulate the mood. This time around, the title track introduces the mainstream to an unapologetically southern hip-hop artist that’s unwilling to compromise that at any cost. Subsequently, the jazzy “Cool 2 Be Southern” does well to expound on the theory that the dirty south culture is being accepted on a larger scale nowadays. The infectious Willie Hutch-sampling “I Got This” is full of bass licks, snares and snaps, along with a little bit of Willie himself and was seemingly designed to be played very loudly. The track is a celebration of self and K.R.I.T. nails it, as he raps:

“Now I suppose I’m doing alright, ever since I blew
Don’t be worried bout me and don’t worry bout mine player, worry about you
And ain’t nobody gon’ block my shine today, with the roof gone
I got a top notch bitch, you need something like this BUT… you gotta get your own
And ain’t nobody gonna rep this hard
When I’m choppin’ down the boulevard
Now they hollerin’ out ‘Oh my God’
Cause they never seen rims this large”

The first single that was released before all the delays was “Money On The Floor,” a slow rolling track that fits the flow of 8Ball & MJG perfectly. 2 Chainz holds his own here as well, but the real standout is the production. The question “What you mean you ain’t nasty?” should be included in every dating website’s registration form if applicable. Here, it forms the basis for a decent-at-best track with a marginally forgettable guest verse from Ludacris. The first part of “My Sub” ended with K.R.I.T. picking up a girl while bumping some classic Regina Belle. On the second part, we find Krizzle grabbing a few of the essentials like chips, drank and peppermints. After reaching the friendly neighborhood motel and taking a call from DJ Wally Sparks, we learn that the girl actually set K.R.I.T. up but she doesn’t want him to be hurt. It’s a nice piece of storytelling that almost seems to work in tandem with the P-Funk inspired “Don’t Let Me Down” that follows. The slight distortion, crooning and guitar work would make George Clinton and the late Eddie Hazel proud.

Anthony Hamilton belts out the hook on “Porchlight” and I guess K.R.I.T. and the girl from “Red Eye” have worked out their differences because here he speaks as if there’s an understanding about him having to be away at work. The song is about having to be on the road and all, but eventually coming home and wanting to arrive to a warm welcome. “Pull Up” is purely stuntastic in nature and the bottom line of the matter is that no one is going to top K.R.I.T. when he pulls the drop out. The underrated Big Sant and Bun B also make appearances on the track. Bobby Womack and Willie Hutch are two of K.R.I.T.’s favorite sample sources. A chopped up sample of the former is the canvas for “Yeah Dats Me” and it’s similar to “I Got This” in many ways but I feel as if this track pales in comparison. Devin the Dude falls through for a bit of “Hydroplaning” as K.R.I.T. rolls up something to smoke and pours up something to drink. It’s a track that should wind up being a sure-fire hit with those who like to indulge in those activities. Melanie Fiona joins K.R.I.T. for the inspirational “If I Fall” that would probably do well as a single further down the line.

Just like with his last three projects, as the album progresses, the subject matter gets heavier. This time around, we get “Rich Dad, Poor Dad” and the B.B. King-featuring “Praying Man.” The former is K.R.I.T.’s tribute to his father as he expresses his gratitude for all the game and life lessons he taught him over the years. The latter tells three narratives of people embroiled in racism. One is a man that’s hanging from a tree. Strange fruit. The others are a would-be slave that jumped overboard the ship to escape captivity and a slave that decided to run away in pursuit of their freedom by way of the Underground Railroad, as he raps:

“Well, I was workin’ in the field and one of my kinfolk just got killed
And I knew they’d come for me and Lord knows I wanna live
And I heard there’s people free not too far, but far for me
To be runnin’ from these dogs with no shoes up on my feet
I heard of the railroad that ventures underground
And takes my kind of people to a place where we can’t be found
And I’ve been wounded for some miles, but decided to rest my head
I guess they let me go because they assumed I was dead
He smiled and said ‘Son, get in this wagon and get settled’
He offered me a ride and drove me far from my oppressor”

The album comes to a close with a reprise of the title track which features some great guitar work and a harmonica that really gives the song a country feel. In a stroke of genius, K.R.I.T. adds some vocals from his late grandmother Ms. Linnie and she then thanks us all for listening. A complaint that many critics seemed to have about K.R.I.T.’s previous offerings was that they seemed to be a bit too bloated. That isn’t necessarily the case here, but perhaps dropping a track or two from the final product could have made for a more compact package overall. At first glance, I felt as if there were too many features on the album, but they seem to serve a purpose. In the end, I think that long time fans of Big K.R.I.T. will find the album to be well put together, but they’ll still be left wanting just a bit more. It’s not to say that the album is bad, because it isn’t. I feel that since K.R.I.T. put his all into his past mixtapes, many were expecting the same. I believe that an artist like K.R.I.T. has the potential to be great and although the word “underground” is in the album’s title, we’ve only scratched the surface and there’s no telling what the future may bring. Call me crazy, but I don’t think this G will be anywhere near the bottom for a time to come.