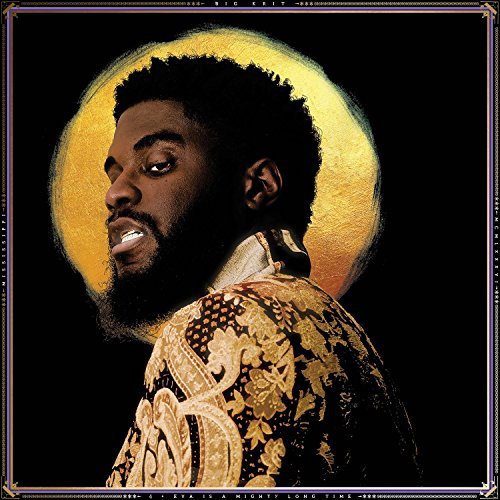 4eva Is a Mighty Long Time

Forever is a mighty long time. In fact it seems like forever since Meridian, Mississippi native Big K.R.I.T. broke out with his “K.R.I.T. Wuz Here” mixtape in 2010, it feels like forever since his first album with Def Jam, “Live From the Underground” was released in 2012 and it even feels like forever since his “It’s Better This Way” mixtape dropped in 2015. Last year, K.R.I.T. dropped twelve freestyles over the course of twelve hours and months later announced that he was no longer with Def Jam. His frustrations with his time at the label were chronicled in his song “Free Agent.” Now back as an independent artist once again, K.R.I.T. presents a 22 track double album in the form of “4eva Is a Mighty Long Time.” In addition to K.R.I.T. himself, the album features production from DJ Compstar, Mannie Fresh, Organized Noise, DJ Khalil, Supah Mario and WLPWR. Guest appearances include T.I., Lloyd, UGK, Cee-Lo Green, Sleepy Brown, Joi, Jill Scott, Keyon Harrold, Robert Glasper, Burniss Travis and Kenneth Whalum. The idea at play with the double album is that one disc represents Big K.R.I.T. – the artist, and the other represents Justin Scott – the man. For what it’s worth, Big K.R.I.T.’s albums have always followed the same trajectory: Starting with trunk-rattling southern anthems before delving into deeper and more introspective topics. One could see this album as an elongation of that formula.

Disc 1 begins with “Big K.R.I.T.” where he delivers a spoken poem for a minute before the bass drops and a fiery K.R.I.T. comes out swinging as if he has a point to prove. We’ve seen this from him before in the past (see “Mt. Olympus” and Big Sean’s “Control” remix) and even K.R.I.T. himself decides that he needs to calm down. “Confetti” and “Big Bank” follow. The former comes off as a reality check for those who may think that they’re really on top of the world and doing everything big when in fact they aren’t doing very much at all, while the latter features T.I. and the two kings are at their s–t talking best just as anyone would expect. “Subenstein” is the fourth part in K.R.I.T.’s long running “My Sub” series and is co-produced by Mannie Fresh. True to its name, the track has enough bass in it to bring everything in its immediate vicinity to life, replete with the occasional mad scientist proclaiming that the bass is alive indeed. “1999” features Lloyd on the hook and his heavily influenced by Guy’s “Piece of My Love” making it a perfect fit for the clubs of uh, various types, but it feels like the track will do well in strip clubs.

It’s no secret the one of K.R.I.T.’s biggest influences is UGK. The duo of Bun B and Pimp C make an appearance on the Cory Mo produced “Ride Wit Me.” While it has almost been 10 years since Pimp’s passing, his vocals and adlibs fit perfectly on the track in a way that can’t help but make one wonder what kind of chemistry he and K.R.I.T. would have had. “Get Up 2 Come Down” follows and features the vocals of Sleepy Brown and the rhymes of Cee-Lo Green, who coincidentally puts his own spin on the late Pimp C’s inflections and delivery. “Layup” is a mellow track perfect for a late night drive but also has a bit of an inspirational touch to it as well for those who work hard but have yet to reap the benefits. The first disc comes to a close with “Aux Cord” and “Get Away.” The former is a homage to artists that came before K.R.I.T. like Bobby Womack, Sly & the Family Stone, Michael Jackson, Atlantic Starr, Eddie Kendricks, Marvin Gaye and even more contemporary artists like Raphael Saadiq, D’Angelo and Jill Scott. The latter is quintessential Big K.R.I.T. with a sample that comes in and builds up until the heavy bass drops and flows that are braggadocious and uplifting at the same time, as K.R.I.T. raps:

“I put the piece on chain, I did that s–t for the haters
Made in the image of greatness, I got that there from my makers
Skipped over the minor leagues, and took that s–t to the majors
F–k all that salt they was tossin, sauce got plenty of flavor
I’m on my shine like a chrome grill, when the sun out gon spill
That paint on a time machine, that’s set on some chrome wheels
[…]
Put my faith in God, even when it’s dark I won’t stop
Flip them high beams on, hit that gas to the top
I got love for my people, they got love for me
I know my power, what I’m worth and they bulls–t free”

With a lengthy instrumental at the end, it’s the perfect track to transition from the Big K.R.I.T. to the Justin Scott portion of the album. The opening number of the second disc is mostly instrumental and rife with blues and soul but it has just enough touch to make it not sound dated. The first few songs on this disc, “Mixed Messages,” “Keep the Devil Off” and “Miss Georgia Fornia,” all tackle issues that Scott finds himself at odds with regularly. On “Mixed Messages” K.R.I.T. struggles with the hypocrisy in some of his music and in life in general. He has a lover, but still wants to cheat. He has money so he no longer feels the need to pray or go to church anymore. He wants to know if it’s wrong to life in such a manner and is a refreshing look in the mirror that many more of us should be having. The organ, electric guitar, trumpet and claps on “Keep the Devil Off” work very well together to ward away any form of negativity that dares to rear its ugly face. It’s a feel-good track that takes you to church literally. “Miss Georgia Fornia” finds K.R.I.T. explaining to his beloved Mississippi (in the form of Joi) that him moving to Atlanta and possibly Los Angeles was all done for her and he’ll never forget her. He pleads for the chance to bring all the shine back home to her when he returns. “Everlasting” and “Higher Calling” follow and we find K.R.I.T. falling in love in the most awkward of places and nurturing it until it grows beyond his wildest expectations. “The Price of Fame” examines the trappings of fame that may not be so obvious to the naked eye like being alone in a crowded room full of strangers and developing addictions and being depressed. It’s a heavy subject but Scott handles it with care. One of the album’s standout tracks is the stellar “Drinking Sessions” which finds K.R.I.T. giving his musings on subjects that he says don’t necessarily fit into other songs, so he opts to let them all out after he’s had a few tastes of liquid courage, as he raps:

“I’mma be big, mama… I’mma get rich, mama
I’m sorry I ain’t got a wife and kids mama
But look what I did mama
Got a house I can barely stay in, a car I can barely drive
I’d be a liar if I said getting money didn’t make me feel alive
Hustling, arguing about who’s better than I in tweets
But what does it matter when a new artist comes out like every week
All the label all on they nutsack, good for them keep sucking
Most rappers will bend over backwards,but me? B—h I’m not for f–king
Over…I’d be the biggest star they told me
Sign my name on that line and when I die, that’s when it’s over
[…]
I got my gumption from my granny, had a dream about her like last night
She held me tight and told me “Little one, everything gon be alright
My mind playing tricks on me, but I needed that there
In a world where I feel all alone, sometimes I need her care
It’s hard to share my insecurities so I medicate, I mean meditate
And pray to God for a second chance, for heaven’s sake”

The album closes out with the socially concious “The Light” and “Bury Me in Gold.” The former features Bilal, Robert Glasper, Burniss Travis and Kenneth Whalum. The overarching theme of the track is that anyone could become a victim of their environment at any time and the light represents a small glimmer of hope, protection and safety. The closing song has a modern gospel feel and K.R.I.T. says the intention is not to glorify gold, but rather to say that he would give everything up to be happy.

On a whole double albums without a theme are tricky. Double albums with a theme prove to be even trickier. It’s a daunting task but Big K.R.I.T. does a good job of separating the two personas at the end of the day. If the album was about 5 or 6 minutes shorter, it could have fit on a single disc but perhaps at the expense of the narrative. The double disc format really helps to drive home the point when the listener wants to switch from Big K.R.I.T.’s “Get Away” to Justin Scott’s “Keep the Devil Off.” It requires the effort of changing discs. While mainstream success has more or less eluded him, Big K.R.I.T. has always been a formidable emcee. There’s an old adage that states that everything happens for a reason. Perhaps K.R.I.T.’s experiences were all a means for him to bare himself in such a manner that he hadn’t been able to do before. At the end of the day, “4eva is a Mighty Long Time” is a quality release that longtime and new Big K.R.I.T. fans alike will enjoy for quite some time or perhaps even forever.