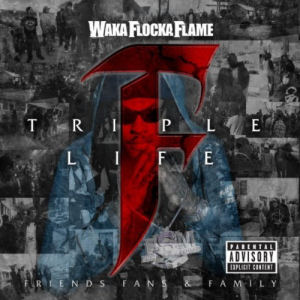 I’m just gonna be honest here – I didn’t want to review this album. I think it’s fairly obvious by now Waka Flocka Flame doesn’t impress me. There’s a diverse range of opinion on this site though, and I’m very thankful for that, as writers like Patrick Taylor see things in Flocka that I’m not able to. I avoided this album as long as I could hoping that another writer would pick it up, but as this is the last Tuesday of the month and the album came out two weeks ago, I feel obligated to cover this for the readers before June turns to July.

“Bounce dat ass, shake dat ass like the Twerk Team (Whoo!)
Hair long, ass phat — shawty mean (Flocka!)
Dat girl look like Halle Berry when I’m on them beans (Rosaaaaaaaay!)
When I hit the scene, girls yellin and they scream
(C’mere!) ‘Flocka, can you be my baby daddy?’ (Yes!)
Pimpin like I’m Dolemite, hoes jump in my caddy (BOW!)
Smoke like I got cataract, in the strip club throwin up them stacks
Got racks on top of racks (Racks, racks, racks)
Bust that pussy make dat ass clap, clap, clap (Pop! Pop! Pop! Pop! Pop!)
I ain’t done wit’chu, baby bring that ass back
Still got twenties, still got fifties, even got them hundreds
Throw some money, throw some money, I’ma let it go
Waka Flocka Flame better known as Mr. Let-It-Go”

I can say this for Flocka, and he’s not a rapper I’m normally prone to shower with compliments, but he does know how to create a crossover hit. With Lex Luger on the beat and a cameo verse by Drake, “Round of Applause” made the transition from “another insufferable song by a waterheaded pea brain mush mouth” to “something I won’t turn the radio in my car off for when it comes on.” Anything that can make me not turn the stereo off that involves Waka Flocka deservesSOME kind of recognition. Coincidentally “Triple F Life” follows that song with another one getting radio play I find more or less tolerable – “I Don’t Really Care” featuring Trey Songz in a prominent role. Skyy Stylez and Troy Taylor hold this song together, even though after hearing Waka say his own name and the word “swag” enough times, it’s a close call.

I suppose it would have been too much to ask that “Candy Paint & Gold Teeth” follow those two. Guest rap verses by much more talented rappers Bun B and Ludacris elevate the song, and the production from C.N.O.T.E. and RedWine is just the right amount of funk for the trunk. Not all guest appearances can save songs though – the melody of “Let Dem Guns Blem” featuring Meek Mill is just monotonous – the same horror movie cliche that’s been done to death by now. “Lurkin” featuring Plies sounds like a remix of it, and not in a good way. “Everything I Love” featuringFuture has the same problem I had with Waka and Gucci as a team – that’s just pairing one incomprehensible artist with another. Considering how much respect Waka says he has for Slim Dunkin, to the point he went on an artistic hiatus after his passing, I can’t understand putting him on the same song with Travis Porter on “Flex.” Maaaaaaaaaaaaaaaaaaaaaaan, let the dead REST. I doubt he’d be happy about this one.

There are enough songs with worthwhile beats and guests to hold this album together to some degree, and depending on whether or not you like Flocka’s lyrical style will be the degree. I mean there’s no doubt Tyga, Nicki Minaj and Flo Rida are an all-star line-up on “Get Low” and the Boy-1Da production is fire, but that just goes to prove this song would be as good or better without Waka on it. “Fist Pump” featuring B.o.B really feels like it should have been the other way around, though it would be a good new theme song for Zack Ryder either way. The most inspired collaboration may be having A$AP Rocky on “Barry Bonds,” but unfortunately that’s an iTunes exclusive bonus so many of you won’t get it. Still considering Amazon is selling their 15 track version of the album for $5.99

there might be enough beats and guest starts to justify you picking it up at such a low price. Without them though it would be a Waka Flocka album by itself, which to me is no buys at ANY price. “Triple F” is the grade I give his rap skills, so it’s a fitting title. Call me a hater if you want to, but if you can’t hate shit when you smell it or hear it, then God shouldn’t have given us that emotion, because in truth it’s a natural defense mechanism for avoiding CRAP.