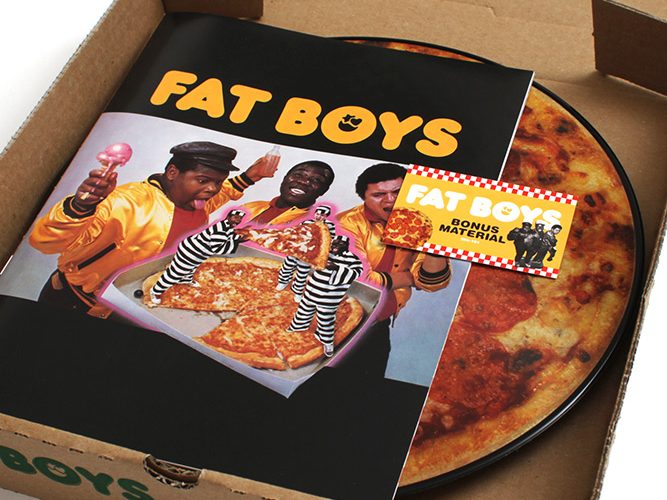 Before Biggie, Rick Ross, Heavy D, Big Pun, Chubb Rock or any other chunky phenoms in hip-hop, there were the Fat Boys. If you wanted to look at the Brooklyn-bred trio as a husky man’s version of Run- D.M.C., I’d wholeheartedly agree with you. While immortalized first by Chris Rock in the movie “Boomerang” and subsequently in a famous lyric by Jay-Z, the Fat Boys are largely overlooked in the pantheon of hip-hop legends. For anyone who might’ve missed it, the Fat Boys were the first to record beatboxing on wax, part of the first corporate-sponsored rap concert, had a appearance in “Krush Groove,” garnered video rotation on MTV and were one of the first rap groups to tour in Europe. The story of The Disco 3’s meteoric rise to stardom is an interesting one. Prince Markie Dee, Kool Rock Ski and Buff Love the Human Beatbox met during their childhood in the eastern section of Brooklyn. Inspired by “Rapper’s Delight,” the guys decided that they would form their own rap group. There were originally three other members in the crew and they billed themselves as The Hypnotize Five featuring DJ Doc Nice (aka Buff Love). The group would become the Disco 3 after it became evident that the other three weren’t as dedicated to the mission at hand. The 3 began performing at talent shows in the area and soon enough, the 3 found themselves entering WBLS’ Tin Pan Apple Dance & Rap Contest. During the semi-final round, the 3 found themselves simply going to support another group called The Bad Boys in hopes of getting put on one of their records if THEY won. As fate would have it, the 3 won instead and then went on to Radio City Music Hall and won the whole pie.

The prize was a record deal with Sutra Records, but the first single they dropped in late 1983 entitled “Reality” went largely unnoticed. This prompted their management of Charlie Stettler and Lynda West to reach out to one of the biggest names in rap music at the time to produce them, none other than Kurtis Blow. The switch to Kurtis Blow coincided with a name change, they were now officially known as the Fat Boys, but they would continue to make references to themselves as the Disco 3. One of their first songs under the FB moniker was simply titled “Fat Boys” and was an instant hit in 1984. Blow then assembled his own team to complete their debut album of the same name. Now, some 28 years after its release on vinyl, the album has been remastered and released in CD format. I really wanted to use a pizza slice metaphor here while going through the rigmarole of exploring the album’s tracks but being that there are only 15 (one track is not included in the track list) as opposed to a number that is divisible by both 2 and 4, it’s kinda impossible. I guess I’ll take a different approach: This deluxe edition of “Fat Boys” is like a three-course meals of sorts. We have an appetizer of interviews with the late Mr. Magic on WBLS, the seven-track main course of the original album and a dessert tray of bonus tracks that includes the first single the Disco 3 cut after winning the contest. Although the track listing does not reflect this completely (The sequence is album, bonus cuts and then interviews), one could certainly make an argument for it.

The album opens with “Jail House Rap,” a tune that personifies the style of humor the Fat Boys would come to be known for. Prince Markie Dee ends up in jail for wielding a 12-gauge shotgun, breaking into a closed pizza shop and eating himself into a food coma while Kool Rock Ski runs up a tab at Burger King and refuses to pay the bill. If you’re a rap fan over the age of 25, the phrase “Brrrrrrr, stick ’em” should almost instantly elicit a response of “Ha ha ha, stick ’em.” Markie Dee & Kool Rock do their thing, but the magical element of “Stick Em” is Buffy’s beatboxing which lays the perfect foundation for the raps. Fans of Dru Down’s 1996 hit of almost the same name will recognize “Can You Feel It,” the track that remains to be my favorite Fat Boys song and video of all time. Energetic and full of swag before anyone even had the notion to use the word on wax, the Boys want to have the dance floor filled to capacity, as they rap:

Prince Markie Dee: “Grab up a girl and get on the floor
And listen to Markie Dee’s rhymes galore
Because the music is fresh, so darn funky
The highs are crisp and the bass is chunky
And the final ingredient, the movement of the feet
A complete street meet, a funky fresh treat
The jam is halfway through, you sit down for awhile
A young lady approaches with a very big smile
She wants to dance, but your feet are sore
But later for that, you go and dance some more”

Kool Rock Ski: “The man that’s on the mic rappin’ to a fresh beat
Is none other than the money-makin’ Kool Rock Ski
The MC powerlord of the minion emcees
With the funky fresh rap that’ll get you out your seat
So tell me can you feel it and relive to reveal it
Cause if you do, my friends, you’ll need a pain killer
Rock to the beat, put your body to it
Find a new dance and learn how to do it
So when you come in the place and feel our rhythm
You’ll be on time with the def momentum
Stop perpetratin’, get on the floor
And listen to the two with the rhymes galore”

“Fat Boys” was the braggadocios introduction to the Disco 3 under their new moniker. We find them embracing their size and letting it be known that regardless of what shows up on the scale (they claimed it was 1000 lbs combined) they’ll be fly, fresh and could pull your girl in a heartbeat. The production on “The Place To Be” is as simple as it gets with a kick drum, snares and a few 808 snaps, but it works as Markie and Rock trade verses. Buff Love even gets in on the action with some bars of his own. Buff Love once again showcases his talent on “Human Beat Box” before the original album closes with “Don’t You Dog Me,” a plea to any ladies that may be romantically interested in any of the Fat Boys. They simply want to be treated right and not have their kindness and taken for weakness. Seems reasonable.

Moving onto the bonus meals, in addition to a Mr. Magic promo spot, there are also the songs “All You Can Eat” from the Krush Groove soundtrack, “International Love” (a promo-only B-side from the “Fat Boys” single) and “Reality.” The latter was the song they recorded after winning the talent show. At the time, many groups were trying to create their own version of “The Message,” so this was the Disco 3’s take on it. The odd thing about the track is it sounds a lot like Kurtis Blow’s “8 Million Stories” but it is the only song here that is NOT produced by Blow. The credit instead goes to James Mason. Also included, as I mentioned are three interviews with the late Mr. Magic as we listen to how the Boys came together and how they’ve adjusted to their newly found fame.

In the years that followed, the Fat Boys released several more albums, appeared in movies like “Disorderlies” and they even recorded the theme for “A Nightmare on Elm Street 4: The Dream Master.” Prince Markie Dee decided to break from the group in the early 90s while Buff and Kool Rock tried to push forward as a duo. They ended up disbanding after one last album. Unfortunately, Buff Love died of a heart attack in 1995. The two remaining members reunited in 2008 and reportedly have been working on new material. As great as that all sounds, I don’t think that anything they make now will be able to compare to what they did back in 1984. This isn’t a knock on Prince Markie Dee and Kool Rock Ski by any means, it’s more or less based on my opinion that what the Fat Boys did back then was magical and without Buff Love, it just isn’t the same. Back then, the Fat Boys were a breath of fresh air…or perhaps breath filled with pizza sauce, tacos, spaghetti, and donuts. In any case, if you can’t feel that, maybe you need a few more helpings until you do.