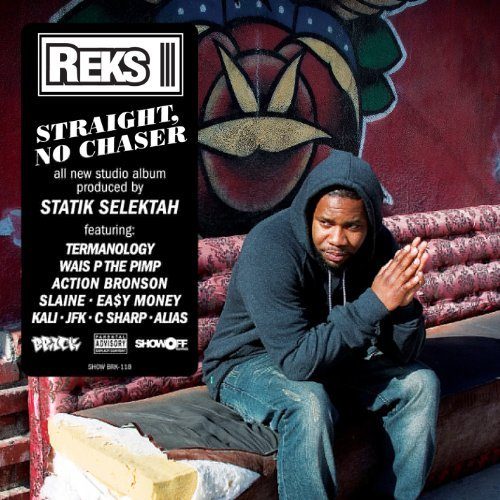 I’m going to try not to gush here, but it’s not going to be easy for three reasons.

#1. “Rhythmatic Eternal King Supreme” was one of my favorite albums of 2011.
#2. Statik Selektah is one of my favorite underrated rap producers.
#3. Combinining the two is like letting a fat kid into an all-you-can-eat cake buffet and saying “GO FOR BROKE.”

“A mother’s tears, pillows smother
When the pigs handcuff ya, paddywagon stuff ya
Hidden hands snuffa ya, written plan darker skin equals suffer
Legal judge it illegal before proving other
Wise the brother who eyes discover
The sign of such a, agenda hidden, a villain’s vision
Left patrol but not control the killing
Give him pill and let him swallow God willing
System Hell driven; we shotgun with shotgun chillin
You pop son, now son’s pops kneelin
by the tombstone, move from home I got kids want ’em safe to roam
But sad to say every place like a danger zone”

It’s not just that Reks is pondering the problems and perils of life on “Sit/Think/Drink,” it’s that his impeccable flow is paired with the beautiful ivory melodies and softly strummed snares Statik selected, all with a cut and scratched hook of Common saying “I sit and think with a drink about how I’m gonna win.” THIS is hip-hop. Whatever you’re doing right now, if you haven’t heard this song, scroll back up to the video and press play THEN continue this review. I implore you to not miss out on this song.

Actually I implore you not to miss out on this album. “Straight, No Chaser” is 48 minutes of Reks that goes by too fast – and I’m not talking about the “Power Lines” featuring Ea$y Money seems to pick up tempo gradually from start to finish. It’s probably my ears playing tricks on me though, or just the fact I get amped up listening. Guest appearances are kept to a minimum though, and only figure in where appropriate – such as Action Bronson on the buddy flick “Riggs & Murtaugh,” Alias on “Sins” and Slaine on the title track. He’s keeping things very East and very Boston, which is fine by me, because a Reks album wouldn’t sound right any other way. From the braggadocious “Such a Showoff” featuring Kali and Termanology to the somber “Regrets,” Reks quite literally has something for everybody here. This is a solid album start to finish.