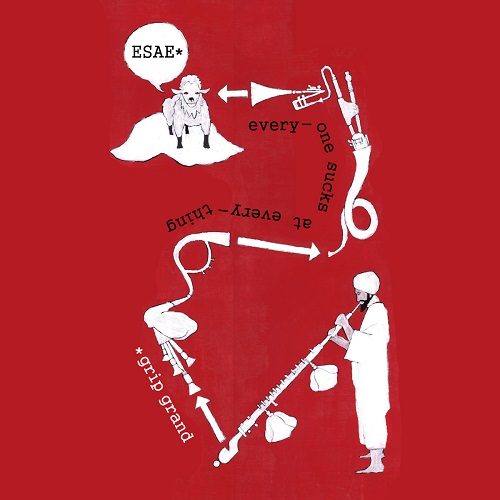 It’s startling to discover that over four years have passed since Grip Grand released “Brokelore” to such critical acclaim. My own (embarrassingly deficient) review of that album didn’t do it justice: if I could hop back in the DeLorean, the focus would be more on WHY it was so good, plus an added boost to the score (up to a 9.5 or 10). It was an incredibly well-rounded album that connected on every level, and it is surely one of the great crimes within hip hop that such talented rappers/albums remain unheralded gems. His new album “ESAE (Everyone Sucks At Everything)” is a brief offering, more a collection of some road-tested songs over the last few years. Truly, it is EP length, with seven full songs and an instrumental. Yet, quality prevails.

His lyricism consists of unstoppable flows, ingenious punchlines and deep humanity. There have been frequent comparisons to Kanye West over the years (early ‘Ye, that is) and it’s easy to see why. To be honest, that’s a slight disservice to Grip, considering he is the more impressive MC in most ways. It’s difficult to describe this as “underground hip hop” â€“ it’s more universal than that. He’s also an accomplished producer, one with an ear for drums, melodies and terrific sequencing. ESAE, as ever, has the feel of an underdog â€“ but one that could well and truly kick your ass lyrically at any point.

The monster opener “Champainful (I Can Do Anything)” gets things off to a stomping start: think Just Blaze 2004-era instrumental, with lines like “I’ll beat your fucking style up, that’s a hate crime” peppering the track. The almost “Kid A” style of “Holding My Breath” is an abrupt switch of styles, but it’s brilliant and reminiscent of “Tomorrow.” It’s followed up by a “Big Bang Theory” type of scientific breakdown in the form of “Conversation of Matter” â€“ bringing to mind the random genius of earlier Jay Electronica, although the beat is just a touch below Grip’s usual level. “Rain, Rain” is a relaxed and irreverent affair that hits the nail on the head (especially for this UK-based reviewer being pounded by wet weather all summer long).

After a dope one minute musical interlude (perhaps this could beat have been used on “Conversation of Matter” instead?), we head off to “Jupiter” â€“ a long and winding track that snakes around your imagination. The song that probably should have closed it all is “A New Drug (Work In Progress)” â€“ without a doubt one of the best moments that Grip Grand has ever conjured up. It is simply stunning. “Pick Me Up” brings things to a halt, and it’s the kind of charming and uplifting song that we’ve come to expect from the Oakland MC.

If you’re bored of all the usual rappers saying the same old thing, stop complaining and start buying music from artists that just haven’t had the luck of the draw. ESAE clearly lacks the label gloss that “Brokelore” was fortunate enough to have, not to mention being almost half the length. But it’s still a thirty-three minute joyride through the mind of a hip hop genius. It’s lean, high on quality control and almost universally superb. Do yourself a favour and take a chance.