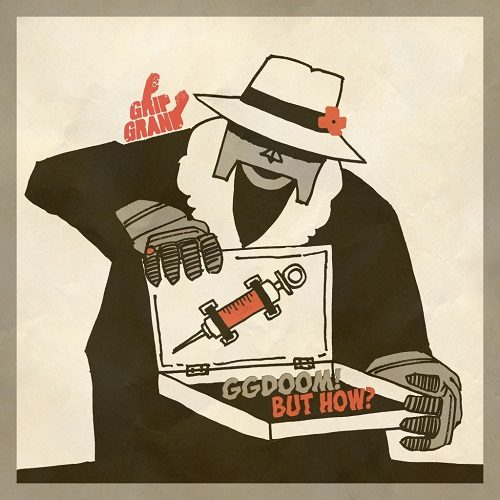 Grip Grand is already an underground favorite going into this newest project, his 2008 “Brokelore” having put his name on the map in a big way, and his sarcastic “Everyone Sucks At Everything” attitude resonating with rap heads fed up with the mediocre mainstream. Basically there’s nothing for GG to prove at this point – except that he can rework another underground favorite into something fresh and new. It may seem like a familiar path to travel, given Jnerio Jarel already went down this road, but that was an official collaboration between JJ and hip-hop’s favorite supervillain. “GG DOOM!” is a little more bootleg, a little more on the down-low, and as such it’s also a little more on the down-LOAD (as in free).

You may ask “Why do an unauthorized DOOM remix album?” But Grip Grand would be just as apt to ask “Why not?” Metal Face has left no shortage of material to work with in his wake over the years, much like Bruce Wayne left no shortage of DNA all over Gotham for Amanda Waller to find. There’s DOOM-capellas to be found (even though he allegedly has asked labels not to ever release any) from all of his numerous solo albums, side projects, collaborations and singles. Any producer of any repute could mix his lyrics and create a Daniel Dumile album – but the mere stature of the man and perhaps the possible permutations of litigious lawyers have kept them at bay. Grip Grand is therefore a bold man with a master plan and no fear of The Villain. He’s willing to take that risk and create a project that even Latveria’s would have to listen to and say “DAMN THAT SHIT WAS DOPE!”

Things get off to a fast start with “But How? (Jesus Pizzas)” and speed along quicker than The Flash on a cocaine bender. Grip flips several different sound styles in one track, going from banging the ivories to an Asian influence to getting trippy with the synths, tying it all up in a bow with drumbeats and scratched in samples. In particular the samples are where Grip really deserves to get his props, because he didn’t just take a Dumile rap and slap a beat on it. Much like the comic book inspired persona that has been manifested on DOOM album skits through sampling cartoons, “turn the page” records and movies, the persona emerges on “Space Salvage” with humours interjections of “HUH” and “WHAT?” which should be familiar to all hip-hop heads. It functions as a song in and of itself, much like “Fillet-O-Rapper” on “MM Food.” The spiritual similarity even leads me to suggest an alternate title: “Poly-Rappers.”

“Gonads” shows a similar understanding of the DOOM sound, and although the vocals are slightly harder to hear here, it’s clear Grip could (and should) be producing tracks for Dumile in an official capacity given how perfectly he flips from the floating flutes to the fast paced and gothic overtone beats, seemingly at the rapper’s request himself. Even though Dumile often crafts his own sonic landscape, as does GG for himself, you’d be hard pressed to guess “Bain de Soleil” wasn’t his own choice. “You can mark it off as Rec on the checklist/wearin gold fronts, can’t afford no necklace.” The best of DOOM’s tracks features a flow that’s half bent, a little slurred, paired with a funky backdrop that somehow both enhances and distracts you from the delivery – “Genie in a Bottle” achieves all of those goals admirably.” The hilarious sample about “dimwitted studio executives” at the end puts it over the top.

If there’s any shame to “GG DOOM! BUT HOW?” it’s that songs like “Jive Turkeys” and “Motherfuckin Villain” clock in at under two minutes long. In fact the entire project is only 18 minutes long total, which is hardly enough given how enjoyable it is to listen to, and how well Grip Grand has blended his beats and samples to Dumile’s vocals. Though there’s a good chance this unauthorized and unofficial track could just piss off the reclusive Metal Face and cause him to send death rays from an orbiting satellite at Grip Grand’s headquarters, one hopes that he can be talked into his sense before pushing that big red button. It may not be official, but “GG DOOM!” should be celebrated as though it was, because in truth it sounds as good as any of DOOM’s own official projects of recent years.