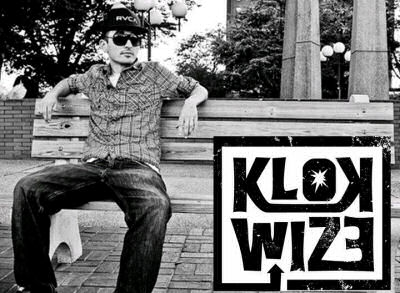 What a person listens to says a lot about them. According to Klokwize, when a person picks up his album, “it’s saying that people can color outside the lines.” Klokwize has been coloring outside the lines for years, crossing genres until he came up with his perfect sound. That sound is something he calls Hood Hippie

, which can be loosely described as A Tribe Called Quest meets Sublime meets Shwayze, led by a gravelly voiced emcee. Hood Hippie

also happens to be the name of Klokwize’s official debut album.

is all about, the very personal nature of his music, and why he decided he needed a band. Klokwize also revealed a career affirming moment that took place in, of all places, his mother’s attic.

Adam Bernard: Start this interview off by telling everyone the best thing people have said about your music.

Klokwize: The best thing that people tell me is that they relate to it, and connect to it, which is weird because a lot of the songs I write are very specific, they’re very personal. I don’t shy away from being honest about my life, so when listeners connect to that, and they want to fight for you, and kind of champion you to their people… I had a girl who told me she plays “Boogyman Blues” every morning, that’s how she starts her day, and I know I have artists that if I start my day off with their music it changes my whole mood. To make that style of music, and see people really connect to it, and apply it, is crazy.

AB: Being that your music is personal, how much would you say we learn about you when we listen to your album, Hood Hippie

K: The album is really super honest, and it has a really clear theme, and there’s a message to it. It’s not 12 random tracks just pieced together, they’re all there to unwrap the story of being self-made, and coming up from not having co-signs, winning over the public, and trying to do things in a more grassroots way. I think that’s really what people learn from the album, you can embrace what’s different about you, and what’s crazy about you, and make that into your calling card.

AB: When did you figure out you were going to embrace what was different, and what was crazy, about you?

K: I’ve been an emcee for probably ten years. I used to tour with DJs and all sorts of stuff, I just kind of hit a ceiling creatively where I didn’t like some of the artists that I was playing with, the environment I was in felt real negative, and it felt very stagnant. Then you see where hip-hop has gone in the last five years and it’s really not a genre I wanted to be in. I didn’t want to feel like I had to be in a competition with the artists that are out that don’t inspire me, so about three years ago I totally swore off rap music and just wanted to make a rock band. I didn’t know anything about it, and it’s been a really crazy, awesome process.

K: Yeah, cuz me as an emcee, I still write songs the same way, and I think our fusion, having the live instruments and having me spittin, even if you do something very simple it’s still got a sophistication to it because it’s a fusion.

AB: How did you develop your sound, and how many horrible failed precursors to it did you have to go through before you got it right?

K: {*laughs*} Honestly, I think a lot of my early career, when I was working with beats, and this is not to say I didn’t have great producers around me, but the types of records I was writing were very intimate. I was making those kinds of records on beats and it didn’t flesh out enough, it didn’t really get a whole sound, it just sounded like somebody that was low key on the beat. With the band it’s a texture, it’s a whole direction.

AB: Was anyone there to guide you, or give you any kind of advice, as you made that transition?

K: I had really good producers on the album. I had two producers who did the whole thing, Jon Abarca and Ray Morant. Ray Morant is an older guy, he’s in his forties and he’s a well known jazz figure, funk figure, he does Black-eyed Sally’s and a lot of those. What he brought to it was the musical sensibility, and keeping it sophisticated for the musicians who hear it that know the difference. Jon’s a real young dude. He just graduated Berklee in Boston. I did a lot of the more commercial format things with him because he brought a real young energy to it. Honestly, I don’t read music. I have a great ear, I hum, and people pick it up, so having those producers around, and the band, has been the whole difference. Some people want to do the whole album themselves. They want to make the piece, rap on it, put it out on their label… you gotta let the reigns go at a certain point.

. What does the phrase Hood Hippie mean to you, and why did you feel it was the perfect name for your official debut?

K: That’s the thing, this being the official debut, I wanted a title that sounds what you’re gonna walk into. The album itself is very much a fusion of the two worlds I grew up in in Connecticut. I have friends who are stock brokers and I have friends who are drug dealers. That’s something not everybody sees, and is kind of unique to where we live.

AB: Speaking of the uniqueness of Connecticut, we still don’t really have a Connecticut sound, do we?

K: That’s what I was shooting for. I feel like we really accomplish at least a Klokwize sound, but I also think it’s very accessible around the world, and if you did grow up anywhere on the East coast, it sounds like that.

, and that’s kind of the theme of it. The first lyric you hear on the album is “this first little level just don’t reach high enough / we dirt poor, still there’s more to see higher up.” That’s really what it’s about; being conscious, being a fighter, and making your backyard better.

AB: What moment, or moments, have stood out to you as a clear indicators that music is what you’re supposed to be doing?

K: All sorts of crazy things. I was actually on a conference call with MTV in my mother’s attic a couple years ago. They had heard about us in three different states. I was sitting there, me and my manager, in my mother’s attic, in a room that looks like a pantry, on the phone with them, which is crazy, and that’s just validation. I had no connections there, no hook ups, that’s really just paying dues, showing up, dropping the videos, making sure the content, the quality, and the professionalism, is there. I think good music like that has legs. It just gets itself where you need to go.

AB: What happened after that phone call?

K: They covered some things and they got some early cuts of our videos. It was before Hood Hippie came out, I was working a five track. At the time I didn’t have the dope singles that I have now. I feel like right now everything’s really clicking.

AB: Other than the attic, where has been the most interesting place music has taken you?

K: I just got to hit the West Coast a month ago. I was doing listening parties and events out there. Just for me being a kid that grew up in Connecticut, I had never jumped across to the West Coast. I was always saying I would wait until music presented itself, and that’s exactly what happened. It was really a big moment to say that music got me here, not some other type of connection. I’m really influenced by the West Coast sound and I wanted to make sure it felt genuine to the people who are out there. The response was crazy.

AB: Finally, speaking of responses, tell me about your greatest fan encounter.

K: I will say it’s wild to me that I have a core group of people that will travel, that cop hotel rooms and drive four hours, and show up the night before, and they know all the songs. There’s like a communal feeling that people get. I think a lot of people at festivals get that. We’ve kind of cultivated that kind of vibe where people have an experience and they want to do it again. It’s weird to get recognized places. That’s the craziest. I was in a Chili’s and this huge dude with dreadlocks followed me from one end of the Chili’s to the other just to be like “yo, you’re that guy, from YouTube.” The guy left his wife at the booth and was following me through the restaurant. At first I thought he was gonna tear my head off or something. I remember being up here in Hartford, I was going in a really shifty apartment building to see a friend. All the hustlers were in front and they were all looking me up and down and I’m like great, they’re gonna try and pull something. Literally, all three of them looked and just said “yo, you’re the white boy from the video,” and they knew the lyrics. You never get used to that. I don’t get recognized every day in the grocery store, but it’s cool to be a recognizable person within my field