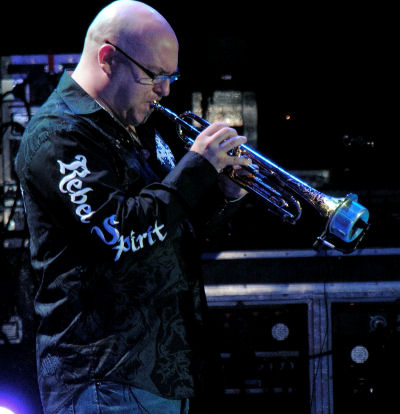 Not everyone reads through album liner notes, but if you’re one of the people that do, you already know that the sounds of Bill Ortiz’s trumpet have graced some of your favorite records. He works and tours with the legendary Carlos Santana. He’s recorded with Tony Toni Tone, TLC, and Destiny’s Child, just to name a few, and his latest album, Highest Wish, features appearances from underground hip-hop heavyweights Casual, The Grouch, and Zumbi from Zion I.

This week, RapReviews caught up with Ortiz to find out more about Highest Wish, how it represents his ideals, and the way in which he feels every form of music he performs is related. Ortiz also told some highly entertaining tour stories, which included revealing the R&B group you should never challenge to a snowball fight.

, and it has a soulful vibe. Even though you play the trumpet, and don’t use your words, what do you think listeners learn about you through your choice of music, and the guests you have on the album?

Bill Ortiz: That’s a good question. As far as the content of the words on the songs, it’s important to me to be an artist that tries to put something positive out there into the consciousness of people. Not to try to come across as being a pontificator, but in music today there’s so much material that’s put out that is pre-fab and very corporate and formulaic, and also the tone of our society’s become very fighting and confrontational and kind of a “trash for cash” approach. I come from a generation where music had a place of social relevance and the people who inspired me were people who used their music as a force of change for the positive. I grew up listening to people like Gil Scott-Heron, Brian Jackson, and Curtis Mayfield, Marvin Gaye, Stevie Wonder, people like that, and also in hip-hop, I started off with KRS-One and Chuck D, people who used music as a platform to express how they viewed the world. That was important to me, so having people (on my album) like Casual, The Grouch, and Zumbi from Zion I, these are people who are very conscious and I feel like they were a great choice to contribute to what I was trying to achieve.

AB: You have worked with everyone from Carlos Santana, to TLC, to Destiny’s Child, to Zion I. What kind of changes do you have to make when you genre-hop like that? Is it a whole different mindset you have to get into?

BO: Actually, to me, all the different types of music that I’ve had the great fortune to be able to play are related. There’s a common thread. I use the analogy of a tree with different branches, so if you’re talking about hip-hop and soul and R&B, and then you’re talking about jazz, and you bring in rock and reggae, there’s a common thread, and it all basically is originally African music. Hip-hop is really just the latest progression of the lineage of R&B. The musical aspect of hip-hop can be traced back to music like James Brown and Horace Silver, Professor Longhair. Having played with Tony Toni Tone I saw firsthand how these younger musicians were influenced by people that I grew up on, people like Donnie Hathaway, Sly and the Family Stone, Earth, Wind and Fire, so it’s basically music that’s built on top of music, which appreciated it. Hopefully all art is like that, there’s a lineage in the growth that it has.

BO: Not at all, because people that are musicians are driven by music, as opposed to people who just want to play music to be on stage and be a star. People who really take music seriously, they’re into it because they’re inspired by it, so they find one artist that they like and it’s like pulling a thread. That will lead you to the person that was influencing them and you just follow that progression. So if you’re really interested in music and learning about it, it just kind of happens on its own. With Tony Toni Tone, those musicians were pretty much gospel musicians who took their vocabulary in gospel and added it to hip-hop and R&B, which is what they were playing. If you listen to the hit “Little Walter,” it’s “Wade on the Water,” which is obviously a gospel tune, it’s an iconic song.

AB: Your first hip-hop experience as a musician was playing on Souls of Mischief’s debut album.

BO: That was my first as far as recording with a major artist. Locally in the Bay Area I played with a lot of hip-hop people and R&B people for years. As a musician your career’s growing, especially if you’re a side person, you find yourself wearing a lot of different hats and doing a lot of different styles of music, so by the time I started working with people like Souls of Mischief I already had a pretty good vocabulary and understanding of the music.

AB: So there was never any point where you were sitting with your trumpet wondering if you were ever going to get to use it in hip-hop, you kind of knew all along that you were a part of it, and making it?

BO: I understand the vocabulary of the music. When I first started playing gigs I was like 16 years old. People usually see a trumpet player and they assume you’re a jazz musician. That is an important part of who I am, but I was actually playing R&B gigs before I was playing jazz, so from someone who was playing funk gigs and R&B gigs from the age 16 on, you’re building your vocabulary, which you add to wherever you’re playing. What I do as an artist is I have my identity and sound as a trumpet player and an improvisor, and on the one hand you try to adapt and fit in with what’s happening, but you also have to respect your own voice and combine the two together.

AB: What’s the most fun you’ve ever had in the studio, or on the road?

BO: When I played the Apollo Theater with Tony Toni Tone that was definitely an honor and a high point, to be able to say you played at the Apollo, with all the great people that have played there before. Playing with Santana, period, is a great experience. There have been a number of times we’ve done concerts at the Montreux Jazz Festival where we were playing on stage with people like Herbie Hancock, Wayne Shorter, Chick Corea, and John McLaughlin, so to be on stage playing with them was a huge honor. These are people that are idols of mine and inspired me to do what I do. As far as fun hijinks, there’s snowball fights on the road. With the Santana band it’s like a family, we’re on the road as much as we are home, so there’s a lot of fun ribbing and joking around, stuff like that.

AB: Who’s the most competitive when it comes to snowball fights?

BO: {*laughs*} We had some pretty ferocious snowball fights with Tony Toni Tone in New York in the winter.

AB: So moral of the story is do not get into a snowball fight with Raphael Saadiq?

BO: Unless you have like a block and a half head start on him. I can tell you another funny thing that happened. I was playing with Carlos a few years ago, we were playing the song “Funky Nassau.” I was playing a solo. I finished playing and I started walking backwards and I tripped and fell over the floor monitor in back of me. Fortunately I wasn’t hurt, but I think the camera guy zoomed in on me, so you just get up and laugh and wave at the crowd.

AB: Ouch! All the tours and collaborations aside, what do you consider the most interesting opportunity music has afforded you?

BO: Being able to see the world. It’s really great to see different cultures and see how we’re alike and how we’re different, to see different audiences everywhere and see that mix of young and old and different nationalities all together. That’s one of the great things about music, it’s a great bridge. This kind of goes back to what I was saying before about using music to be a positive force, one of the things that I have always respected about Carlos Santana is at this point in his life he’s using music as a way to uplift peoples’ consciousness and bring people together. He’s even had a record called Shaman, which means healer. I’ve always admired that with him, that he’s been able to bring certain things to people’s consciousness. He’s raising a lot of money for different charities. It seems like today everybody’s trying to divide people in a way of bringing about a desired result, and it’s nice to be a part of something that tries to combat that.

AB: I know touring can be an exhausting experience, and sometimes booking has you going from one spot to the next practically as soon as a show’s over. Have you had any places where you’ve really been able to explore the culture and spend some time immersing yourself in it?

BO: Oh yeah. One of the most beautiful places I was able to spend some time was Istanbul, which is a beautiful city. Generally, wherever we go there’s fortunately enough time to go out and walk around. If you’re in these places, the last thing I want to do is just see the hotel and the venue. Most of us make a point of really getting out there and trying to walk around and walk through neighborhoods and different parts of town and get a feel of what it’s like.

AB: You also teach music. What do you love about what you see in next generation of musicians?

BO: It’s exciting to see a young student that has that same hunger and passion for it that I had when I started out, and hopefully still have. That’s really exciting, when you see people learn, and develop the hunger to learn more, and just really have a passion for it. I will say that right now there are more good musicians coming up then there have been in a while. I know in San Francisco there are a lot of great young musicians coming up and fortunately they all seem to be able to find work, so I hope that keeps happening because there are some really great young players around now.