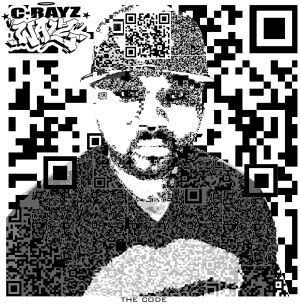 To put a fine point on it right from jump, “Ravipops” is one of those hip-hop albums everybody heard about that most people never bought. It deserves all the accolades and acclaim it got, as Walz was already ahead of his time when it dropped in 2003, which means hip-hop probably just caught up about 5 minutes ago. The boom for independent labels going underground gold was in the late 1990’s though, and Def Jux is to hip-hop like Ring of Honor is to pro wrestling. If that doesn’t make sense, it boils down to being able to sign the best in the world, then not be able to market or promote them like it. The underground fans will support it and the world will ignore it. C-Rayz Walz is CM Punk, only he didn’t get discovered by WWE (Def Jam)… yet.

Walz has kept hustling despite the handicaps, dropping albums like “Chorus Rhyme” and “Freestyle vs. Written” over the years, and getting a mixture of praise and indifference for each one. The buzz he had in the early 2000’s is gone though, and record labels have increasingly given up on the idea of signing anybody who doesn’t sound like the next Kanye West or Gucci Mane. What’s a talented and underserved emcee to do in such an environment? Bandcamp. If ever a better purpose for the site has been invented than for a rapper like C-Rayz Walz to direct market to his fanbase, I can’t think of it. This is not a bedroom emcee with his GarageBand app working overtime – this is a real legit spitter straight from The Bronx. Furthermore C-Rayz was up on this technology shit from day one, as he’s quick to point out on “The Digi-Box,” a song that also shouts out almost every digital site to support or review him over the past decade:

Thanks for the shout Walz, much love. Thankfully it’s easy to give love back and not feel biased, because Walz made sure to pack “The Code” with more than graphics you can scan on your celly. Beats pound hard like the boom bap of old, with scratches and samples you can feel sprinkled in like adding the garlic and pepper to your pasta sauce. Flavorful? Hell yes. The self-titled “CRAZY” featuring Rebel Diaz has a haunting backing harmony heavy ground and pound thanks to G1. If if was “The FIF” then DJ Smoke clearly wanted us all to get drunk. I could put this beat on loop and just listen to it for days – it’s Primo meets Pete Rock and pure hip-hop. “Peroxide” burns like the name thanks to Sean One, and Walz proclaims himself the fix (get it) for rap in 2012 on the rhymes:

“Mackadocious, my rap ferocious
Livin in the projects, with rats and roaches
The theme’s over when you fiend for culture
But ain’t seen mean green since I steam cleaned okra
I hope to leave the underground in overdose exposure
Nearsighted, now everything seems closer
But I don’t wanna be a star! I might supernova
Gunnin these bars; you lookin for change? Check the sofa
And I heard you doin hip-hop too {*laughs*}
Too bad it’s not doing you!”

“The Code” embraces a 2012 technological era of hip-hop, but it’s a “Ravipops” throwback in the best possible way, and as he says on “Peroxide” he’s only relaxed “like N.W.A takin it easy” and just like a referee “the game needs me.” For some people that would be excessive self-braggartry, but after hearing back-to-basics skills oriented songs like “Pass By Me” and “Children” (which lambasts the pervasive ignorance of rap with “what you call success, is your children’s defeat”) you can’t help but agree with him. This “Code” is DaVinci – it’s a secret that’s been kept hidden for far too long and needs to be exposed to the world.