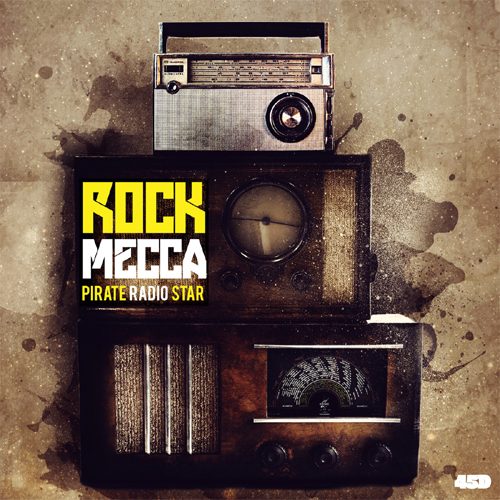 Queens, NYC rapper Rock Mecca has been a staple of the RR newsfeed since 2011. We’ve gotten enough of his singles and videos in that time that I’ve actually memorized his The Hip-Hop Shop when I heard something I liked. Rock Mecca was already off to a good start before I hit play on “Pirate Radio Star,” and then he pleasantly surprised me again by having an intro/skit that I not only didn’t hate but replayed a second time. It doesn’t hurt that Rock and his producer sampled from a reggae classic – “Pirates Anthem” from Home T, Cocoa Tea and Shabba Ranks. You may not know you know it but old school hip-hop heads have heard this line before: “JUST BECAUSE WE PLAY WHAT THE PEOPLE WANT.”

This turns out to be a recurring theme for “Pirate Star Radio,” as Rock Mecca fashions himself a Rastafari rebel illegally broadcasting his hip-hop music to the masses without FCC permission. Snippets from movies and TV shows play up this persona, while Rock describes himself as what you get “when an angel gets pregnant by The Devil – a rebel on another level” on songs like the Ralph Ellison inspired “Invisible Man Radio.”

“I’m just a voice, no face, no name, no place
No fame, appearin live before you then disappear without a clue
No trace, nowhere in cyberspace
No blogs with comment sections or squad, no clique to rep with
No videos, no pictures, no sob story, no fiction
No fables, no countdowns on cable, no label can sign me
I sign off broadcasting live but can’t find me
Cause I’m gone – won’t catch me alive”

Not many rappers have the cajones to brand themselves a cross between “Doctor Who, Doctor Doom (and) Doctor Strange” because they’re afraid to sound like a nerd, but Mecca sounds like the hardest of Rocks when he does so. In fact he’s so irie that he takes the same sample Kanye West used on “Mercy” and does it better – the intro from Super Beagle’s “Dust a Sound Boy.” Once again if you’re old enough you probably knew the line before reading this review: “It is a weepin’ and a moanin’ and a gnashin’ of teeth” et cetera. It sounds good on both songs, but on Rock Mecca’s “Champion Sound” it fits naturally with his reggae inspied style an’ sound.

Unfortunately I’m sharing clips of the artists who influenced Rock Mecca instead of the man himself, because for some reason nobody has gotten around to pirating the “Pirate Radio Star” to YouTube. One song can be found though – one that samples from “Juice” starring Tupac Shakur – the anthemic “Top of the World.” Really feeling Rock Mecca’s flow on this one – sounding like the other Queens rappers to come before him yet still distinctive enough lyrically to keep me tuned in as something type fresh.

“Alive on arrival I marvel, my rivals is sick
I book like a novel and ball like a lottery pick
Don’t live for tomorrow or borrow, the future is now
The price of your spot, all the haters is wonderin how
The toast of the town, the straw that stirs the drink
Expensive loafers, chauffeurs, furs and minks”

If I had to pin down his flow, I’d call it a cross between the lisp of Kool G. Rap and the octave of Cormega, taking the distinctive characteristics of both without becoming a rip-off of either one. Although he’s got the swagger of a street entrepeneur, he’s also got the intellect of a hustler turned CEO like Jay-Z. Sounds like “The Razor’s Edge” show that he’s not endorsing a criminal lifestyle that leads to “playing double dutch with a crutch” – he’s just showing you what that life like from his first hand view on the frontlines, then letting you make your own judgments.

Rock Mecca shows an impressive breadth of pop culture throughout “Pirate Radio Star,” as songs by turn sample “Taxi Driver” (on “New York Noise”) and “Mean Streets” (on “Cooler Heads Prevail”) but no matter how many different eras of film are represented, it’s the cinematic flow of Mecca over these grimy beats that holds the whole visual together. It does feel like it comes full circle though when the final track “Rumble Young Man Rumble” opens with Tupac Shakur again, whose voice of the young angry disenfranchised rebel still haunts hip-hop over 15 years after his death. Hopefully it’s not in any way prophetic for Mecca. He may be a “Pirate Rado Star” but his broadcast needs FCC approval. If not, he needs to keep on polluting the airwaves. Don’t shut him up.