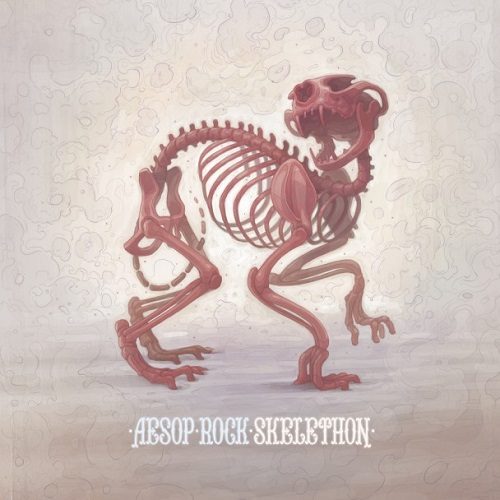 In the interest of full disclosure, I have to admit that this is the first Aesop Rock album I’ve ever listened to. I know he’s from my hometown, I know he’s been making records since the late nineties, and I know critics love him. I’m a fan of his old production partner Blockhead, and I’m a fan of his old label Definitive Jux and his current label Rhymesayers. I’ve even heard him featured on countless rap albums, lending his distinct voice to tracks by everyone from Percee P to Blueprint to El-P to Atmosphere to Illogic to Tame One. I’ve heard of Aesop Rock and I’ve heard Aesop Rock. So why have I never bothered to actually listen to his music?

The fact is Aesop Rock makes intimidating music. His raps are quick and dense, full of convoluted wordplay and references. He favors beats that are loud and disquieting. This isn’t music to rock the party, get a club jumping, or provide a soundtrack for Friday night. Aesop’s music is paranoid, insular, and unnerving. If your stereotypical rap party is a bunch of dudes in designer clothes smoking weed and drinking cognac with half-naked models in the VIP section of a swank club, “Skelethon” is two grad students on Ritalin chattering competing conspiracy theories in the kitchen of a dilapidated flat. Listening to his music is like reading a William Faulkner novel – you need CliffsNotes to understand what is going on. Those hesitations aside, I picked up his latest hoping to finally understand what the man is all about.

Let’s cut to the chase: Aesop Rock really is as good as all of the critics make him out to be. Few MCs can spit rhymes as intricate dense as Aesop. Even El-P, who probably comes closest to Aesop’s style, seems as simple as Flo Rida when compared to Aesop.

Take for example “ZZZ Top.” The lyrics read more like prose than rap, yet he manages to make all the words fit together like verbal Tetris:

“Somebody in a cultivated moment of distress
Composed themselves enough to artfully carve ‘Zoso’ in this desk
They was probably thinking “Fuck you, fuck you, fuck you” in they head
With a hell bound arm in a acidy wash
Homemade curfew a thousand o’clock and the pot leaf tattoo his friend did drunk
Like a badge of mystique though it technically sucked
Taking the name of the father in vein on the way to the blade in his locker
Estranged, a switch he’d lifted from a sibling’s skivvy drawer
Who’d branched off into ninja stars, and never his shit was sharked to
Here with a higher purpose
In the primal urge of juvenile berserkers
Like Crocea Mors in a arcade drop claw gouging a valentine for Miss Othmar
Watch, capital “zed”, slowly maneuver the “o”
“S” is the most difficult to control
Finally “o”, into the eye of the goliath you go
That levy crushin’ percussion’ll pull the monkey upright
12 or ghetto blaster, black or technicolor telecaster
Lecture at a faster rate than class was making him develop”

There’s a downside to Aesop’s cleverness, though. I lifted those lyrics directly from his website because there is no way I was going to try to transcribe the torrent of words that comes out of his mouth. Especially when he’s using words like “Crocea Mors,” which according to Wikipedia is the name given to Julius Caesar’s sword. I realize I complain a lot on RapReviews about how dumbed down so many hip-hop lyrics are, but Aesop Rock has the opposite problem. He’s a little like the Dennis Miller of hip-hop – spitting so many obscure references that the audience can’t help but miss most of them.

There is also the matter of Aesop Rock’s voice. It’s an acquired taste. He raps in a constipated flow as if he is eternally holding in a big hit of weed. His voice has turned me off in the past, but much like E-40 or B-Real’s flow, you get used to it. I may never learn to love his voice, but I can live with it.

There is a big upside to Aesop Rock’s challenging verbosity that makes up for the funcrushed vibe and obscure references. “Skelethon” is one of the smartest and most rewarding albums I’ve heard in a while, rivaled only by El-P and Killer Mike’s recent work. Listening to Aesop Rock rhyme is like taking a master class in how to be an emcee: Danny Brown has said that he learned to rap by studying Aesop Rock’s rhymes. The songs are riddles that you untangle a little bit more with each listen.

If you need proof of the man’s brilliance, listen to “Ruby ’81.” It’s a filler track of sorts, a brief, cinematic description of a young girl who gets out of her crib on Fourth of July while her parents are busy partying and ends up face down in the pool. Aesop builds cinematic tension describing how Ruby gets away, and just when you are sure that the story ends tragically, the family dog saves the day. Aesop paints these pictures with a poet’s skill, describing the scene and the drama.

The sometimes somber and deep mood of the album is lightened by Aesop Rock’s twisted sense of humor. “Homemade Mummy” describes mummifying the family cat; “Racing Stripes” is about bad homemade haircuts; “Grace” starts off with a boy wishing “Dear God Thanks/And if you loved me vegetables would be extinct.” There is a wave of nostalgia throughout the album, with Aesop capturing vignettes from his own childhood and high school days.

On top of the rhymes, the record sounds great. It is the first record that Aesop has produced totally on his own, and he constructs a mix of live instruments and samples to match his rhymes. All of the beats are backed in solid, heavy drums. “ZZZ Top” is built around a drum solo, and many of the other songs feature live drums. There is a sameness to some of the songs, as he tends to lean heavily on ominous synthesizers, but he does mix it up.”Fryerstarter” combines xylophone with electro shocks, and “Cycles of Gehenna” samples what sounds like a Chinese song. “Grace” sounds like the White Stripes given the boom-bap treatment.

I’ve mentioned El-P already in this review. It’s hard to write about Aesop Rock and not think about his former label mate. Both MCs came up in the late nineties and helped blaze a trail for both indie rap and white MCs. El-P and Aesop Rock showed how white rappers could make authentic, good hip-hop without trying to sound like they were from Marcy Projects. Both released new albums this year after a five-year hiatus, both self-produced their albums, both are mourning the loss of Camu Tao, and both have some relationship issues they are dealing with. Their production style is fairly similar, although El-P is the more accomplished producer. However, there is none of El-P’s b-boy posturing or battle rap roots in Aesop Rock’s rhymes. He has a collaboration with folk artist Kimya Dawson coming out soon (she appears on “Skelethon,”), and those folk musical influences show up on the album. Aesop Rock seems less grounded in hip-hop than El-P, and the result is an album that is more eclectic than “Cancer 4 Cure.”

Given my ignorance of Aesop’s body of work, I can’t comment on how this album fits into his discography or how it compares against his earlier albums. I can say that “Skelethon” won me over to Team Aesop Rock. However challenging or confusing his rhymes can be, the songs still work with their combination of banging beats, rich lyricism, and twisted humor. Aesop Rock is pushing the boundaries of hip-hop and making other MCs step their game up.