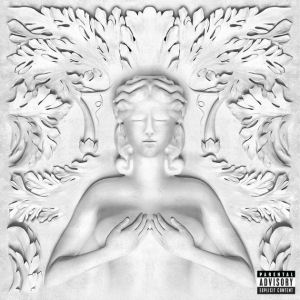 “It’s a cruel (cruel) cruel summer, leaving me here on my own.” No? Well for a child of the 1980’s, the words “Cruel Summer” will always bring Bananarama to mind first. If Kanye West’s G.O.O.D. Music compilation takes off, then “Cruel Summer” will evoke memories of 2012 for a whole new generation, and it won’t even matter if they’ve seen his movie of the same name (starring Kid Cudi) or not. Curiously there’s no song by that name featured in either one, but there’s no shortage of cruelty found on songs like his hit “Mercy.” A trio of emcees join Kanyeezy to express the heights of materialism the song is named after – the expensive Lamborghini MurciÃ©lago car:

Big Sean: “Finally got paid, now I need shade and a vacay
(And niggaz still hatin) So much hate I need an AK
Now we out in Paris, yeah I’m Perrier’n
White girls politickin – that’s that Sarah Palin”

2 Chainz: “Spit rounds like the gun range, beat it up like Rampage
Hundred bands, cut your girl, now yo’ girl need a Band-Aid
Grade A, A-1, chain the color of Akon
Black diamonds, backpack rhymin, co-signin by Louis Vuitton”

When it comes to conspicous consumption though, none can top Kanye.

“I threw suicides on the private jet
You know what that mean? I’m +fly to death+
I step in Def Jam building like I’m the shit
Tell ’em give me fifty million or I’ma quit
Most rappers’ taste level ain’t at my waist level
Turn up the bass ’til it’s up in yo’ face level
Don’t do no press but, I get the most press kid
Plus yo my bitch make yo’ bitch look like Precious”

On one hand you have to admire the sheer hubris of Kanye and comrades one-percenting like only they can, or at the very least, like only he can while the rest are spending out of their advance. (Watch for that rebound on the recoup Chainz, it’s gonna hurt like ground and pound from Rampage.) And as long as we’re being fair, that beat by Lifted et al is hypnotic as is the Super Beagle chatter of the chorus. The flipside of that coin is that Kanye seems increasingly out of touch with the very consumers that are buying his music. He’s always been gassed off his own ego, but with the stack of greenbacks he’s standing on these days, any liftoff from that point will take him far beyond stratospheric heights. He’s probably 30 miles up now.

If the goal of Kanye’s album was to flaunt the Benjamins he and his crew burn to light their cigars, there’s no doubt “Cruel Summer” will feel like cruelty to anybody scraping two nickels together between thumb and forefinger. Pusha T’s “I wouldn’t piss on that nigga with Grand Marnier” on “New God Flow” epitomizes their excess excellently. At some point I expected West to rap about using Sevruga caviar as eye black to play flag football, swimming in bathtubs filled with Dom Perignon, and wiping his ass with original drafts of the Constitution. I imagine on one good night of partying, he spends more than I made in the last two years and doesn’t even miss it. He never tones it down – on songs like “Cold” he only takes it to ever more braggadocious heights.with

SRSLY ‘YE WE GET IT. Congratulations. You can buy and sell every person on Earth ten times over. I’m sure you can put out more hits than the Guild of Calamitous Intent too – so much they probably give you a frequent buyer’s discount. If you don’t get the reference, I’m not going to make you look it up to get it, because the point is that it’s now a cartoon. He’s exceeded the bounds of believability that even he had previously set. It’s like the old story that if you tell your son if he behaves badly that you’ll spank him, he believes you; if you tell him you’ll hit him so hard that he flies over the moon he no longer fears you because you stepped all the way beyond credibility into absurdity. The words of any critic like me may be “too stupid” to effect the oh-so-intelligent Mr. West, but since he’s already become a walking talking cartoon I don’t have any reason to fear the repercussions of criticizing him.

There are a few moments on “Cruel Summer” where believability actually shines through. Kid Cudi’s “Creepers” sounds like anything he would have done on an album of his own, which to some degree makes it out of place on this compilation – but still appreciated all the same. “If I had one wish it’d be to have more wishes” is the kind of sentiment I can actually relate to. “To the World” embraces its own absurdity to a degree I can appreciate with R. Kelly proudly crooning “The whole world is a couch; bitch I’m Rick James tonight.” If it’s a cartoon, at least let it be a funny one, ya heard? And on that note the version of “New God Flow” found on this album exceeds the original simply by having Ghostface Killah add another verse. Kanye could take a few tips from him about how to be flossy without coming across as so arrogant and unlikeable.

The biggest fault of “Cruel Summer” may be that it lacks a unifying voice or vision. One might be inclined to forgive that by saying since it’s a showcase of Kanye’s imprint G.O.O.D. Music, it has to feature all of the artists who are associated with it. John Legend and Teyana Taylor’s “Bliss” doesn’t fit though, in terms of either its sappy sentiment or the 80’s inspired R&B funk of Hudson Hawke, who can actually get away with punctuating his backdrop via the sound of a screaming eagle – I like it. Most of the time people get sucked into the vortex swirling around West though, to the point talented crooners like Marsha Ambrosious are singing “got a pistol on my hip/and it’s gon’ be some shit” on “The One.” Is that really the best use for her? In fact do the cameos by Common, Raekwon, Jadakiss or even God-blessed Ma$e represent the best use of their talents? No. West’s true crime is not that he flaunts his excesses on “Cruel Summer” because that’s the Kanye we know and respect, love him or hate him. His crime is that with all the talent at his fingertips, he can’t think of anything better to do than brag on his dick size.