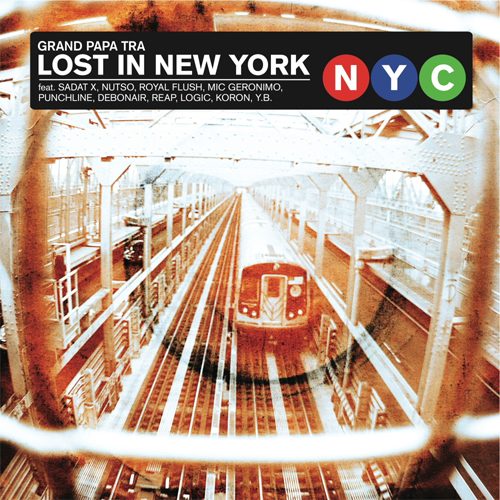 Mos Def taught us that hip-hop is not “some giant living in the hillside coming down to visit the townspeople.” His statement was a product of the great ’90s debates about what is hip-hop and what is not hip-hop, and by rearranging the question slightly – what hip-hop is and what it’s not -, he provided us with a much needed reality check. “We are hip-hop,” Mos continued, “Me, you, everybody, we are hip-hop. So hip-hop is going where we going. So the next time you ask yourself where hip-hop is going, ask yourself: Where am I going?” All this holds true as well for New York hip-hop, this monument that to some people seems untouchable in every sense of the word. New York City still stands, and everybody who wants to contribute to its hip-hop history is free to do so. Grand Papa Tra, a francophone Swiss beatmaker, understands that, and so he set off for NY to make a rap platter, not a merely nostalgic one but one that reflects his intake of and his take on the culture.

If the opening title track is day one, he arrives on a cloudy day, the sky overcast with moaning and weeping instrumental fragments. But New York weather can change quickly, and it instantly clears up with Sadat X’s “Gotham City.” Tra creates an open space with clear, reverbrating tones and light-footed drums as the Bronx MC plays tour guide:

“In the Apple you can find a line if you a digger
If not, you gon’ stay a broke nigga
Understand that
New York demand that
We don’t raise lames
This definitely ain’t the place
for playin’ ’em games
Take yours
We got the hardest gun laws
expandin’ jail population
New York’s its own nation
[…]
Me, I go a little bit back
like the invention of crack
The Rooftop was packed
It was a whole lotta bosses
Dave Dinkins was the mayor
Rudy came and ain’t played fair
A lotta dudes was outta here
Zipped to the mountain air
Some just came home this year”

Speaking of returning absentees, Royal Flush and Mic Geronimo arrive from ’90s Queens in a “Space Ship,” trading quick bars over a beat that sounds like a summer jam dressing up for winter with thick layers of bass. A quite a different, classical kind of bass drives the instrumental track “New York, New York,” capturing the ever busy biorhythm of the City That Never Sleeps with the means of jazz hop.

An ill swinging organ is the centerpiece of “Hip Hop Is Back.” The Tony Montana impression at the beginning is unnecessary and there’s a hint of a lyrical concept that’s not really followed through, but even so experienced mic slingers Nutso and Punchline are on point, the former (reluctantly, perhaps) yielding to those New Yorker newcomers who have begun to look for inspiration elsewhere: “Where is Hip-Hop? I put H.E.R. on the guest list / I heard she on that lean, moved to Bun B in Texas.” Rhyming, “Let me unfold the truth / Jail cells the size of a photo booth / for niggas aimin’ they Canons like a photo shoot / sellin’ a substance that’s uncontrollable / I inhale and spit bars that’s quotable,” Punch shines on “Cold World,” also featuring Sadat and Nutso, bare-bone drums and a rumbling bass. Also part of the “Hip Hop Is Back” line-up, DebOnAir’s time to shine comes on “1 of a Kind.” Tra laces her with bouncy but buff drum salvos as she takes the opportunity to make a strong first impression on the solo tip:

“Some say DebOnAir was born to rap
Well, I support that
To be exact, let’s back that theory with a fact
That kickin’ is what I did
to the rhythm of my mother’s heartbeat
up in her rib, till she put me in a crib
There I listened to my uncle playin’ bongos
And I heard my brother’s guitar combos
the soothin’ sound of my parents singin’ harmos
What other path would I take with those role models?”

The last vocal track, “Let’s Ride” with Logic and Koron, a monotone excercise in late ’90s murkiness, falls short of the album’s standards. But the remaining instrumental interludes, “The Map” and “Last Stop,” make up for it. At 10 tracks and 32 minutes, “Lost in New York” is short and to the point. It isn’t the most brilliant piece of hip-hop music but it compares favorably to the more recent work of some NY reps who helped build the city’s rep. What they could learn from Grand Papa Tra is how to breathe life into beats with minimal means, a true hip-hop virtue, anywhere.