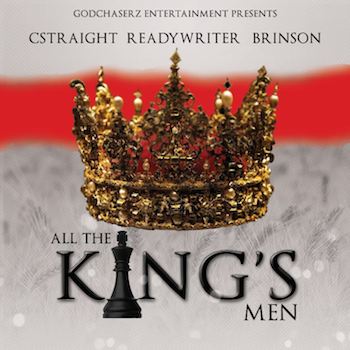 All the King’s Men is a new rap collective consisting ofBrinson,CStraight andReadywriter. None of the rappers are new to each other – they are all members of the Christian rap label Godchaserz Entertainmentand have collaborated or cameod on each other’s projects to date. The Godchaserz focus on spirituality centered rap is more singular than most Christian rappers or labels.

To be fair that’s not to say artists like Lecrae are giving less praise, but that the increasing crossover success he and similar artist like Trip Lee enjoy is due to giving their hip-hop broad commercial appeal – music you can dance to when you’re NOT at a church function. If that sounds like a knock on the label and you’re feeling froggy you can jump on it, but in truth I admire the Godchaserz dedication to their message. The group track “Chase God Music” summarizes their position perfectly – we’re on a mission, and if you want to join us you can “chase God too.”

The beat is on this track is bit too simplistic to really hit, although they do try to broaden their message with pop culture references: “I’m Goldberg, I’m Lesnar, I’m Rock back, hundred stacks – can’t buy you in… only one name, gon’ get you in, J-E-S-U-S, THE END.” At least they’re trying. (Daniel Bryan, Roman Reigns or Dean Ambrose would be a little more contemporary though.) The wrestling references get even deeper on “Figure Four,” which is a reference to the famous submission move of ‘Nature Boy’ Ric Flair, implying in this case that the entire universe is under God’s thumb and he “got it on lock.” Oatmeal shares bars with Brinson on this one:

Even though the album is presented collectively, a lot of the tracks on “All the King’s Men” are for practical purposes solo joints. This is fine given that these rappers all have the same purpose and lean toward the same goal, so putting all three on a cut can feel a bit like overkill – one at a time they come a little fresher. A perfect example of this is CStraight’s solo track “Still Want It,” which feels like more of a personal statement about his desire to be Godly, as opposed to a blatant push to convert non-believers. It seems at times he doubts his faith is worthy of the Lord.

Chill C. If there is a God, I’m sure you are devoted enough to be worthy. In fact I think that’s true of every rapper on the Godchasers imprint – I’ve never had any reason to doubt that they are devout. While I appreciate the throwback NES reference of a track like “Cheat Code,” I think it might be a stretch to say that getting thirty extra lives is equivalent to being “saved” by God’s grace. That’s the one thing that’s hard to get around about All the King’s Men individually or collectively – they sometimes seem to be trying a little TOO hard to show their love. Ironically it’s much like the reference to “blowing in the cart” in the song – that’s a perfect example of trying too hard to make something work. Blowing in your cartridges might seem to make them playable again, but that’s only because your saliva is bridging the contact between the pins and the game – and actually rusting the pins out in the long run. You’d be better off cleaning them with rubbing alcohol and a gentle swab (take it from a collector who knows). I like AKTM individually but on this album they are just too pushy for most casual listeners.