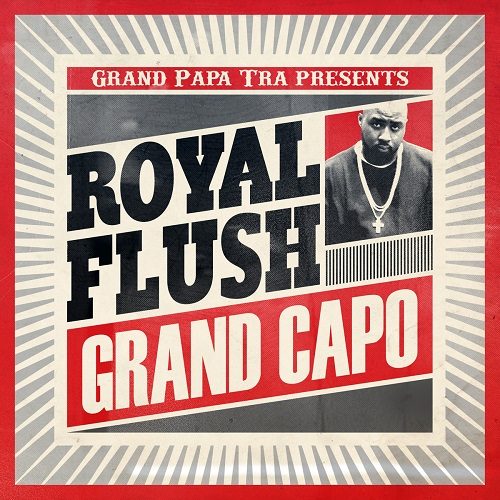 Having tracked him down a couple of years ago for his “Lost in New York” project, backpack traveler Grand Papa Tra reconnects with Flushing, Queens’ own Royal Flush, who still has a couple of signature NY tunes under his belt, namely “Iced Down Medallions” and “Worldwide.” Besides these mid-’90s artefacts, he hasn’t done much to build something that you might call a rap career. Appearing on the radar in eight-year intervals could create a certain mystique, but absences that long have hurt much greater MC’s. Evidence points towards Royal Flush being a rapper for one season, the time when “Ghetto Millionaire” dropped when Queens could do no wrong.

So this is not a case of, to say it with Shawn Carter, us wanting to know if he still got it. No one expects the man to repeat his very moderate success from almost twenty years ago. The crucial question is what coaxed Royal Flush into recording another one of his rare full-lengths? I’ll go out on a limb here and say it was the quality of Grand Papa Tra’s beats and the rapper’s own love for the artform. Yet as ideal as such a configuration sounds, it doesn’t guarantee a satisfying album. If you’re the sole producer in charge, you need to take command and make decisions like turning down some guest requests or cutting nerve-wrecking choruses off. Something is wrong when a hip-hop fan finds himself distracted by rappers when trying to enjoy a track, instead of being witness to them rating the beat just as highly by turning in a stellar performance. It ocurrs on “Grand Capo” that the cinematic dimension of the music is ignored (“MFM,” “Stayin Alive”), or that, when it does inspire a track, there’s a good chance you’ll be witness to an overacted back-and-forth like the one between Flush and Pop Severe on “This Is Killing Everyone.”

Thankfully they do get it right on other occasions. “Beasting” with its orchestral percussion sounds like an M-Phazes track and even has the Sean Price feature to match. “Shadow of the Streets” is an astounding example of vivid acoustics as the absence of drums renders the track more thrilling, its halting pace not only highlighting one of Tra’s trademarks as a beatmaker but also acting as an audio equivalent of the cautious moves one makes in uncertain territory. Guest Illa Ghee is an unremarkable rapper but his hook and especially the line “I’m the part of New York that you don’t see” become the centerpiece of a highly visual tune that virtually stands for what the Swiss producer is looking for in New York. Giuliani and Bloomberg may have cleaned the city up, but you can still count on rap music to highlight the unseen.

Still it’s unlikely that Royal Flush will play any role in saving old ideals betrayed by those who came after him. And the younger voices that he brings along certainly won’t be part of a New York renaissance, despite the expected jabs at mainstream rap, from Atlas’ “Your jeans got tighter – and the bars got weaker” to Pop Severe’s “There’s nothin’ cuter than these rappers callin’ themselves Future / They got the nerve to wear girlie colors like fuchsia.” Nevertheless, discontent with the current rap scene has always been a motivation for comebacks, and it’s no different for Flush, who himself is quite apparently out of sorts with the rap industry:

“I ain’t sell many records in this game, but I ate
And I can spit a thousand bars, bail or jail upstate
When they ask me ’bout hip-hop, I lost faith
Cause y’all niggas spittin’ nowadays sound shitty
So this is what we bangin’ to? Really?
Muthafuckas dancin’ round lookin’ silly?”

Lyrically “Grand Capo” is a typical album at the intersection of hustling, the hood and hip-hop. One song is even called “HipHop,” a grungy and crunchy tune featuring Grand Papa Tra affiliate and native Parisian Nokti (making it a rare bilingual collabo on a New York album). The gospel-tinged “Autobiography” manages to be sensible without becoming sentimental and joins the standout tracks “Shadow of the Streets” and “Beasting.” More typical in tone are the rowdy Nutso duet “Flushtown” (where Tra works a brief “Worldwide” sample into the chorus) and “Sucka Free,” where with a gritty vocal tone and clear diction Flush holds his own alongside Lil Fame, Illa Ghee and Meyhem Lauren. The violin at the end of “Sucka Free” is one of those elements that distinguish Tra from other sampling practitioners. He’s taking care of the boom and the bap alright with strong drums and tight arrangements, but he also disperses these free elements that float around and refracture the rigid sound structure. In that regard he’s probably more true to ’90s hip-hop and its many variants than a lot of his retro contemporaries. Whether it’s the subtle swing of tracks like “Evil Spirit” and “Hoodness Pt. 2,” the jazzy, lifted vibe of “Keep it Live,” the lucent, meditative mood of “Swarm Music,” or “This Is Killing Everyone”‘s disparate elements joining in harmony, there’s evident craftmanship at work.

As mentioned, the major shortcomings are on the vocal side (including the “Ol’ Dirty Intro,” which is irritating on a number of levels). Flush is such a basic rapper that it’s easy to overlook the instances he puts some effort into it, be it flow variation or occasional wit. Either way, as a throwback to the old standard of the simultaneously boastful and repentant hustler, Royal Flush brings a bit of authenticity to the current scene with “Grand Capo.” His ‘legend’ claims are largely unsubstantiated, but his unfazed flow transports childhood memories and strong-arm lyricism equally well. Not every ’90s alum would sound as solid as Royal Flush does on this spontaneous album, and that simply means that he possesses enough rap substance to last him long past his heyday. It’s not always openly displayed, but it’s there nevertheless.