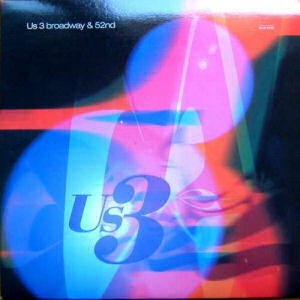 Hip-Hop has always been reverent of jazz, yet oftentimes rap producers use jazz sampling as mere means to a new end. The masters from Pete Rock to Buckwild to Madlib thrive on breathing new life into dusty samples, making them fresh if not unrecognizable from their source material.

There has always been a group of rappers and producers from the other side of the pond, though, that takes their jazz a little more seriously. Guru exposed MC Solaar, among the first of the jazz-obsessed European artists to make waves in the U.S., on his groundbreaking “Jazzmatazz” album in 1993, and more recently entities such as Jazz Liberatorz have captured ears by keeping their jazz pure and mostly unadulterated despite the presence of hip hop percussion and rap vocals.

Us3 was never really a group so much as a rotating stable of contributors to British producer Geoff Wilkinson’s vision, and after the runaway success of their 1993 debut LP “Hand on the Torch,” spurred by the inescapable Herbie Hancock-sampling “Cantaloop (Flip Fantasia),” they toured extensively but never fully reassembled in the studio. On the full-length 1997 follow-up “Broadway & 52nd,” the formula remains largely the sameâ€”like on “Jazzmatazz,” sampling and live instrumentation are synthesized with a hip hop blueprint that manages to balance both genres pretty seamlessly. As many groups have displayed over the years, jazz and rap are natural complements, and Wilkinson goes easy on the bass and sub-rattling percussion of his peers in order to emphasize the raw elements of jazz.

Wilkinson also had the great fortune of a green light to excavate the entire Blue Note catalog, essentially the wet dream of any hip hop producer. Others who raided Blue Note records had to do it carefully, sneakily, or chancily, and the iconic label’s blessing is half the pleasure of the early Us3 albums. Still, Wilkinson’s use of the samples is consistently brilliant, and the live soloing and vocals blended amongst the sometimes familiar yet still fresh samples makes for a reliable pleasure on each track. The lively opener “Come on Everybody (Get Down)” and the lush “Caught Up in a Struggle” are sonic delights, with rich horn arrangements, extensive soloing, and an impeccable vocal balance. “I’m Thinking About Your Body” is smooth and tasteful, whereas the vibesy “True to the Game” percolates on a stand-up bass but also marks the first case of the lyrics coming up short as the MC sleepwalks over the fat groove.

New Yorkers KCB and Shabaam Sahdeeq handle the microphone duties on “Broadway & 52nd,” and quite frankly that’s where the album’s problems lie. Apparently common wisdom suggested that anybody rapping over jazz breaks should be a cooled-out hep cat on the Digable Planets tip, which makes their performances forcibly derivative and easily dated. They kick the righteous talk and refer to women as “queens” because it was cool; they play the enlightened brothers because that was more or less expected:

“Sisters and brothers, where’s the love of one another?
Discovering others of us dumber, prejudice to color
Of creed and religion, driven hate within innocent children
Stop the killin’, instill goodwill, we all be chillin’
Buildin’, then seal it, surrealist revealin’
Since the wheel hit, hearts conceal it
When death hits other men, how many feel it?”

None of it masks the pedestrian nature of the lyrics themselves, and at times it’s such a weak, empty imitation of earlier jazz-rap that it borders on parody. While the music exhibits a sleek, timeless urbanity, the raps place it squarely in the mid-90sâ€”a conundrum resulting in the unintentional irony of “Sheep,” where Shabaam kicks three verses of spoken-word about not being “down with the herd.” “Doin’ a Crime” is a corny cautionary street tale with nothing to bring it close to home, and the call for peace “Recognise and Realise” is trite even by ’97 standards. The instrumental “Hymn for Her” brings it all home, though, with an excellent closer.

Us3’s sophomore effort is an often gorgeous hip hop hybrid the likes of which, unfortunately, we don’t see enough anymore (although Us3 is still doing their thing!). While the rapping members don’t always hold up their end of the bargain, that’s not really the point, and “Broadway & 52nd” is an hour of head-nodding goodness that’s better than this site’s numerical ratings reflect.