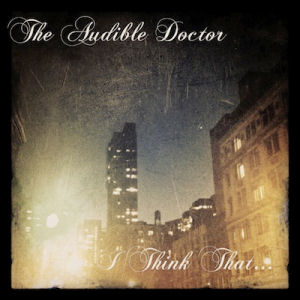 Audible Doctor :: I Think That..

You already know. At least I think you do. Don’t you? Audible Doctor is type ill on the instrumental. The long-time affiliate of the Fat Beats formed fam called Brown Bag AllStars has spent the last two years simultaneously increasing his wallet AND his reputation as the go-to guy when you need a banger for your album. There may be more famous producers who demand a bigger check for their throaway loops, but when you call the Doctor to perform surgery, you’re going to get twice as nice for half the price.

Quiet as kept though Audible Doctor has been getting his Dr. Dre on though, and by that I mean he’s stepping from behind the boards to take the mic and showcase his rhymes. “I Think That…” is him playing a larger role on his own beats, moreso than at any point previous, over a stellar but short 33 minute selection of beats. Though he does share the spotlight at times with dope artists like Chaundon on “Success (Part 1)” and Von Pea on “F.U.B.U.” it’s nice to hear him spitting for dolo on his on tracks on “Andy Kaufman.”

“I’m agitated, they fabricated like Tony Clifton
But got enough folks willin to fold and throw they chips in
The whole mission to trick, the whole system
Assisted by those missin the point like broke scissors
Bitch you sloppy in the cut like they fixed it with no stitches
Yeah we all AllStars but not the type that you wanna wish on
Callin all cars, Doc just went rogue
The globe shift into a climate where they won’t rewind it
More inclined to skip it, shit
It’s not a hobby, this is my +World+, and I’m +Bobby+”

For those not old enough to get the references, look up the sitcom “Taxi” then look up the movie “Man on the Moon” and go from there. His point doesn’t really need the cultural allusions though, because the beat is dope and flow is on point, putting across the fact that hip-hop has gone whack and needs to be brought back. That’s a recurring theme throughout “I Think That…” found on songs like “Genuine” featuring Blacastan and hip-hop legend Wise Intelligent. There’s a strong emphasis on bringing back a bygone era here, hip-hop songs which have a point and not just a good beat and a catchy hook. That establishes an unusual amount of integrity for A.D. as a producer, considering how many will sell their beats to anybody who pays no matter how ignorant what they have to say is.

The Doctor is just as serious about his microphone skills though, to the point he’ll actually step aside and let other producers put down beats for him, resulting in the marink laced “Baby Momma” and the Deheb styled “Whole World” on this EP. While some of Dr. Dre’s earliest efforts on the mic seemed stilted and his peers joked that he should “stick to producin’,” A.D. seems a natural at rapping from day one – which probably comes from ciphering with his fellow Brown Bag AllStars. This is a good start and hopefully a sign of more to come when his LP “Doctorin” drops later this month.