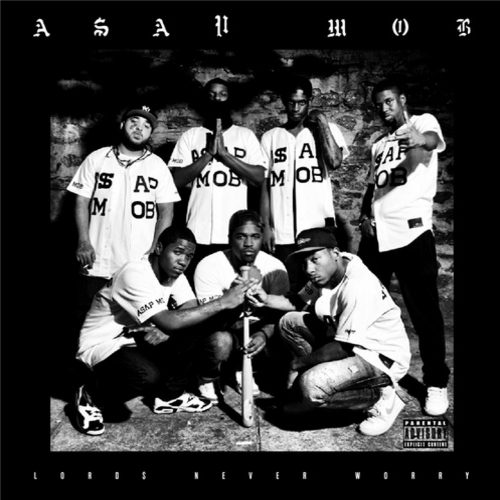 With the exception of the Goodie Mob (which was assumedly an acronym for ‘the good die mostly over bullshit’), the ‘mob’ in rap music typically follows a solo star, usually consisting of longtime crew members or constituting a new camp: Da Lench Mob (Ice Cube), Facemob (Scarface), Mob Figaz (C-Bo), Speedknot Mobstaz (Twista). It might seem similar with A$AP Mob, the Harlem-centered collective whose A$AP Rocky skyrocketed to fame a little over a year ago, but as those more familiar with the phenomenon know, A$AP has been around before Rocky, not necessarily as a group of musicians but definitely as a clique of cool kids a young Rakim Mayers once looked up to. It was the A$AP Mob who gave A$AP Rocky his name, not the other way around.

Nevertheless “Lord$ Never Worry” adheres in an almost old-fashioned way to the logic of the music business, gathering all rapping and producing A$AP Rocky affiliates on one promotional mixtape. What some years ago would have merely been a deja-vu is now an exciting prospect, because these guys are definitely on some other shit. Previously A$AP Rocky attracted attention with his artistic affinity to Houston rap. “Lord$ Never Worry” proves conclusively that the crew is even deeper into obscure (at least from a NY-centric perspective) regional rap than “LiveLoveA$AP” hinted at.

“Lord$ Never Worry” is a throwback deluxe to 1995-2005. A$AP Ferg has soaked up just about every bizarre rap style that ever surfaced between Sacramento and Memphis. One single verse into the album, A$AP Rocky has already checked No Limit and Cash Money. And A$AP Ant and A$AP Nast have a ruggishness to their thuggishness compared to the mass manufactured 50 Cent models of the last decade. Optimistically put, A$AP Mob is a big step on New York rap’s long way back to the grime and the gutter. It’s nothing short of poetic justice that much of that is due to an old school South Coast and Midwestern influence, styles that once were shunned by many of an Empire State of Mind. But a lot of things happened since those days. Harlem’s own Diplomats certainly didn’t turn their nose up at the South, and neither does the Mob forget about its immediate predecessors. Things come full circle when DipSet Capo Jim Jones passes the torch to A$AP Rocky with the words “You sound like me in my heyday” on the Clams Casino-produced “Freeze.”

Meanwhile A$AP Twelvyy drops Harlem references from Rich Porter to Mason Betha over an unholy matrimony of dance-derived synths and a trunk-rattling rhythm section courtesy of AraabMuzik (who was basically put on by the Diplomats) on “Y.N.R.E.”:

“I’m feelin’ like Rich with the duffle
Bricks on the shelf
Yams like, ‘Twelve
you better stay out of trouble’
Crew is Paid in Full, no snitch in the huddle
A$AP Mob, money mixed with the muscle
Dollars fallin’ from the sky, Harlem on the rise
On some Sparta shit, you don’t want no problem with these guys”

While on memory lane, Twelvyy and Da$h quote “Shook Ones” on “Jay Reed” as P On The Boards samples “Infamous” style drums. But the ultimate act of reverence is when Ferg and Rocky offer their services to who they consider the “King of New York,” Raekwon, on “Underground Killa$,” scored by Benson Graves with a conservative arrangement of stuttering piano and drums.

The producers don’t necessarily follow the rappers all the way back, but they all master the dark hip-hop arts. Musical highlights include Silky Johnson’s hypnotic harmonica sample for Rocky’s “Thuggin’ Noise,” 183rd’s cinematic horn loop for the roll call “Full Metal Jacket,” and Chinza//Fly’s steady synth laser beams for Ferg’s “Work.” Milo takes a more complex approach with Ant’s “The Way it Go,” distorting sounds to a surreal effect, while VERYRVRE adds subtle changes to the somewhat spiritual seance that is Ferg’s “Persian Wine.”

Overall the tape is an excellent approximation of existing rap formulas. It is also a litmus test for A$AP fan loyalty. Rocky’s “Purple Kisses” is reminiscent of his solo material, but “Bath Salt,” a chilling collaboration with Flatbush ZOMBiES, proves that “that pretty motherfucker” can also be a PRETTY GRITTY mofo. Which raises several questions: How much Three 6, Bone Thugs and Lynch Hung are today’s nestlings who tweet the word about the latest rap trends able to take? Do they even care where A$AP Mob got their styles from? Is there potential for something truly unique to develop or will it remain forever retro rap?

Once you accept that no idea’s original, though, “Lord$ Never Worry” makes quite a bit of sense. A$AP Mob does what rap has always done, recycling and reinterpreting without blinders on. As a result, from an informed perspective, their material is immediately familiar but still has a current touch to it. However, at this point A$AP’s artistic output mainly sounds and looks cool, while substance is still scarce. The rise and fall of the Diplomats shall serve them as a warning.