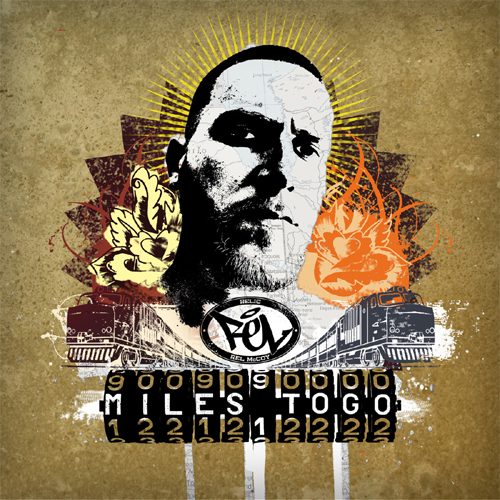 Relic has undergone a slight change since he last checked in with RapReviews in 2009 and now has a new pseudonym – Rel McCoy. The two appear to be interchangeable though and that’s a good thing, since I really don’t want Relic being confused with the German house band Real McCoy who had crossover success with the song “Another Night” in the 1990’s. Nothing against Real McCoy mind you – they’re the kind of music you’d hear in a glow stick waving warehouse party – while Relic is music for a smoke-filled underground hip-hop club.

“Check it out – I was sold when I was 10 years old
First time I heard “Roxanne” and UTFO
In them days kids rocked K waves, and I was makin pause tapes
to the hip-hop that radio played
Now – fast forward six years away
I was a Rakim disciple with a Cameo fade
Two decks on layaway, waitin to get paid
It was cheaper to turn a piece of paper to rhyme page
Gettin giddy watchin rap videos
Tryin hard not to miss any artist, on Arsenio
I studied rappers I had come to respect
And mumbled KRS’ verses under my breath…”

Adjust the age a year younger, substitute Melle Mel for UTFO, and note I never had a fade – other than that Relic is essentially telling my life story with “Work of Heart.” I never did get a set of turntables, but I made the pause tapes (still have some) and definitely got giddy for any new rap video I saw on TV at that age. Relic is intentionally or not playing to my bias on “Miles to Go” by professing his love for hip-hop music and culture. You’d certainly have to love it to go to the lengths Relic does, as he’s a self-produced rapper who hails from the cold clime of Brampton, Ontario. When he dropped “The Green Light” a few years back it was his coming out party, as to that point he was better known as a producer for other Canadian acts. Songs like “Laugh Lines” he can be seen as a true lyricist in his own right:

“I wanted to be a man early, so when I was 8
I borrowed my dad’s blade and thought I knew how to shave
And ended up, with a cut in my face – I’m still the same
Biting off more than I can chew and can’t stand the taste
I’m too +Macho+, +Man+, rest in peace
I ain’t tryin to take your place on the top rope
Or stoppin my foes with an elbow drop, no
The many mistakes made here makes it hard to say OOH YEAH
I cried tears through the fights that I choose
Bruised knuckles and a bloody nose
I chuckle at it now…”

If you had to pinpoint two emcees that Relic sounds similar to, he’d be a mixture of Common’s cool Chicago flow with the laid back California macking of Takbir (Styles of Beyond). That makes him audibly pleasurable to your ear hole, and his production chops only enhances the flow. When you’re critically acclaimed for your work with other artists (such as Shad) as a producer, it tends to be not just that you create good instrumentals but that you know how to find the right mood for each song and blend it so that the lyrics don’t overpower the beat or vice versa. From the jazzy piano of the title track (actually the album’s closer), to the guitar licks and boom bap of “The Goodness,” to the unorthdox oriental instrumentation of “Out of the Blue,” Relic finds the perfect notes time and time again. “The Extra Mile” featuring Brotha Soul sounds like a 1990’s hip-hop throwback track for all the right reasons.

Guests are kept to a minimal so that Relic can get his shine on “Miles to Go,” but the few that do appear are quality, such as Mr. J. Medeiros on “The Valley” or the aforementioned Shad along with Ghettosocks on “Down & Dirty.” After listening to this album several times I’m so hard-pressed to find flaws that I’m actually forced to conclude that the only two ways Relic can exceed this are get even a little tighter on rhyme writing and make beats this quality or above to go with them. With the kind of momentum he’s shown in just the span of a few years, he’s well on his way to crafting a hip-hop classic.