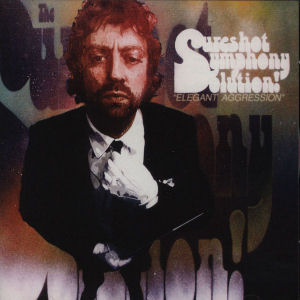 Sporting a suit, tie and white gloves fit for conducting a symphony and a burly beard and mustache befitting Movember, DJ Sureshot stands defiantly on the cover of “Elegant Aggression.” Without uttering a word, his eyes seem to scream “AND WHAT?!” He looks like he might slam a sousaphone on your head if you cross him. He personifies not only the title of his new album but the concept behind it as well, something his one sheet refers to as “blending hard-hitting hip hop beats seemlessly with lush live jazz-rock instrumentation.” Sureshot is applying lessons learned from his acid jazz debut as one half of the Sharpshooters debut in the 1990’s, plus fifteen years of experience that followed, into an album that seems poised to turn hip-hop on its ear. It is perhaps befitting then that Sureshot hails from Seattle – a place that seems to turn the musical world upside down every now and then. He teams with Moeses Soulright to “Hate the Real” with a passion:

“I always hear the phrase – ‘Feelin like a million bucks’
Well {fuck}, I’m feelin like my empty pockets do got the blues
Tell me if God offered you, anything you wanted
Would you even have to stop and ponder on it? [â€¦]
I stick to writing melancholy songs”

I hate to disagree with Moeses but he sounds defiant and frustrated on this song, not morose and melancholy. His life may be low enough to pen bars about his frustration, but Sureshot’s symphonic sounds lift him up and make it beautiful, all while he’s “sippin on this rum and Coke explaining you the way I feel.” Sureshot works with him again on the track “Tell Me What You See” and it’s a good pairing both times – a whole album between them would not be unwarranted. Sureshot is all over the map with his collaborations though, and for the most part they don’t get more mainstream than Ohmega Watts on “Half Man, Half Bionic.” Actually I’m ribbing you dear reader, because Ohmega Watts isn’t mainstream at ALL. He’s further underground than a genetically enhanced mutant mole.

Sureshot doesn’t just rely on little heralded or unknown emcees for his musical collaborations. Funky soul singers like The Mighty Pope lend pipes to “Mr. Fortune & Fame,” while reggae crooners like Noel Ellis bless the riddim on “Singing Memories.” Some songs eschew a guest altogether and certainly aren’t hurting for the lack of one. In fact it’s that much easier to enjoy the buzz of the suggestively titled “Four Twenty” when you can feel the 70’s guitars and brassy horns colliding with an energetic toe-tapping rap drumbeat and echoing sound effects. People bandy the term “acid jazz” around a lot without really knowing or understanding what it is, but this song epitomizes what it could and SHOULD be – two different arts fusing beautifully into one.

Now let me be perfectly clear about this – if you’re expecting The Sureshot Symphony Solution’s music to be what we’d all call a “rap album” in the traditional sense you’re barking up the wrong tree. In fact “You Can’t Keep Running Away From Love” featuring Myron & E might be the furthest thing possible from that. And yet if we go back to the roots of hip-hop’s musical side in its earliest days, when it was all about reinterpreting and reinventing what people already thought of as music, DJ Sureshot is clearly carrying on the spirit of hip-hop on “Elegant Aggression.” This is nearly an hour of music, but it goes by at twice that speed and demands a second listen. It’s got an undeniable cool that would make it a perfect summer record, though it came out after summer was technically already over on September 25th. That’s okay – buy it now, enjoy it, and bring it back out for your block party in 2013.