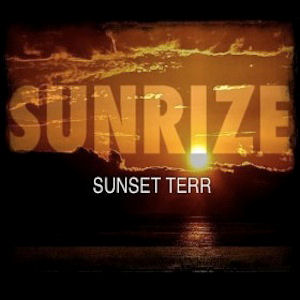 It took them three years to do it, but Sunsett Terr said their debut was “A Prelude” to things to come, and “Sunrize” delivers on that promise in a BIG way. Quite frankly I was intimidated by the time I was done ripping this album for review –TWO discs, 29 songs and nearly two hours of music in total. My fears were somewhat calmed reading Sirota’s reviewthough with comments like these: “The album does not hide the group’s camaraderie; they revel in their enjoyment of hip-hop; they laugh out loud at each other’s bad puns.” If I’m going to sit through two hours of one group, it at least helps to know that their previous effort showed they tend to work well together.

“Archways” eases my concerns more, kicking off the album with a mellow understated instrumental by Tilden Dexter, working in pleasant jazz notes and sax riffs. The beats are paired with refreshing lines like “no need to blind you with ice with lyrics this nice.” The second verse is a little awkward, but it’s that “on beat, off beat” Masta Ace style of rapping, so even when it seems to be falling apart it’s really not. The group’s members (LK, Dexter and Jay Biggz) seem well grounded and humble, noting that “Even Tony Starks was an alcoholic Iron Man,” an allusion to the fact that any man or woman you view as a hero in or outside of hip-hop is flawed. (Even this line is flawed, since there’s actually no S at the end of Stark’s name. That’s an invention of Ghostface Killah.)

Through the massive “Sunrize” album the Washington D.C. group gives off a jazzy, Digable Planets like vibe – something they even reference in the song “Jazz Town” with the line “It’s the +Rebirth of Slick+ and we +Cool Like Dat+.” As noted in their previous review, Sunset Terr believe in presenting a positive vibe and message in their music, to the point that there’s no parental advisory sticker and no need for one. I can’t imagine any way throwing out curse words would enhance the slow bopping “King Tut” for example, complete with their “so cornball they’re charming” punchlines like “put me on a bag of cheese, call me Chester.” There’s a feel of Egyptology to the song on the whole not seen prominently in rap since the early 1990’s – something I wouldn’t mind making a comeback – and the Flavor Flav and James Brown samples only enhance the feeling.

Tilden Dexter handles the production for the entirety of disc one, turning things over to LK on disc two save for “Trash Cans” produced by Young Raven. My favorites on the first disc include “Food for Thought – whose opening reminds me of “Wall Market” from Final Fantasy 7 – the uptempo “Where You Gonna Run” (with the obvious Run-D.M.C. sample) mocking wannabe gangsters and thugs, the precise slicing bass of “Verbal Scalpel” and the aptly titled “Grand Denouement” to end this half of the presentation. Disc two includes the pounding beats of “Let’s Get It” (which almost seems to be sampling Ace’s “Born to Roll”), the comic book inspired “Just Us League,” the epic story of “Mary” and “Trash Cans” featuring Reggie Mack, one of the most chill tracks in the entire two hours of the presentation.

As much as I appreciate where Sunset Terr is coming from, particularly their classic and progressive hip-hop inspirations, and their constant desire to stay positive in the face of so many negative messages out there – I regret to say that two hours is just TOO MUCH. This is not a conclusion I came to easily since there are so many double disc albums that get this tag, and I didn’t want to trot it out one more time without giving Sunset Terr the chance to exceed expectations. They do exceed them, but disc two in particular is littered with forgettable songs like the banal “Flows On My Mind” and the regrettable AutoTune effects and electronic sounds of “Tooth Decay.” If this were only a one disc album, “Sunrize” would clock in as “slightly above average” for the opening fold of the tray and “slightly below average” for the CD beneath. I respect what Sunset Terr has to offer so I really hope that on their next album they’ll subdue their ambitions just a tad.