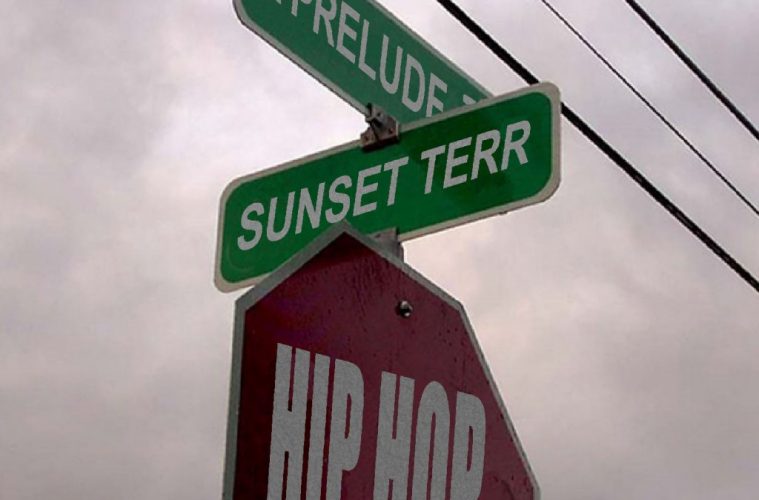 Throughout Sunset Terr’s debut, “A Prelude to Sunset Terr,” this DC Metro hip-hop foursome, comprised of producer/rapper LK and MCs Tilden, Dexter, Jay Biggz, and Aapex, brag about the fact that they don’t curse. I don’t think anything is wrong with cursing. I fucking curse all the time. For no reason. Cock. Nothing’s wrong with swearing. And usually, I wouldn’t take well to this sort of petty moralizing. Just last week, I panned Khalil’s debut for its self-righteous piety. The point is, I should hate this album.

But I don’t hate this album. I like this album. A lot. While I usually am not so into MCs that mostly rap about rapping and how they are much better and nicer and smarter rappers than everyone else, there are a few things about “Prelude” that get me past this b-boy posturing to the point that I actually find it charming.

The first thing that makes “PST” more than a typical album is the production. If you locked Danger Mouse, Prince Paul, El-P and the Postal Service in a room together, the result would sound something like this record. The production is traditional in its roots. The percussion tends to stick to the basics, and adeptly so, but the melody is packed to the brim which futuristic synth hooks, plus lots of bloops, bleeps and waves, that make the music at one intoxicating and distinct. The opening track, “P.I.F.F. Intro,” features boom-bap drums under a clubby hook, ominous clap, and dial-up-modem sound. The four rappers spit joyful self-touting knowledge, reminiscent of De La Soul. The combination of this innovative production and old school flow makes for an intriguing blend. Like Mos Def, De La, and Delphonic, Sunset Terr is able to innovate by rapping about traditional topics while jumping to the next century with their production. The success of this album comes largely from the fact that this group resisted the temptation to blandly pay homage to the old school, and instead crocheted old images into new fabric.

“Prelude” is also refreshing simply because the rappers obviously had so much fun making the album. To someone reading the lyrics, it may look like this D.C. crew as stagnant and preachy, but this is why music is meant to be heard first and read only for clarification. On “Where You At?” for example, the group jacks a call-and-response chorus from hip-hop days of yore while criticizing drugs and gangster rap, but are so full of humor and cheer that it almost sounds like they are at once mocking and paying tribute to their roots. Sunset Terr is having such a good time that they come across as good-natured, not self-righteous. The album does not hide the group’s camaraderie; they revel in their enjoyment of hip-hop; they laugh out loud at each other’s bad puns (“Change my name to LOL cuz all I hear is ‘Dang!'”); they constantly give each other shout-outs that come across as heartfelt, not opportunistic.

Plus, this quartet’s debut is not all conscious, old-school rap. It also features some genuine soul-searching, jokey tributes to fat girls, and awkward sexual bravado. While perhaps there is still a bit too much meta-rap for my tastes, these divergences help to provide the record with balance.

“A Prelude to Sunset Terr” really throws a wrench in the theory I espoused last week that positive, old hip-hop tends to be boring and condescending. Sunset Terr has created an album that, while perhaps somewhat lyrically plain, criticizes the f-word while maintaining its ingenuity.