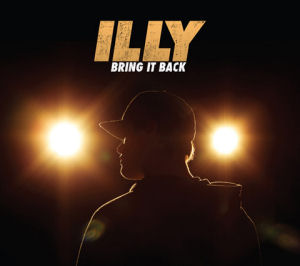 Illy :: Bring It Back

Illy’s “Long Story Short” was one of my favorite albums of 2009 – not just from the Melbourne scene, not just from Australia, but from anywhere in the world people appreciate hip-hop music and culture. His album was the personification of both, and offered those from the States who still sleep on their “Down Under” counterparts a serious wake-up call. Even though it’s not practical for most Aussie artists to tour any further than New Zealand, if Illy comes to any part of North America and you love hip-hop, you owe it to yourself to be at his show. If you live in his neck of the woods, no excuses, you should have already been to one already and own an autographed t-shirt.

Suffice it to say I’m biased toward Illy already, but “Bring It Back” gives me no reason not to continue to be. Production is largely split throughout between M-Phazes and Trials, though Taku gets a co-credit on “All the Above” featuring Thundamentals and “The Bridge” featuring Elemont and Reason, while One Above does “Heard It All” and Billy Hoyle does “Check It Out.” If the song titles sound like hip-hop cliches, that’s not really a bad thing, as Illy fancies himself a throwback to an era where your lyrical skills mattered more than the make of your car or size of your rims. The title track addresses this topic head on.

“Yo – ‘We’re losing ’em’ – the call rang out
Only a few ran for helping hands, most dudes stared blankly
Standing mute, fame whores off where the new fad’s at
While fans cry ‘Bring that boom bap back!’
Saw lines crossed between hip-hop dudes and dance acts
so I U-turned my ass out the booth
Told my label ‘New plan! I’ma take it to my roots
with the new jam, after that, resume programming’
So I gathered beats, got at emcees, mapped the strategy out
“The Chase” sequel’s in the background for now, sorry!
A little longer until that album’s out
Doubters can either back down, tap out or bounce
Either way, pay that no mind, our two cents bound to count
UHH, their two cents get rounded down
UHH, this for the love of the rap
Breathe it life ’til our lungs collapse, and bring it back like that”

The best and/or funniest line in the song is probably “Two year Facebook careers don’t entitle you to rap about your haters” – and it’s also THE TRUTH. Lest you think he’s got a big head though, Illy also goes out of his way to humble himself in the third verse by noting “Ain’t sayin I’m the savior – just sayin I’m invested in whatever’s comin later.” It’s far too rare to find a rap artist with their head that well screwed on – deeply passionate about the arts but not possessed with a Messianic complex that he or she is the only one who can “save” hip-hop. The truth is that we’ve all got to move past this idea that it needs saving anyway – despite whatever’s being played on TV or the radio albums like “Bring It Back” and songs like “Check It Out.” I was hoping for a sample of “Runnin'” by The Pharcyde and Illy did not disappoint.

“Yeah – laid back in the cut, blunt and a brew
Man all over the world they’re pumpin our tunes – from where you’d rather be
Say it’s unfair? Then come here dude
Cause each hour the sun’s settin somewhere new
Get fly, fuck a commute – at least for now
Cause real life can fuck up your view
And real life gon’ be back all up in it soon
It ain’t perfect, but all said, what can you do?
This is love and the truth”

It would be an overstatement to say Illy is the Australian version of Black Thought, especially given he doesn’t have the “criti-cal with every sylla-ble from the Illa-del” flow, but the one reason I will advocate the comparison is that both artists have a natural self-assuance that comes across in their delivery. As he says on “Say it to Me” it’s pretty simple for him: “I made the music I wanted, gave a fuck who’s watchin.” When you’re packing that kind of confidence and you have a pleasant vocal tone and well written words, all you need is music that’s at your level. You could mistake the brash beats of “Say it to Me” for a “Fizzyology” song in the best way, which makes his humility lyrically all the more surprising when he says “It took near a decade to find my voice.” You wouldn’t think so listening to him.

Illy brings in plenty of compadres to enjoy the party, such as Pez on “Where Ya Been” and Mantra & Grey Ghost on “The Real” not to mention the all star bonus track “6 Shooters.” There’s no question that he’s showing love to Australian hip-hop, and that he doesn’t think he’s top shit on that scene, but he’s far better than he lets himself believe and rival to any of the top emcees rapping anywhere in the world. The only thing that keeps Illy for being as well known as Jay-Z is that he refuses to compromise a single thing to become a crossover star. It may hold him back commercially but it won’t make albums like “Bring It Back” any less compelling.